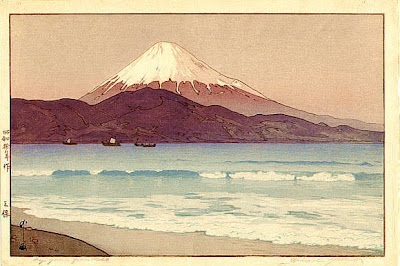 Text: On Mt Fuji, from Nihon Hyakumeizan (One Hundred Mountains of Japan) by Fukada Kyūya (1964):

It is extraordinary that such a mountain should have erupted from our small island country. Kojima Usui, whose pen was untiring on the subject of Fuji, had this to say: "The arc described from the contour of the summit shrine, some ten thousand feet above sea level, down to Ōmiya, at the foot of the main route up the mountain – this arc, slanting, somewhat steeply yet always in an easy, serene, almost carefree way, across a flawless sky – this gigantic line is, except for the sea horizon, the mightiest that the eye will ever see in this country."
Posted by Project Hyakumeizan at 9:00 PM 9 comments: