Mountain at the end of time

Who was first? Could it have been Konji? Or Ransatsu? Both monks climbed Mt Fuji before or around the mid-eleventh century. But nobody can say with certainty who made the earliest ascent, since none of the pioneers left a record of his feat. 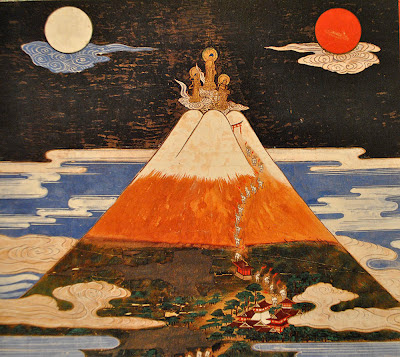 Mt Fuji was no soft touch in those days. A would-be climber first had to brave the trackless wildwood that shrouded the mountain's flanks, the bears and wild boar crashing away through the undergrowth.

Then the endless upper slopes, slip-sliding in the ash and menaced by tottering lava-boulders. At last, more dead than alive from the cold wind and thin air, the monks might have forced a way to the volcano's rim and looked down into the cobalt-blue crater lake, its waters still seething with the heat of recent eruptions.

Perhaps it shouldn't be surprising that these pilgrims never documented their adventures. Making a name for themselves was the last thing on their minds. Rather, their mission was nothing less than to prepare for the end of the world - a period of decay fated to begin in the year 1052.

All Buddhist traditions agreed that the founder's teachings, the Dharma, would degenerate with time. Chinese scholars thought that the True Dharma would last for no longer than five centuries after the Buddha's death. After that, the authentic faith would give way to mere Semblance Dharma.

Then would come the Final Age, when the Buddha's teachings would be altogether forgotten. And this period of decadence would start just one millennium after the Buddha's death - a terminus that most judged would fall in the middle of the eleventh century. 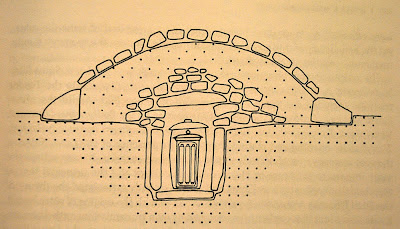 In these Latter Days of the Law, how should a pious monk seek to preserve the Buddha's words? One answer was to bury them, as if in a time capsule, to await future ages or even the return of the Miroku himself. The first to make the attempt is said to be Ennin (794-864), a Tendai patriarch who copied the Lotus Sutra and enshrined it in a small stupa atop Mount Hiei, Kyoto's guardian mountain, in 831.

Even before the Latter Days dawned, sacred scrolls were being buried all over Japan. Sutra inhumations are known from Kyushu to as far north as Dewa and Mutsu. The texts were inscribed on paper or silk scrolls in rich inks that were occasionally mixed with blood.

Ennin himself is said to have gone into retreat for three years to carry out his transcription. He grew the hemp to make the paper for his scroll, wove together his own brush out of twigs and grass rather than use animal hairs, and performed three full prostrations before writing each character.

Sutras were typically buried within temple grounds or atop mountains, there to await the Buddha's return. "I have erected a three shaku-high statue of Miroku on Yasugamine (one of the seven great mountains of Japan)," recorded a monk named Jōe in 1082, "and have transcribed a Lotus Sutra to be buried there. My prayer is that it will be used when Miroku comes to preach the Dharma beneath the Dragon Flower Tree…"

During their heyday, from the middle of the eleventh century to the middle of the twelfth, some 170-odd sutra inhumations are thought to have taken place in Japan. (The practice was unknown elsewhere in Asia.) And, even before this period, a bold monk thought of burying a sutra-bearing reliquary as close to Miroku's Tosotsu heaven as would be possible anywhere in the realm. The timing was right. After the huge eruptions of the Jōgan era (859-877), Mt Fuji settled into quiescence, with one last outburst in 1083. Now the way was (more or less) clear for a pioneering ascent.

A newly discovered record reveals that Monk Ransatsu visited the summit in the year 983, followed by Nichidai in 1057. (Monk Konji also made the ascent, but his climb is undated.) Nichidai brought with him sacred texts in gold script and placed them in a cave near the summit. When Monk Matsudai climbed to the summit a century later and rediscovered the cave, he was moved to tears at his predecessor's devotion.

One of these monks did succeed in transmitting the Buddha's teachings to a future age. In 1930, bronze artefacts and a number of scrolls all inscribed in vermilion ink were discovered in a cave to the south of Mishima-ga-dake, one of the eight "petals" of Mt Fuji's crater rim.

D. Max Moerman, The Death of the Dharma: Buddhist Sutra Burials in Early Medieval Japan. Black and white images of sutra burial and reliquaries are from this article.

Shizuoka-Yamanashi Joint Council for Mount Fuji World Cultural Heritage Registration, Mt Fuji: The Wellspring of our Faith and Arts. Header image of a Mt Fuji mandala is from this book.