The river is never the same (1)

How two sawa-nauts learned respect for the Kurobe

The weather wasn’t to blame: the forenoon sun, roaring down from a cloudless sky, had bleached all colour from the landscape. Nor was our pace anything to fret about; yomping under ferry-weight packs, we’d easily make the boat across the lake. If the two of us weren’t fit enough for the Kurobe River, we never would be. Yet something still bothered me. 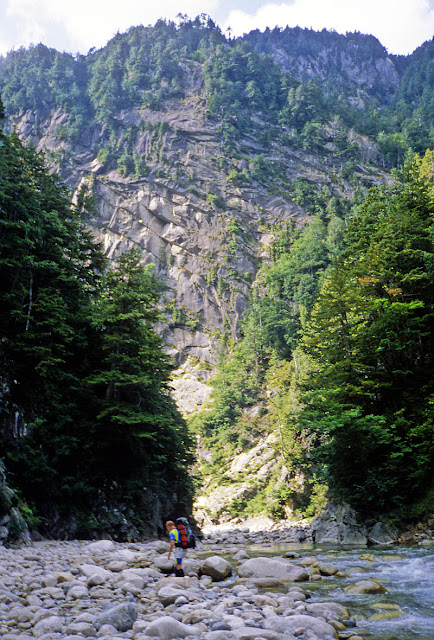 We’d left Shinjuku at 2am to start the five-hour run to the Northern Alps, the weatherbeaten Subaru lurching out into Kabuki-chō’s rush hour. Caspar had come straight from a bar: strictly business, he explained. I wasn’t afraid that lack of sleep would affect him – a few months back, he’d helmed a yacht through a particularly knockabout iteration of the Sydney-Hobart race. No, it was more the attitude that unsettled. I mean, if the Kurobe River and the Southern Ocean have one thing in common, it’s that nobody disses them.

On the once-a-day boat across the lake, we were the only passengers. This too gave me mixed feelings. On one hand, too much company might diminish the majesty of the wild Upper Corridor, the river gorge through the corrugated heart of Japan’s Northern Alps. On the other, if anything happened, the nearest hut was a day away and the mountains would muffle any bleating from radios or phones – not that we were carrying either. Time, though, was pressing – we were both due to leave Japan soon, and this was our last chance to explore the great river. 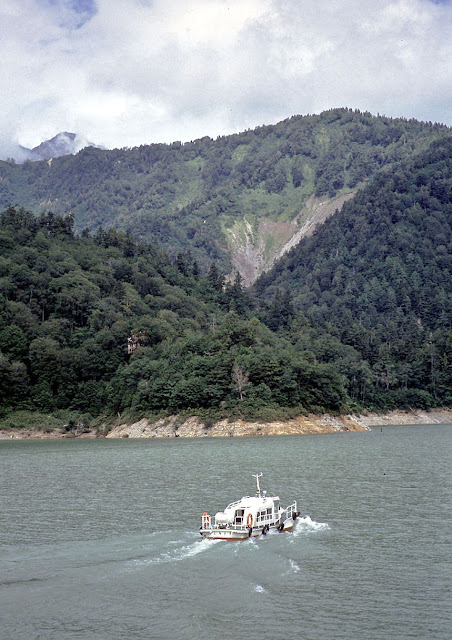 Two hours later, we’d gone as far as paths would take us. From here, it was us and the river. We swung our packs onto the river-smoothed gravel and assumed the guise of sawa-nauts; in my case, UV-faded polypro mountaineering clothes hiding a sawn-off wetsuit; a natty banana-hued ensemble for Caspar. Felt-soled sawa shoes replaced hiking boots. We put on climbing harnesses too, but no helmets – they drag your head down when filled with water.

The Upper Corridor of the Kurobe River lures you in gently. Like the immaculately raked approach to a shrine, an expanse of white cobbles leads towards the layered cliffs of Kuro-pinga. We walked to its end and crossed the river in water that was barely knee-deep. Perhaps this would be easy.

Soon we were disabused. Dry land ran out in the cliff’s shadow, where the river bends sharply and pinches down into a gorge. The river had to be crossed again, this time above a cheese-grater set of rapids that promised to punish any slip-up. Level with us, the river slid by like a green slab of steel on some monstrous high-speed production line. In its headlong drive towards the Japan Sea, the Kurobe didn’t seem to leave much scope for negotiating a crossing.

I doffed my pack again, uncoiled the dayglow pink rope, and tied it unhastily into my harness loop. To tell the truth, I wasn’t in a hurry to try conclusions with this river. When Caspar had taken up what I hoped was a firm stance behind a boulder, I waded into the racing green waves, eyes fixed on the far bank to avoid disorientation, and launched myself across the channel, like a human rescue rocket. As the rope twanged taut, dragging me off my footing, a bowshock of green water smacked me in the face. 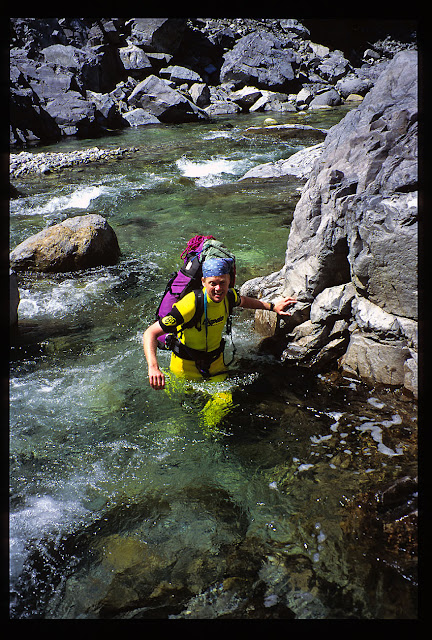 Struggling to my feet and wiping the water from my eyes, I found myself in the shallows, back where I’d started. A second try, and again the river swept me contemptuously aside. Like I said, nobody disses the Kurobe, but the sentiment isn’t necessarily reciprocated. Yet we had to get across if we wanted to reach our bivvy site before nightfall.

Something different was needed. Forget the rescue rocket; instead, I would angle myself like a paravane, getting the current to swing me across the channel. Warning Caspar, I walked into the river again. When the green firehose hit, I felt the rope stretch, as if soaking up the shock of a climbing fall – it thrummed with the strain – but the ploy worked. Staggering up the opposite bank, the river cascading from my gear, I set about finding a belay.

Then it was Caspar’s turn for the laundromat. As he lurched to his feet at the end of the rope, water sluicing from all freeing ports, I saw respect in the eyes of a man who had faced down the yacht-smashing waves of the Southern Ocean. “You know,” he said, after he'd sufficiently recovered himself, “when you kited yourself across the river, the rope was slowly dragging me over the boulder. The friction of my kneepads was the only thing still holding us.” Now it was my turn to be thoughtful.

Posted by Project Hyakumeizan at 5:38 PM No comments: