4 November: from a nearby thicket reverberates a roar. Not your tentative, throat-clearing, osore-irimasu kind of growl, but the full-tilt boogie woogie, Metro-Goldwyn-Mayer r-r-roar of an apex predator. Less than an hour after starting, we seem to have disturbed a beast who resents our presence. 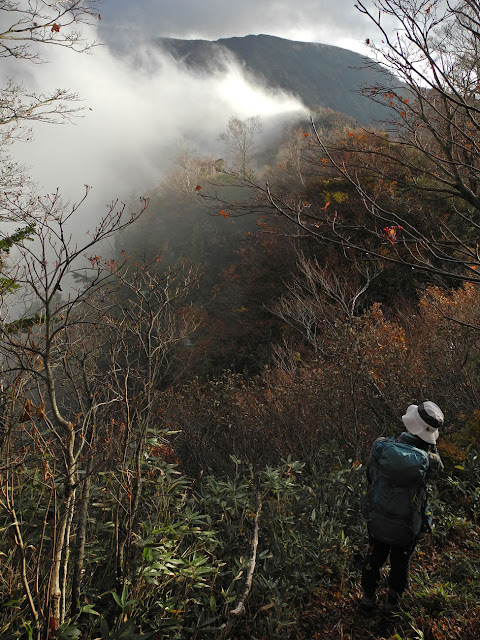 “Was that a bear?” I ask the Sensei, somewhat superfluously. “Probably,” she replies, sounding unimpressed, as if dealing with just another unruly pupil from her middle school teaching days. I am reassured: if that bear happens to be sporting a non-standard haircut, it will be ill-advised indeed to come out from that thicket. 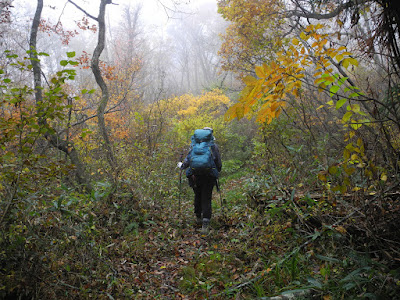 Plodding on upwards under the dripping beeches, I start to see where the bear is coming from. For half a century, the animal – or its forebears – had this ridge to itself. The path for humans washed out in 1937 and wasn’t restored until the 1980s. Even today, it is far less frequented than the standard route up Hakusan, for reasons we will soon appreciate.

The bear has made its point. This is not a hiking trail. Rather, it is a Zenjōdō, a Way of Righteousness. And those who tread it will undergo various tests and tribulations until they reach some higher level of awareness. Or fall by the Wayside. The latter outcome can’t be ruled out, laden as we are by four or five litres of water, sleeping bags and cooking gear. 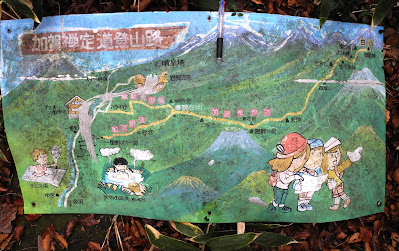 Hakusan, a sacred mountain, has three Zenjōdō, but the one we are attempting, from the Kaga side, is the longest and most rugged. We are heavily loaded because – unless we opt for trail-running – we’ll need to stay in the Oku-Nagakura bivouac hut, which is innocent even of a water source. The pack is starting to become a trial in itself.

At least the weather front has gone by, even if the clouds haven’t yet cleared. For November, it’s warm. “In the old days,” I observe to the Sensei, “you’d have seen frost pillars poking up out of the ground by now.” Always, people should be careful what they wish for. 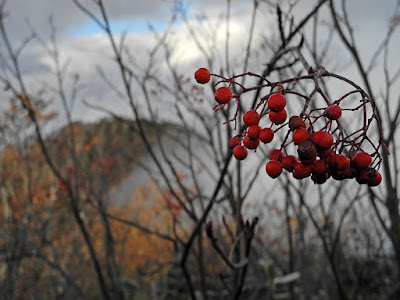 We come up to a little shrine, shrouded in mist and watched over by a stand of evergreens – hinoki, says the Sensei, good for making storage chests. The girth and stature of these noble trees suggest what might have been if too many hadn’t been made into chests and temple pillars in centuries gone by.

The path levels out, stray sunbeams slant in below the drifting cloudwrack, and even our watch altimeters strike an optimistic note: they now read within a hundred metres of the hut’s altitude. 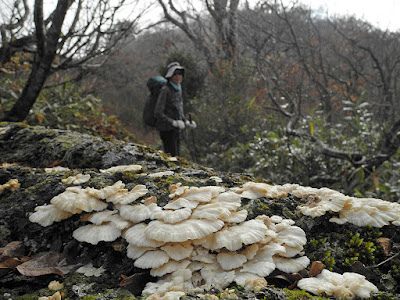 Alas, we are deluded: just as the digital readout says we are almost there, the path sinks away towards a deep col and, like pachinko players on a bad streak, we give up all of the last half-hour’s winnings. I recall reading somewhere that Hakusan is a “dissected edifice”. Naruhodo, like John Pierpoint Morgan’s stock market, this ridge will go up. And it will go down. But not necessarily in that order. 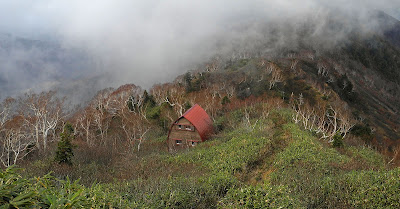 The hut is reached as the light starts to fade. The Sensei agrees that it’s been years since we’ve done anything like this. Nevertheless, she has the stove lit and the supper cooking before I have even managed to recombobulate myself. We slurp noodles by the light of our head-torches; I’d forgotten how quickly it gets dark in November around here.

Stepping outside after supper to address the bank of panda grass that fringes the hut, I find myself under a starry sky, Orion stretching up to the winter zenith, as he always did. The mountains have vanished into a void even darker than the sky, relieved only by the faraway strip of lights along the coastal plain. It’s going to be a cold night up here at 1,700 metres … 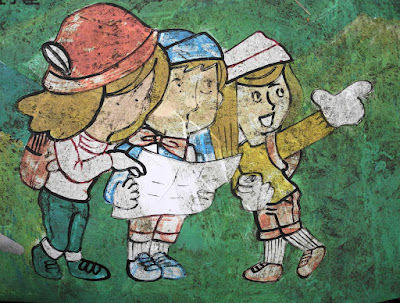 Posted by Project Hyakumeizan at 9:11 PM No comments:

3 November: somewhere near Nagano, the morning Kagayaki goes to ground in a tunnel. And there the super-express skulks while the authorities work out where Kim Jong-un’s latest projectile is going to land. We arrive in Tokyo with half an hour’s delay.

From Shinjuku station, it is necessary to hurry through the badlands of Kabuki-chō to an office near Shin-Okubo. To be late for this meeting would be unthinkable, as the participants are risking a mostly “in person” meeting for the first time in months, if not years. 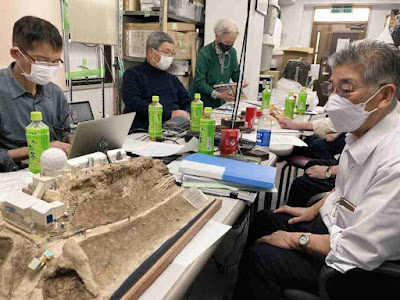 At 2pm, Dokiya-sensei calls us to order and the proceedings begin. The “Fuyō Nikki no kai” is dedicated to the memory of the meteorologist Nonaka Itaru and his wife Chiyoko, who sojourned on the summit of Mt Fuji in the winter of 1895 to make weather observations, holding out there for almost three months. Everybody at this meeting has some connection with this story, except perhaps for your blogger, who is merely representing the Sensei (otherwise occupied today).


As for the “Fuyō Nikki” (Mt Fuji diary) itself, this was the title of Chiyoko’s journal, which she published in a newspaper the year after the mountaintop adventure. A full English translation is forthcoming (watch this space), based on Ohmori Hisao’s definitive joint edition of Chiyoko’s journal and Itaru’s “Guide to Mt Fuji” (Fuji Annai).

Ohmori-san’s “kaisetsu” (introduction) to that edition is the starting point for anyone interested in the Nonakas’ story – he mentions today that it was based on painstaking trawls for contemporary newspaper articles preserved on microfilm in the Diet Library, conversations with legendary figures in the history of Mt Fuji such as Fujimura Ikuo, and more than one foray to the mountain in winter. Indeed, to fully appreciate the magnitude of the Nonakas’ achievement, it helps to have experienced Mt Fuji in full winter conditions. 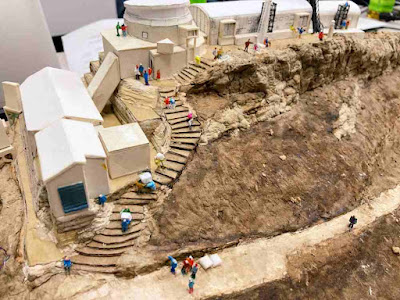 All this happened a long time ago, yet new details of the Nonaka story are still coming to light – for example, that the Japan Meteorological Association almost certainly admitted Chiyoko to its ranks, showing that Meiji-era scientists might have held remarkably progressive attitudes, at least in this case.


Across the table, Yamamoto-sensei puts up a slide of the cloth-bound ledger in which Itaru and Chiyoko recorded their weather observations in a neat copperplate hand – amazingly, these records have survived in good condition. No less remarkably, the ledger shows that temperature and barometer readings were set down every two hours, night and day, throughout the twelve-week stay on the mountain – only the wind speed data are incomplete, as the anemometer broke down along the way. 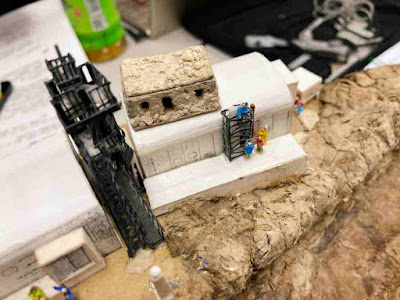 Sadly, no trace of the Nonakas’ tiny summit hut remains. Nakayama-sensei, who also runs the association’s website, brings out a paper model of the present summit station, which was constructed in the early 1960s, and shows us that one of its outlying buildings must have obliterated whatever remained of the Nonakas’ refuge. Oh dear, I’d hoped to find some relics one day.

In Japan, Itaru and Chiyoko have been celebrated – mainly for their exemplary “gaman” – in a stage play and a full-length movie, as well as several novels and two TV dramas. The story has seeped out into the English language too, first via contemporaries such as Lafcadio Hearn and latterly through at least one scholarly article and a recent feature in Alpinist magazine.

After being rescued from the frozen mountaintop in December 1895, Nonaka Itaru never did manage to build a bigger and better weather station, as he’d intended. For that reason, some have dismissed him as a dreamer. But his epic eighty-two days atop Mt. Fuji did start people thinking.

One who took note was a prince of the realm, who as a naval officer considered weather forecasting to be a military imperative. Almost four decades after the couple’s winter sojourn, the government decided to fund an observatory on Mt. Fuji. It was staffed year-round from 1932 to 2004, when automated instruments finally replaced the weathermen. 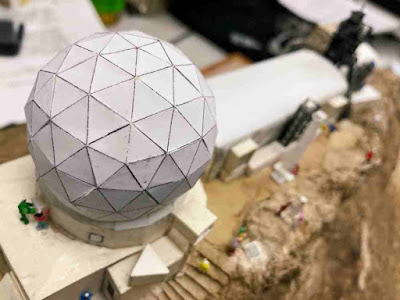 Not all the meteorologists welcomed that decision. It seemed a pity to waste seven decades of high-altitude experience when good use could still be made of those summit buildings. And so, the very next year, some of their number set up a non-profit organisation for the “Valid Utilization of the Mount Fuji Weather Station”. 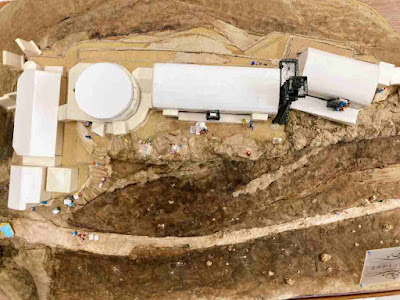 Since rebranded simply as the “Mt Fuji Research Station”, the summit buildings have been validly utilised every summer since 2007. And visiting researchers have published papers on topics ranging from altitude sickness to greenhouse gas concentrations and even the “sprites” that flash mysteriously upwards from thunderclouds. 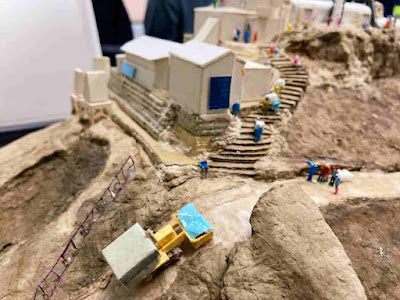 With her eyes twinkling over the regulation face mask, our chairperson seems to be a bit of a sprite herself. It seems that the “Fuyō Nikki no kai” is meeting in the offices of the MFRS, and that the memberships of the two committees overlap quite extensively.

I would like to ask Dokiya-sensei about this interesting liminal zone between Art and Science, Adventure and Literature, but, alas, the meeting ends before there is a chance to put the question. And now there is a four-hour Shinkansen journey ahead. Kim Jong-un won’t be accepted as an excuse if I’m unreasonably late for supper …
Posted by Project Hyakumeizan at 8:56 PM No comments:

2 November: the Boeing coasts in from the Japan Sea above Komatsu. Daisen has already slid away astern, a mere appetizer for the parade of famous mountains that now unfolds.
There, a crumpled sheet of green below, is Hakusan. And now the snow-dusted Northern Alps come up, hemming in the Kurobe valley, and beyond them extends the Fossa Magna, brimming with morning mist like a river of vapour.
Last, Asama volcano goes drifting by beneath the starboard wing. And, always, in the distance, that familiar cone floats on the horizon.
All this early-morning meizanology works up a thirst. On the ground at Narita, I slake it (yes, I know the Sensei would disapprove) with a vending machine coffee. “Boss is boss of them all since 1992” the can proclaims. 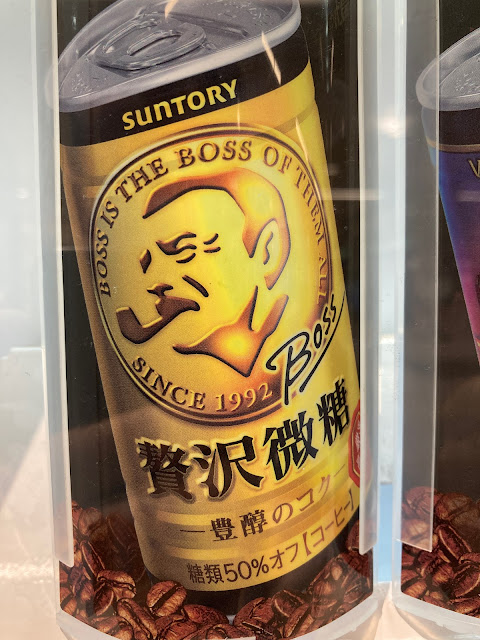 Later, the afternoon Shinkansen sweeps past that familiar cone, affording a closer view. Shouldn’t there be more snow at this time of year, I wonder. The only traces etch out the summit station’s bulldozer tracks in white zig-zags. 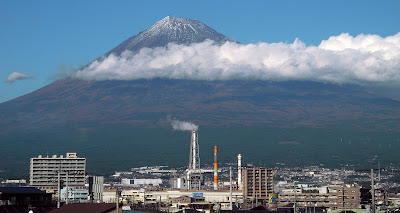 Yet, even when the mountain lacks its usual winter crown, those breath-taking skylines, that rakish tilt of the crater rim all proclaim one thing. When it comes to Meizan, Mt Fuji is the boss of them all. Since 100,000 years ago.
Posted by Project Hyakumeizan at 7:22 PM 1 comment: