Women who devour the earth

Again, the New York Times demonstrates its unfailingness. Tuesday’s edition documents how the ongoing eruptions on Kilauea have prompted an upsurge in reverence for Madame Pele, Hawaii’s goddess of volcanoes. Now this is a topic that cannot fail to rivet the attention of any aspirant meizanologist.

Pele, also known as “the woman who devours the earth”, has been worshipped for centuries in the Native Hawaiian culture. And respect for the deity is growing, even though – or because – lava from her favourite volcano is currently devouring forests, houses and even a power station. According to the NYT, a retired schoolteacher who lost her home described it as “an offering for Pele”.

To folks who live underneath one, rites and oblations to appease a volcano have always made sense. In medieval Japan, such ceremonies were raised to a fine art. During Mt Fuji’s ninth-century eruptions, the authorities offered the Great God Asama a more commodious shrine (in what is now Fujinomiya). Then, in 859, they promoted him to the senior grade of the third court rank. And when that didn’t placate him, they censured the governor of Kai for neglecting the proper rituals and demanded an apology on the god’s behalf.

At that time, the deity of Mt Fuji was most definitely a guy. But, in later centuries, his role was taken over by a goddess, Konohanasakuya-hime, the Princess of the Flowering Cherry Tree. How this transgendering happened need not detain us; what’s interesting here are the obvious parallels between the Princess and Madame Pele.

Both deities are rather senior in their respective pantheons. “We believe in 40,000 gods, but Pele is in the highest echelon for obvious reasons,” says a hula teacher and lecturer on Hawaiian culture quoted in the NYT, adding that “Pele created Hawaii; she is that primordial force that exists within all landmasses. And she can be vengeful, so watch out.”


For her part, Konosakuya is the wife of the god Ninigi (I’m relying on the usual online references here). Ninigi we’ve met before on this blog, as the deity who came down to earth on Takachiho, a volcano in Kyūshū, and founded the imperial line.

Like Pele, however, the Princess had to endure a troubled marriage, which may account for her volatile temperament. For she too can be somewhat vengeful: legend has her kicking over hapless Yatsu-ga-take because the older volcano had once presumed to be taller than Mt Fuji.

Intriguingly, Pele is said to be a shape-shifter who can easily appear in human form: “If you see her hitchhiking, pick her up. If you have a bottle of gin, even better. Pele, like her descendants, likes a little mischief,” suggests a Hawaiian evacuee, quoted in the NYT, who is waiting to see if the lava flow destroys her home.

This advice reminds me of an autumnal excursion to Mt Fuji. The official climbing season was long over; nobody was about. While sheltering from the bitter wind behind a boulder, we were overtaken by a little old lady, who was trotting up the mountain carrying a white shopping bag in each hand. As all the huts were closed, we couldn't imagine where she might be heading. And, since we weren't able to catch her up, we never found out.

You know, after reading that Times article, I rather regret that I didn’t immediately rush after her and offer to carry those shopping bags.

Browsing through Chuo University’s new anthology of classical writing on Mt Fuji – as reviewed in the previous post – Project Hyakumeizan was delighted to find a translation of the Heian-era Record of Mt Fuji (Fujisanki). Indeed, this is probably the first full translation of the Record directly from the classical Japanese.

It was in this essay that the scholar and statesman Miyako no Yoshika (834-879) gave the earliest known detailed description of Mt Fuji’s crater – suggesting that, by this time, somebody had actually climbed the mountain. Or at least had sent a drone up there to take a look.

Part of this essay’s charm is that it promiscuously mixes the natural and what we would call the supernatural. On the one hand, there are details that any Fuji climber will recognise: “The mountain is covered in white sand, which easily crumbles, making it nigh impossible for those wishing to ascend its peak to get beyond the base of this mountain.”

On the other hand, we read of a mysterious jewel tumbling down its slopes. And of a mystical apparition on the fifth day of the eleventh month of the seventeenth year of Jōgan (875):

The officials and people were celebrating a festival in accordance with an ancient rite when, as the day wore on towards noon, the sky cleared wonderfully. Looking up towards the mountain, they saw how two beautiful maidens robed in white were dancing above the summit, seemingly a foot or more above it. Several local people saw it; a very old man passed on the tale.

Miyako no Yoshika’s account obviously made an impression on those who came after him. In the same anthology is an excerpt from a diary of a Journey to the Eastern Lands (Tōkan Kikō), completed around 1242. The anonymous fifty-year old traveller gazes up at Mt Fuji from the Bay of Tago and notices that its peak stands out blue against the heavens.

Then he recalls the legend of the maidens dancing on the summit and composes a deft tanka:

Those white clouds drifting in the wind
Over the peak of Mount Fuji
Look like the sleeves of some heavenly maiden.

Alas, we modern mountaineers are too literal-minded. All we see when we look up at the summit are plumes of spindrift blown out by that fearsome Mt Fuji wind. But a browse through this anthology can fix that, by reminding us how the mountain was seen in past centuries.

The Bay of Tago, according to a note under the diary excerpt quoted above, corresponds to the southern parts of present-day Fuji City. I wonder if anybody has ever seen the dancing maidens from there.
Posted by Project Hyakumeizan at 8:40 PM No comments:

“Reading works of literature dealing with Mt Fuji is thus essential for understanding the Japanese spirit.” Prefacing a new anthology about Japan’s top mountain, this statement strikes one as remarkably bold. Yet the claim might almost be justified, so compelling is the collection of classical poetry and prose that it introduces. 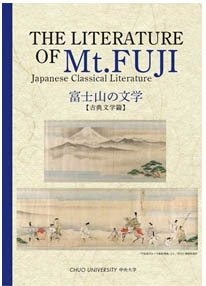 The Literature of Mt Fuji: Japanese Classical Literature is published by Chuo University. Owing to the generosity of the university and whichever government agency sponsored it, the text can be downloaded for free.

An especially big hand here for Columbia University’s Kristopher Lee Reeves and Ngo Vu Nhat Phuong, who did the fairly direct yet fluent English translations. These are presented with the original Japanese texts on facing pages. Thanks, guys!

The collection consists of poems and prose about Mt Fuji from the eighth-century Man’yōshū through to the seventeenth-century haiku poet, Bashō. Selections are arranged chronologically, within three thematic chapters. This helps readers to trace out the ways in which later writers echo and develop the thoughts of their predecessors.

For instance, here is Monk Saigyō’s famous waka, composed while travelling on a pilgrimage to the eastern provinces in about 1186:

Just as smoke drifts on the winds over Mount Fuji
Only to vanish – whither no one knows –
So, too, does my soul wander on

A century later, the widowed Lady Nijō alludes to the same poem when she ponders the vanity of life:

How futile that that all these thoughts should be piled onto one like me who must vanish without a trace. Now, when the smoke atop Mt Fuji can no longer be seen, I wonder what – if anything – could be blown by the wind.


The tone is not everywhere so elevated. We have a Saikaku (1642-1693) character dissing a former wife because she took an upturned bowl for a model of Mt Fuji. There is inept mensuration – “If I were to compare this with the mountains we have in the capital, I would say it is as large as twenty Mount Hiei’s piled atop one another, while its shape is something like one of those little mounds made for drying salt” (Ise Monogatari).

And there is the most shameless flattery, straight from some medieval politburo: “So brilliantly shimmered the peak! One could not help but think the God of Mount Fuji had come to wait upon the majestic presence of our lord, the Shogun” (Procession to Mt Fuji). Indeed, what’s striking about this anthology is the sheer medley of different voices. On this evidence, the Japanese spirit must be uproariously diverse.

Or, as the Hyakumeizan author put it, “Mt Fuji is there for everyone…” You could say the same about this anthology. As the introduction explains, the bilingual presentation was intended “to assist the teaching of works of classical Japanese literature in English”. But the ample and informative notes (again, thanks!) will help both literary scholars and general readers.

For meizanologists, this volume comes along like a proverbial London bus – you wait and wait, and then three roll up together. For years, it seemed, Mt Fuji lacked any English-language write-ups other than a hiking guidebook and some photo collections.

Then, all of a sudden, as if catalysed by the volcano’s accession to world heritage status, along came H Byron Earhart’s magisterial Mount Fuji: Icon of Japan and the Shizuoka-Yamanashi Joint Council’s Mt Fuji: The Wellspring of our Faith and Arts, complete with a foreword by former prime minister, Nakasone Yasuhiro.

And now, as if to complete a triple whammy, here comes this excellent literary anthology. By the way, Chuo University, how about following up with a second collection, to sample the Mt Fuji literature from the eighteenth century to the present? That too would be well worth waiting for.

Posted by Project Hyakumeizan at 4:01 PM No comments: