The rock of discovery

Arnold Lunn on the mountaineer's quest for the unattainable

I have just been reading a tale which comes down to us from the dawn of mountain adventure, a true story which may serve as a parable to interpret our mountain pilgrimage.

Long ago, before the peace of the snow-ways had been troubled, and before the remoter glens had been disturbed, men believed that a magic vale lay hidden among the glaciers of Monte Rosa, a vale where flowers blossomed in winter and where the happy cattle were never driven from their pastures by the snow.

On a Sunday morning in August 1788, an eager company of explorers set out from Gressoney to discover this Happy Valley. They climbed for hour after hour and at last reached the sky-line. The pass where they stood is called to-day the Lysjoch, and the rock where they rested still bears the name they gave it – the Rock of Discovery.

But the Rock was not happily named, for these men of Gressoney did not find what they were seeking. They looked down not on the Happy Valley of their hopes, but on the valley now known as Zermatt, which is no more and no less happy than that from which they came. The Happy Valley had eluded them just as it eludes us to-day.

"The foundation of the true mountaineer's creed," writes Mr Stutfield, “like that of the mystic, is the belief that the essence of life lies in exploration. He has in greater or lesser degree the dim consciousness of the beyond."

The beyond remains dim. We never find the crock of gold. We never set foot in the Happy Valley. Sometimes we seem to tremble on the brink of discovery, but the curtain is never drawn aside from the hidden battlements of Eternity. Those shaken mists a space unsettle and then round the half-glimpsed turrets slowly wash again.

And because the turrets are only half glimpsed, men will climb long after the last mountain has been cairned and charted. For no map will disclose the secret of the Happy Valley, and Beauty and Romance will not wholly perish from the earth so long as our children's children are still haunted by the mystery which baffled the men of Gressoney.

A king among alpinists

Arnold Lunn's memories of a king who led from the front, in war and in peace

Albert I (1875-1934) reigned as King of the Belgians from 1909 to 1934. Throughout the first world war, the King and Queen were more often in than out of the front-line trenches, and were never out of range of enemy guns. A passionate alpinist in his leisure hours, King Albert died while soloing a cliff climb in eastern Belgium in 1934. What follows is from a personal memoir by alpine ski pioneer Arnold Lunn:

"I will not be deprived of my rights as a citizen because I happen to be a King," was a favourite saying of his. As a king, his life was so precious to his country that his advisers made every effort to keep him out of the trenches in war and away from the mountains in peace. But the King refused to be deprived of the right to which, as a citizen of Belgium, he was entitled, the right to imperil his life as and when he pleased.

To the King mountaineering was not mountain travel, but a duel between man and mountain. It is, of course, the determination to preserve the reality of that contest which is responsible for all new developments in mountaineering. The King sought out the climbs which tested him to the limit of his capacity, knowing well that this involved definite risks, since no man can measure himself fully against the mountains without peril.

He climbed a great deal alone among the small but difficult rock peaks which are within easy motoring distance of his villa on Lake Lucerne. He was not at his best on snow and ice, but he was a magnificent rock climber, and it was as an active partner, and not as a passenger, that he achieved a series of brilliant guideless climbs. Two members of the Kandahar Club, Walter Amstutz and Gotlieb Michel were his companions on expeditions of exceptional difficulty. Amstutz has given a list in Die Alpen of the King's climbs in the Dolomites and the Engelhörner and elsewhere. It is a list of which even a modern cragsman might be very proud.

On one occasion, as the King was creeping along an extremely exposed and treacherous traverse, one of his companions showed signs of perturbation. The King looked over his shoulder down into the depths below, and said, "Death is the fate of all true Alpinists," a remark which did little to reassure his companion.

Arnold Lunn, Come what may: an autobiography, Little, Brown and Co, 1941

Obituary for King Albert I in the Alpine Journal, with a list of his climbs (courtesy of the Toyohashi Alpine Club)
Posted by Project Hyakumeizan at 8:55 PM No comments:

Alpinism and the waning of faith

And perhaps the revelation of mountain beauty depends not only on the physical constitution of the mountains but also on the angle of spiritual reflection. There have been long ages when man was badly placed to see the light of timeless beauty shining through the mountain screen, and it is perhaps no accident that this light should have become clearer when a greater light was partially obscured. 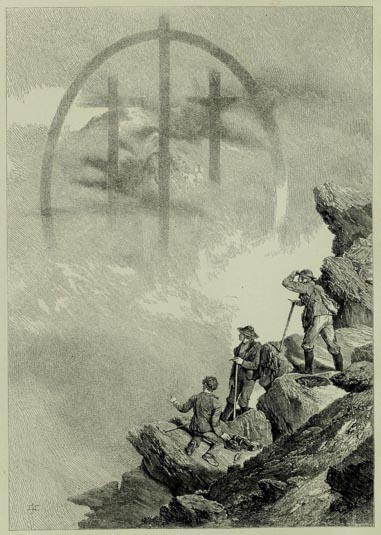 The beginning of mountain mysticism in the eighteenth and of systematic mountaineering in the nineteenth century coincided with defeatist periods in Christian history. It is, as I pointed out in my book, Switzerland and the English, an interesting coincidence that Rousseau, who was, as Leslie Stephen remarked, "the first to set up mountains as objects of human worship," should have completed the Nouvelle Heloise, which had so great an influence on the development of the mountain cult, in the same year, 1759, that Diderot's Encyclopaedia, that manifesto of scepticism, was published, and that exactly one hundred years later the Origin of Species and Peaks, Passes and Glaciers should have made a simultaneous appearance.

It would seem as if both in 1759 and 1859 Providence provided an antidote to complete scepticism. The Alpine Club and Darwinism are in effect contemporary phenomena. They were born together but, fortunately for the Alpine Club, they did not decline together.

Image: Fogbow on the Matterhorn, from Edward Whymper, Scrambles amongst the Alps in the Years 1860-69, published 1873 (via Wikipedia)
Posted by Project Hyakumeizan at 8:32 PM 1 comment: