For what it's worth

A Taishō-era meditation on the meaning and worth of mountaineering 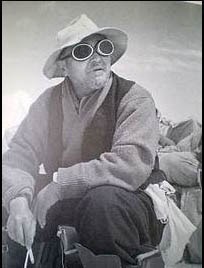 Is it worth it? This is the question that floats to the surface after a mountaineering accident. Following his epoch-making first ascent of the Eiger Mittelegi ridge in September 1921, Maki “Yūkō” Aritsune (1894-1989, picture left) returned to Japan and set about training up a new generation of Japanese alpinists.

At first, all went well. On March 30, 1922, he led a group of young ski-mountaineers to the top of Yari-ga-take. In the summer, he held a technical training camp in Karesawa, in the heart of the Northern Alps.

Then came nemesis: in January 1923 on Tateyama, one of Maki’s companions collapsed and died of exposure in a snowstorm. The victim, Itakura Katsunobu, was one of the most promising and experienced of Japan’s young alpinists. As the son of a former daimyō, he was also a scion of the aristocracy.

Explanations were needed, and responsibility had to be taken. Maki fulfilled both obligations in an essay entitled “On the death of Itakura Katsunobu” (板倉勝宣の死). In the opening passage, he also weighs up the meaning and worth of mountaineering itself:

The evolution from summer to winter mountaineering is a natural one. If we want to get to grips with ice and snow, we have to go to the mountains in winter. In the summer mountains, all that remains to be developed is climbing technique – that is, rock climbing or “klettern”, to use the German word. Now, if we were happy just to follow in the footsteps of our predecessors, there would be no particular problem – we would have no need to seek out any new paths for ourselves.

But if we wish to build on the experience and knowledge of our predecessors and to push out the frontiers, even if only a little way, then we’ll always be seeking out new paths. That said, it’s quite permissible for a mountaineer to have ordinary, humdrum ambitions, as long as these don’t diverge from the true path. In any mountaineering activity worthy of the name, I believe that the people involved derive some value from it.

In this particular case, however, I would deeply regret it if confusion were to be caused by my own failure or by the aspects of mountaineering that can invite misunderstanding. As Sir Francis Younghusband observed, one could look at mountaineering either as an art form or as the youthful spirit of a people finding expression in a sport. Yet, whatever one’s view or interpretation, mountaineering is a complex and multifaceted activity.

As one might surmise from the existence of a word such as “oromania”, mountaineers have an undeniably compulsive disposition, one that couldn’t contemplate a life without mountains to climb. There are the delights they find in exploring the vast and beautiful mountain world of nature. There are the hardships they overcome or the tranquil state of mind they attain as they stand aloof from the world. Each mountaineer finds his own kind of satisfaction.

One thing is constant, though; once you are dealing with the vagaries of mountains and weather, a certain level of risk is unavoidable. Some might say that it’s unwise to expose oneself to danger. I would say, rather, that one should oppose that risk by proceeding with both courage and the maximum degree of caution. To go forward not defensively but with resolve – this is surely the sound and substantial way. 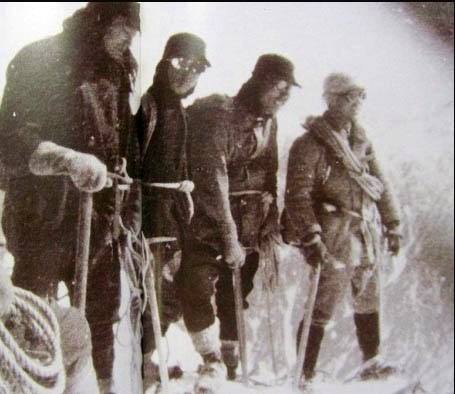 Maki Yūkō, "On the death of Itakura Katsunobu", in selected essays published as "Mountain journeys" (山行).
Posted by Project Hyakumeizan at 1:43 PM No comments:

The Hyakumeizan of relative height

A philosophical attempt to upset the established order

Height above sea-level isn’t everything, I realised while musing on the difficulty of defining a mountain – a topic touched on in the previous post. I mean, if you climb to 4,810 metres in western Europe, you are standing on top of Mt Blanc, with the world laid out at your feet. But the same altitude in Tibet hardly raises you above the level of the dusty plateau.


Fukada Kyūya made a nod towards that resolving that awkwardness in the afterword to his One Hundred Mountains of Japan. A mountain’s height, he suggests, is one thing; its stature quite another. In the end, though, his choice of mountains is purely personal, based mainly on their aesthetic and historical appeal. Thus the Hyakumeizan author neatly sidesteps the philosophical question of what constitutes a mountain.

Others have taken a more rigorous approach to the problem. The other day I happened on a list of one hundred mountains of the world ranked by their “primary factor” or prominence. Prominence here is defined as the minimal vertical drop from the summit one has to descend before one can ascend a higher peak. In effect, it is a measure of how far a mountain stands proud of its surroundings.


In this ranking, Mt Everest is still Top Mountain; indeed, it has to be, by definition, for no higher peak can be ascended. What is interesting about this ranking by prominence is what happens lower down the table. Aconcagua (6962 metres) vaults over the heads of numberless Himalayan peaks into second place. And Mt Blanc, as befits its lordly eminence over the lesser Alps, makes it all the way up into 11th place.

Clearly, it helps to be an “island peak” if you want to make a good showing in this table. As a result, big volcanoes do well – some might say disproportionately so. Even modest Mt Fuji (3776 metres) is promoted to 35th place. For their part, Kilimanjaro (5895 metres) is up there in fourth place, Damavand (5610 metres) in 12th, and Mauna Kea (4205 metres), the roof of the Hawaiian islands, in 15th.

Mention of Mauna Kea made me wonder, though. Isn’t this ranking by prominence just as arbitrary as the traditional ranking of mountains by absolute height above sea level? For, in reality, Mauna Kea rises not from the sea’s surface but from the sea floor, which on average is more than 4,800 metres deep in these parts. So the real Mauna Kea is a structure that rises almost 9,000 metres from its base – higher than Everest.


This doctrine of “real topographical relief” could dangerously subvert the established order. And, in the hands of Koaze Takashi, a professor of geography at Meiji University, it does just that. Measuring from the depths of the nearby Japan Trench, reckons the professor, Mt Fuji rises a breath-taking 12,000 metres above its base. And, he estimates, Everest could only rival that elevation if the sediments in the Ganges Basin were excavated down to the offshore bedrock.

Could it be that, in terms of true planetary topography, Mt Fuji is now the highest mountain in the world?

The Earth: an intimate history, by Richard Fortey, for the maunderings about Mauna Kea.