One-third of Japan’s popular One Hundred Mountains are active volcanoes. This can lead to tragedy. In September 2014, a sudden eruption on a volcano in central Honshū killed 63 people. Some of the victims were never found. To raise awareness of these hazards, Japan’s Home Ministry and its Meteorological Agency have recently issued a leaflet for hikers.


What follows is an outline summary of the Japanese text (PDF). The front sheet of “Be prepared for hiking on volcanoes” (火山への登山のそなえ) marks the location of Japan’s 110 active volcanoes – “active” means showing signs of life, or having erupted within the last 10,000 years. The 33 active volcanoes selected by Fukada Kyūya for his One Hundred Mountains are distinguished in red.

Next are points to keep in mind when climbing a volcano:


In addition to your normal hiking kit, map and compass, you should consider carrying a copy of the local volcanic hazard map, which will show you the range of previous eruptions, and also places to take shelter. A helmet, goggles and a towel will protect against ash and other fall-out, as will a rain-jacket. A headlight will help in bad visibility. And don’t forget a spare battery for your mobile phone and emergency rations/water for yourself.

The last sheet of the leaflet starts with a reminder of the 2014 Ontake disaster. Then (see top graphic) two cartoon volcanoes present the various types of eruptive threat – showers of heavy rocks that can fly up to four kilometres from the vent; smaller stones with a lethal range of 10 kilometres; volcanic ash that may, in the leaflet’s measured language, “affect your breathing”, pyroclastic flows that burn and bury; volcanic gases and mudflows. Each category is illustrated from an eruption in living memory.

The message is clear: these hazards are for real.

Mt Fuji: Journey to the centre of Mt Fuji

Yake-dake: Seasons of a stratovolcano
Posted by Project Hyakumeizan at 6:39 PM 4 comments:

The making of a Meiji mountaineer (5)

Concluded: a translation of Kogure Ritarō's A talk about mountaineering

In this way, the people of a congregation would go on long pilgrimages to their special mountain for a week or more, or even several weeks. Thus, most of the notable mountains had already been climbed, except for those in a small part of what’s now known as the Japan Alps. But if there had been any indomitable monks like those pioneer mountain mystics of old, who tirelessly opened up new mountains and proselytised their faith, I can scarcely imagine that they would have left any mountain untracked. So this is a piece of good luck for us.

The important thing to note is that most of these mountaineers were commoners. While the city-dwelling aristocracy and the literati were celebrating Mt Fuji simply as something to look at, the commoners were climbing mountains all over the place. Of course, the power of faith is part of the explanation, but one can’t help feeling that the vigour of this mass mountaineering movement and that commoners were organising group ascents from quite early times can be put down mainly to the fact that Japan’s mountains are easy to climb in the summer.

These mass ascents meant that there would be thousands or even tens of thousands of climbers, but except on their chosen route, the mountain wasn’t devastated. For example, when we had to relieve ourselves, we dug a hole, did our business on a sheet of paper, and tidied up afterwards; we were always extremely reluctant to desecrate the mountain. Standing on the top of Shirouma, I couldn’t help feeling sad at the way that beautiful sward was being trampled from end to end. As we keep climbing the mountains that our forebears opened for us, in new ways, and pass them on to the next generation, surely we should want to avoid passing them on in a shop-soiled state.

As my mountain-climbing evolved from such circumstances, it’s only natural that I can’t entirely escape my origins. So I wear Japanese garb over my straw sandals and leggings, don a rush mat against the rain, keep an oiled paper cape ready, hang my baggage from panniers, and wear a hat of cypress bark instead of a straw one. I’ve been told by Mr Fujiki that this makes me look like an itinerant swordsman of old, and indeed there could be some similarities, as this was the traditional garb for travelling. Of course, as a pilgrim, I didn’t carry a short sword or a fighting staff, but fortunately I was able to keep climbing mountains in this way up to the end of the Meiji years, without any accidents, and it was only when I first met the new city-dwelling type of climber, never having heard of such a thing, that I realised to my amazement just how many people like climbing mountains. And among those people are the founders and inaugural members of the Japanese Alpine Club.


The downside of traditional mountaineering dress is when a storm hits. As you can’t put up an umbrella, all you can do is wrap it tightly in the straw mat and tough things out. I once got caught in this way while climbing Kaikoma from the Todai valley, and I still remember how we struggled to avoid succumbing to the cold. In those days, we’d stay the night at the summit, so as to enjoy the view of sunrise at leisure on the next day, as we felt safe sleeping on an open summit, even if it was colder, rather than camping in a gloomy wood. As for food, I sometimes walked carrying enough large balls of baked rice for three days, but I doubt if such tribulations can be imagined by anybody who hasn’t experienced them.

Well, I’ve rambled on for long enough with my talk, but if you’ve learned something from it about the way mountain-climbing was in those days, then I will consider myself more than amply rewarded.

This is a beta translation of a chapter (登山談義) from Mountain Memories (山の憶い出), as republished by Heibonsha in 1999 and edited by Ohmori Hisao. Kogure Ritarō (1873-1944) grew up in a mountain village where people still made regular pilgrimages to Mt Fuji and Ontake. He made his way via the new Meiji educational system to Tokyo, where he joined the Japanese Alpine Club a few years after it was founded, and later became its president. For more about the celebrated mountain meeting at Kirigamine in August 1935, see the introduction to One Hundred Mountains of Japan.
Posted by Project Hyakumeizan at 10:08 AM No comments: 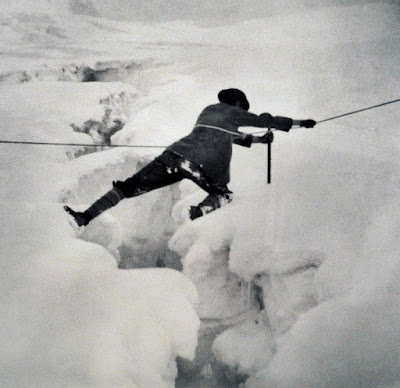 Image: "Pollinger breaks through", photo by Edward Whymper, from Whymper’s Scrambles with a Camera, edited by Peter Berg, former Hon. Archivist of the Alpine Club

Ink: Poem by I A Richards, the literary critic and alpinist, to his wife, Dorothy Pilley

Recall the Epicoun:
Night, welling up so soon,
Near sank us in soft snow.
At the stiff-frozen dawn,
When Time had ceased to flow,
- The glacier ledge our unmade bed -
I hear you through your yawn:
"Leaping crevasses in the dark,
That's how to live!" you said.
No room in that to hedge:
A razor's edge of a remark

Posted by Project Hyakumeizan at 9:10 PM No comments: 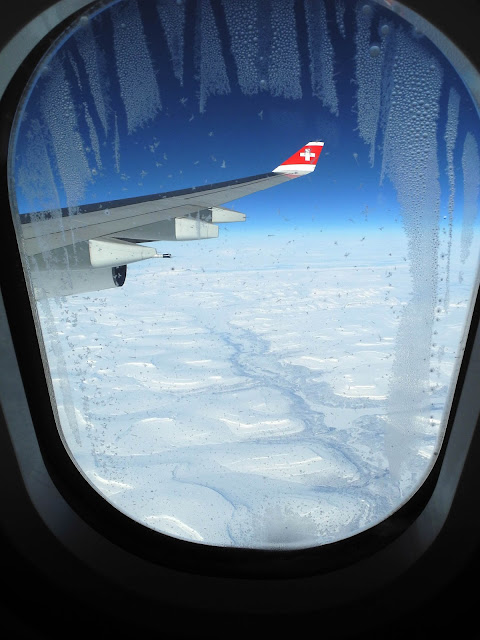 19 April: Narita again: after circling back over the airport, the Airbus heads due north, tracking up the spine of Tohoku. 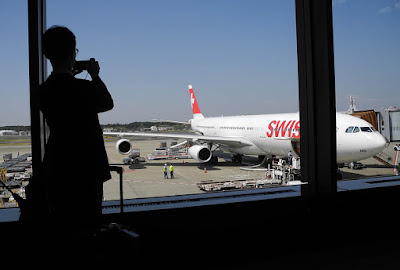 Looking through gaps in the cloud, passengers in the right-hand seat rows can play Meizan sudoku. 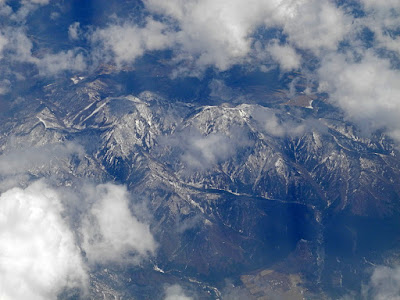 Over Hokkaido, the track turns slightly left, so that we coast into Siberia far to the north of Vladivostok. At first the big Siberian rivers roll brown with meltwater; after lunch, washed down with a glass of economy-class pinot noir, they’re frozen into silent braids. 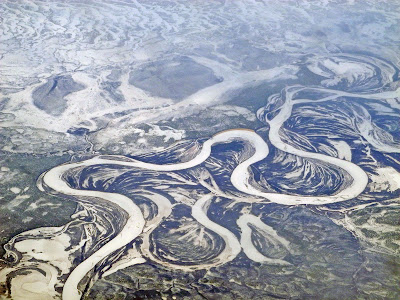 We continue on this hyperborean heading, overflying nameless mountains, until Siberia’s northern coast heaves into view under the starboard wing, somewhere north-west of Norilsk. 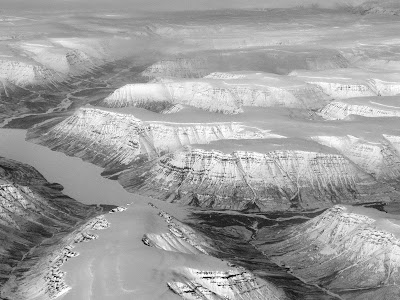 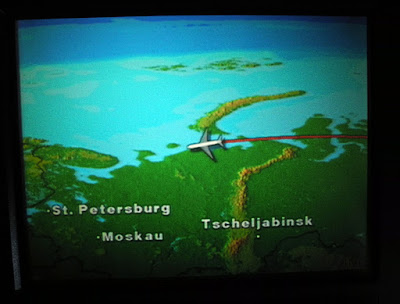 The Barents Sea winks blue at this season; the water is open as far north as the eye can see. In just one place, though, ice-floes have crowded up on a lee shore. 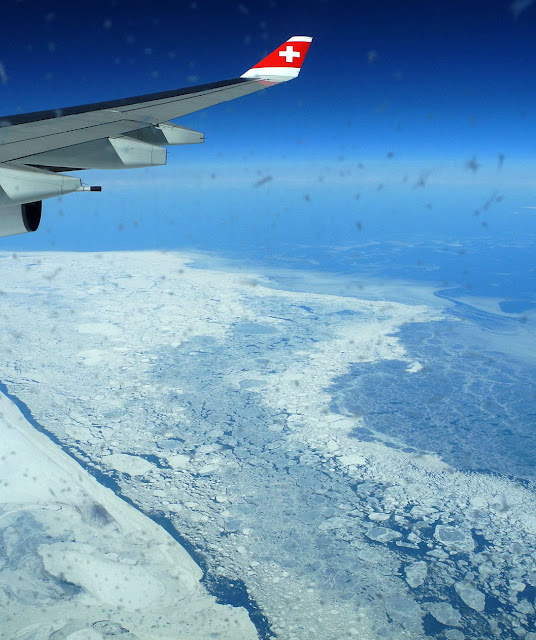 Perhaps it's the pinot noir. Looking down on the brash ice, I so far forget myself as to think of ... white petals floating in an old castle moat. How mortifying: even at this distance, the cherry flowers have cast their spell. As they always will. 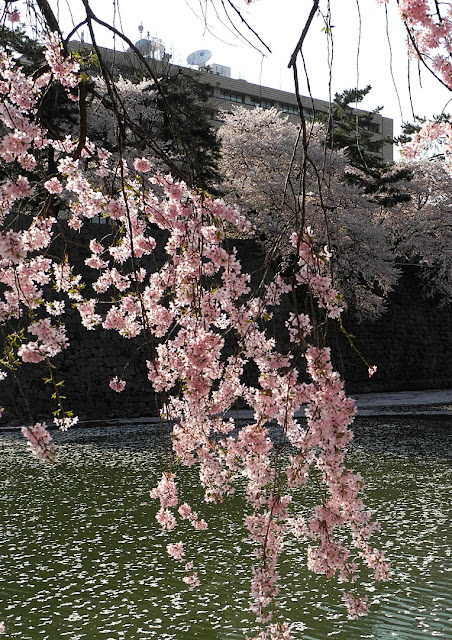 Posted by Project Hyakumeizan at 6:50 PM No comments: