Travelogue continued: visiting the Island of the Immortals at a Great Mountain Temple near Kobe

23 November: Once you’re on a Hyakumeizan trip, everything becomes a mountain. By coincidence, the Senpai had chosen to visit a temple called the Taisan-ji – the Great Mountain Temple. When we arrived there, though – by now it was mid-morning – there was nothing obviously mountainous about it except the forested hill it sits in. 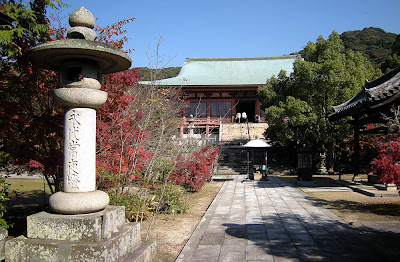 Taisan-ji belongs to the Tendai sect. In feudal times, Tendai Buddhism was for the Emperor, Shingon for the nobles, Zen for the warriors, and Jodo for the people. Today, in the bright autumn light, Daisanji was there for everybody. 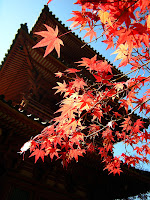 Babies rode slumped on their mothers’ backs and children scampered, indifferent to the flaring colours of the maple trees. Photographers photographed. Appreciation for autumn hues increases with age. A very old man was helped down, step by painstaking step, from the gallery of the main hall. 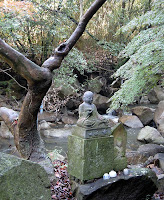 We walked across an ornamental bridge into a glade. The shii trees that roof it, as well as the ilex, camellias and evergreen oaks, are said to be a remnant patch of the forest that once stretched in a verdant band all along this coast. By the stream, a stone Buddha seemed to distil green thoughts in a green shade. 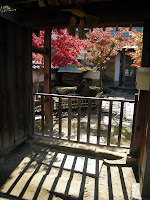 On the way out, we noticed a side-temple, the Anyo-in. We shuffled off our shoes and went in.

Hidden from the outer world was a small stone garden, densely planted with curiously shaped rocks. One of them, explained a leaflet, represented the island peak of Horai-san. 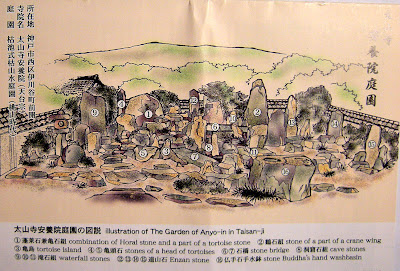 We’d found our mountain for the day. I read on:

The concept of this garden came from Horai-Shinsen Thought brought from China, which was the fundamental thought in the long history of traditional Japanese gardens. Horai-Shinsen Thought came from the following legend. It was believed that there were mystic islands including Horai Island far away in the sea, and mountain hermits (Shinsen) who had hidden treasures and a secret formula for everlasting youth and immortal lived there. That was considered the highest idea to reach the Shinsen world of Horai-Shinsen Thought… 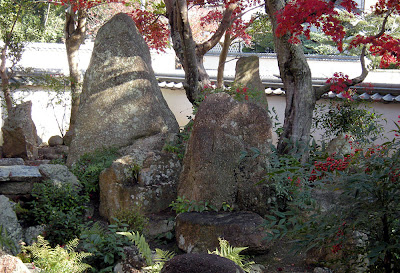 I took out my camera to record the garden, even though the leaflet subtly admonishes such behaviour: Please enjoy this garden, it said, sitting down on the floor and looking at the beauty of this garden with changes by four seasons. You can enjoy not only this garden itself but also profound meanings and thoughts behind it. No, you can’t capture an image of Horai-san any more than you can climb it. Like Mount Analogue, the island peak is inaccessible. That is why, in a garden, it is never joined to other rocks with a bridge. You might, if you are lucky, reach the Shinsen world of Horai-Shinsen Thought, but never Horai-san itself.

Some have differed on that point. In his book Kwaidan, Lafcadio Hearn (1850-1904) claims to have visited Horai-san. It is a place where the people drink wine from “very small cups”, he reports, and leave their houses unlocked, because there is no need to do otherwise. They are not immortal, however, and the essay ends with a warning: “Evil winds from the West are blowing over Horai; and the magical atmosphere, alas! is shrinking away before them. It lingers now in patches only, and bands – like those long bright bands of cloud that trail across the landscapes of Japanese painters.”

I thought about those patches and bands of Horai-san as we walked back to the van. Just how would you program your GPS if you wanted to find them today? Maybe the Senpai would know. Then, without asking, I understood why he’d chosen to visit Taisanji on a fine autumn day. 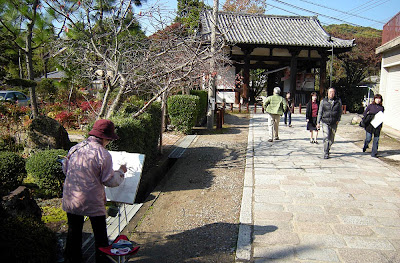 Travelogue continued: I pay a social visit to the Senpai, but we lose our way and discover a floating island. It isn’t Horai-san, though.

23 November: Trusting that the wind and currents would bring them to the floating island of the Immortals, they set themselves adrift in boats without oars or rudders. Those monks of the Ta’ng era came to mind after we’d launched ourselves, in the Sempai's van, into the tangled ocean of Hanshin expressway system. 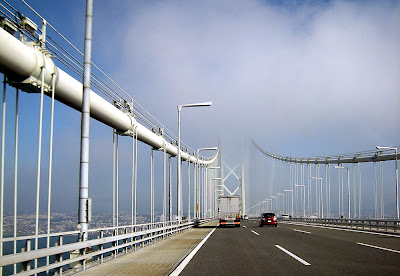 Not that we were seeking a floating island, of course. No, the Senpai and I gave up our overseas expeditions some while back. (Probably to the relief of the Senpai’s wife.) These days, we just visit the odd garden or temple, like the one we were now heading for. But now, like those monks, we were, as the navigational manuals might put it, “uncertain of our position”. Worse still, we’d left home without a proper road-map, let alone GPS.

While the Senpai exited the expressway, turned the van round, and headed towards yet another on-ramp, I frantically consulted the large-scale map of Japan that I’d just found in a door pocket. Surely, I muttered, we are still on Honshu. Then, suddenly, we were no longer on Honshu; the van climbed a ramp and headed out between two mighty pillars. The sea glittered below.

“Well, I wanted to show you this anyway,” said the Senpai, quite unfazed. There was a touch of pride in his tone, and justifiably so. The Akashi Straits Bridge is an impressive sight, especially when the tops of its piers lose themselves in the morning mist. We rolled slowly towards mid-span as the Senpai explained how the half-built bridge gained a whole metre in length during the Kobe Earthquake fifteen years ago. 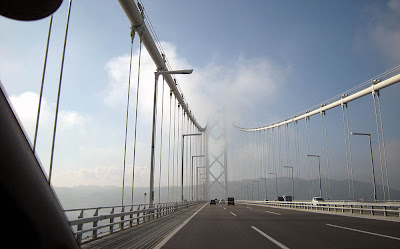 I later found an article that explained in detail what happened here within a few seconds after 5.46am on January 17, 1995. The bridge did, indeed, gain just over one metre in total span. The bridge deck, not yet hoisted into place, had to be lengthened to compensate. All this happened because the island of Awaji (or that part of it on which the bridge stands) had shifted 1.4 metres westward relative to the mainland.

We had found our floating island.

Driving a few yards onto Awaji, we turned the van more or less directly above the spot, 16 kilometres down, where the earth tore apart on that day of wrath. Then we drove back across the bridge, the tide-race below patterned into slow-churning whirlpools.
Posted by Project Hyakumeizan at 9:32 PM 2 comments:

Travelogue continued: Taking in three views of Mt Fuji on the way back to Tokyo

November 21/22: “Fuji is there for everybody,” writes Fukada Kyuya in One Hundred Mountains of Japan (Nihon Hyakumeizan). And so it is. On this holiday weekend, the Shinkansen was full and the only remaining seat was on the seaward, non-Fuji side. 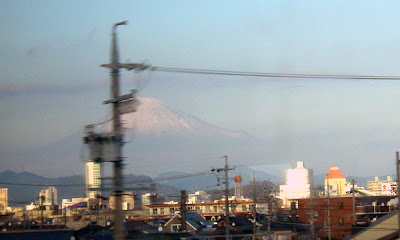 Thus it was gratifying to discover that – at just one place on the Tokaido line – Fuji shows itself even to passengers sitting on the wrong side of the train. This is just before Shizuoka station, approaching from the west. So we had our first view. 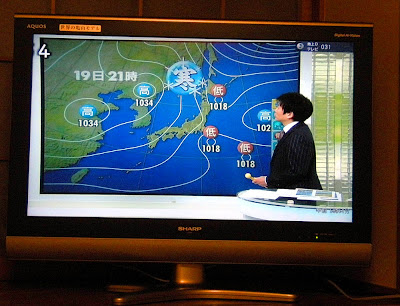 I was on my way to Shimizu to drop in on friends at a conference. The port city is famed for its prospect of Mt Fuji. Unfortunately, the forecast warned of so-so weather, suggesting that we might have to settle for fewer than the thirty-six views depicted by Hokusai. 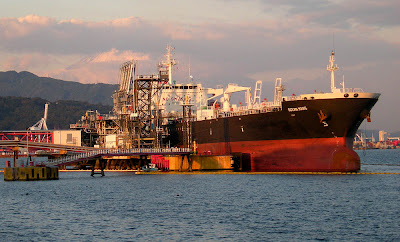 In the evening, there was a brief glimpse of the volcano rising numinously beyond a liquid natural gas ship. We presumed that LNG regasification terminals must be one of those Seven Industrial Plants of Autumn - a fitting (modern) seasonal foreground for Japan's most symbolic mountain. Anyway, we were grateful for our second view.

Next day, a pall of cloud overspread the bay. We visited the famous pine grove of Miho Matsubara. This is where an angel drops from heaven – surely on a warmer day – in the Noh play of Hagoromo, leaving her feathered robe hanging on a convenient pine branch while she bathes. A local fisherman finds the robe and makes as if to keep it. Without a feathered robe, a Japanese angel cannot return to heaven. At first, the fisherman ignores the angel’s pleas but, when she appeals to his finer feelings, he restores the robe, letting the angel soar away “Over the mountain of Ashitaka, the high peak of Fuji.”

The mountain is mentioned only once in the play, yet it appears in almost every wood-cut or painting that illustrates the piece. In an oil painting exhibited in 1890, Honda Kinkichiro (1850-1921) shows Mt Fuji receding below the angel as she deploys a pair of Western-style feathered wings in addition to her feathered robe. Late Meiji was a time of rapid modernisation, even for angels.

We walked on to the end of the sandspit, where a short airstrip points out to sea. A bronze statue commemorates the youths who, in 1944, joined a squadron straight from high school. The inscription on the monument is difficult to read: a signboard beside it elucidates: “the young pilots …never doubting of their country’s cause … endured bitter trials within the sight of Mt Fuji, the sacred summit …”

Nearby, a revetment sheltered a Cessna and a V-tailed Beechcraft, their wing-tips twitching in the big wind. Out across the bay, Fuji was inferred rather than seen; a blue rift in the grey ceiling showed where its summit was shredding the clouds. 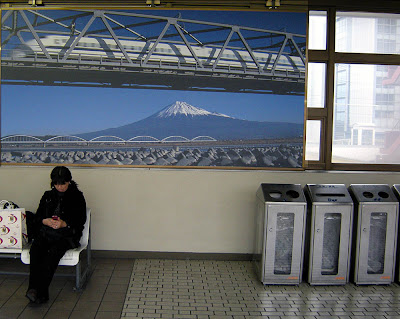 Back at the station, we said our farewells. Today, it seemed, we would have to leave without another view of Fuji. But, no, just before the train arrived, the familiar cone appeared, its phantom outline hovering in the gap between two buildings. 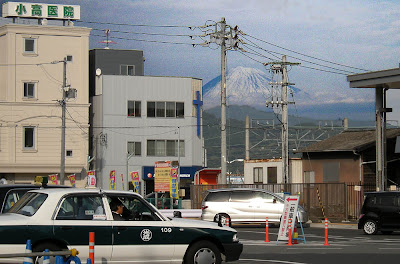 Even – or perhaps especially – in this unpromising setting, the mountain seemed to soar, as far removed from the earth and its troubles as an angel in a Noh play. What was it that Fukada had said? “Fuji is there for everyone and yet, soaring into eternity, stands for something beyond any man's grasp.”
Posted by Project Hyakumeizan at 9:32 PM 4 comments: