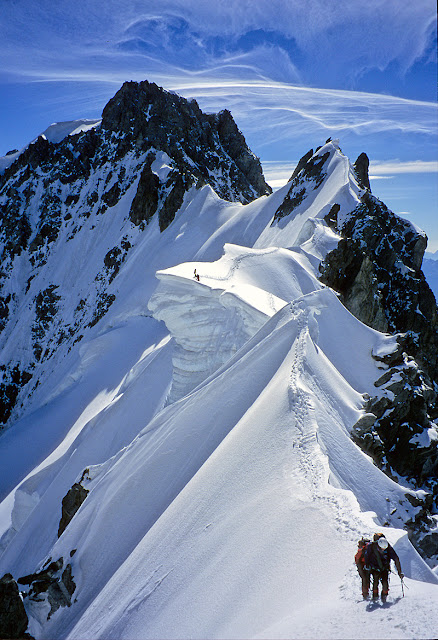 Image: Excursionists on the Rochefort Arete (Photo courtesy of Alpine Light & Structure).
Ink: From Mountains with a Difference (1951), by Geoffrey Winthrop Young.

Most mountains have personality. Some of course, like some acquaintances, are forgotten as soon as we have parted from them. But a number I found to possess an individual character, which became the more pronounced and the more attractive, the more often I visited them. These mountains became in all seriousness, friends. I hailed them from afar each year with the glow which greets old friends returning, and every fresh contact discovered new aspects in a well-loved personality. I was happy just to be upon them, to talk with them wordlessly as I climbed through the intimate silence we share only with a friend. If I slept out under their shadow, it was with the confidence we feel at home, where all the outer universe of stars and darkness looks in upon our security with kindness.

The Apennines, I noticed when I lived among them, had this human personality for the artists of the Renaissance. The circle of Florentine hills framed sympathetically, for them, a small domesticated universe, in which all the hierarchy of heaven floated in the most companionable of immortalities. My universe was perhaps a little larger; but the bigger mountains surrounding it had with me the same personal relationship. They were the guardian pillars set about a like kindly earth; and if not within them as at Florence, yet among them and beyond them there lay for me more than a little of the divine. So it may be said that to the Weisshorn or to the Grepon I could return as to a paradise regained. There was no time and no freedom left me, after the war years, to make new mountain friends; there was too little even to revisit all the best of the old.

Once one of them revisited me on its own account, an unusual experience. It was in the invalid years after the war, and I was working in Geneva with Henry Nevinson, most chivalrous of writers and of war colleagues. He had taken me to dine at one of his secret high places, where the view and the food were both, he declared, incomparable. The view at the moment was covered with evening mists; so we sat outside and talked of the mountains, one of his lifelong enthusiasms. I was thinking, as we spoke, how far the great Alps were now removed from me by my handicap; and I looked across, and saw that the view had cleared over all the mountain ranges beyond the Lake, as far as Mont Blanc.

And then, unbelievably clear and near, a great mountain came out of the brightening sky towards us, every feature of glacier and buttress thrown into salience by the level western sunlight now falling upon it. By every map measurement it was whole leagues away, where I had last left it at the far end of the Mer de Glace. And yet, it was undoubtedly the Grandes Jorasses, a very old friend; and the shoulder which it was conspicuously thrusting forward into my sight was the castle on the summit-ridge to which, since I had seen it, my own name had been given. Nevinson shared to the full in the pleasure of the surprise; and indeed the astonishing nearness and brilliance of the mountain's approach had something of the friendly shock with which we see a familiar face smiling at us out of a crowd of strangers in a foreign land.
Posted by Project Hyakumeizan at 7:16 PM No comments:

From dearth to diversity

International blogs about Japan’s mountains come roaring back
A while back, we riffed on the sudden dearth of Japan mountain blogs – at least, in English. Their number seemed to be dwindling by the day. Worse, some commentators were doubting whether blogs would survive at all, as folk ditched them for tweets and other forms of insta-gratification.


So it’s good to see that, over in Tokyo, Bre’er David has kicked these doubts definitively into touch. On his Ridgelines blog, he recently highlighted no fewer than sixteen Japan mountain blogs (kindly including this one), all in English.

Moreover, this blogoverse seems more diverse than ever: three are written by women, and on a rough count, the authors seem to come from at least five or six different countries.

But maybe we should make that seventeen blogs. We recently happened across Meizan Memories, a well-organised and illustrated blog recording trips to many of the Hyakumeizan or the 200- and 300-summit listings.

Written by Tokyo-based Ben Hentschel mainly in his native German, but sometimes in English, Meizan Memories is a resource for practitioners. If you want to see what your chosen mountain will look when you get there, and how best to approach it, this blog should help.
Wilkommen an bord, Ben.
Posted by Project Hyakumeizan at 8:29 PM 1 comment: