One Hundred Mountains: coming soon, but not quite as soon as expected 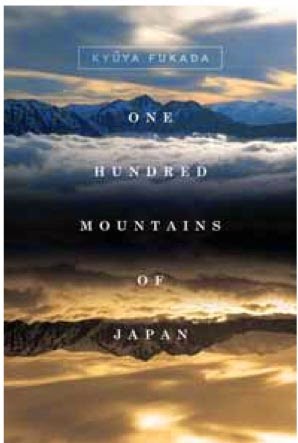 Sumimasen: I have to apologise. In an earlier update, you were promised the English translation of Nihon Hyakumeizan by Christmas. Well, it now appears that you will have it in good time for Christmas 2015. The printing presses are running as I write, which will let us claim - just about - that One Hundred Mountains of Japan came out in time to mark the half-century of the original book's appearance. Alas, copies will reach the shops, online and otherwise, only in the New Year. Zuibun o-matase shimashita.

It occurs to me that several readers of this blog have actually climbed all of Fukada Kyūya's hundred mountains - with all the costs, travelling and placating of office bosses that this entails - in far less time than it took to translate the book's 460-odd pages, let alone get it published. For the record, Project Hyakumeizan started the translation in 2003 and finished it three years later. Yet, as you see, more than twice that much time again was needed to actually get the book out of the door.

Just for fun, I was tempted to see how this tardy-gaited performance stacks up against the Paris-Dakar rally of Japanese-to-English translation - the challenge of turning Genji Monogatari into English. Actually, it might have been better not to venture on that comparison. For it doesn't show Project Hyakumeizan in a good light. Summoning the shade of the immortal Arthur Waley (1889-1966) to the witness stand, we find that he took a mere twelve years for his "transcreation", as he called it, starting in 1921 and completing the last of six volumes in 1933.

Picking up the baton two generations later, Edward Seidensticker (1921-2007) pared that time down to a round decade, bringing out his modernized Shining Prince in 1976. Another few years were knocked off this record by Royall Tyler (born 1936) with his acclaimed 2001 version of Genji, started in 1993. Of course, the Tale of Genji has been translated into many more languages than English. It seems that Setouchi Jakucho, a Kyoto-based nun, took just four years to finish her recension of Lady Murasaki's tale into modern Japanese. And she started at the age of seventy.

Confronted with such examples of translation dash and derring-do, I can only bow at the acutest of angles - please feel free to imagine me tilting ritually forward at the podium like some disgraced company executive - and offer you my most abject moshiwake gozaimasen. So please bear with me until January, and in the meantime have yourself a memorable (but, perforce, One Hundred Mountains-free) Christmas and New Year ...
Posted by Project Hyakumeizan at 6:17 PM 4 comments: 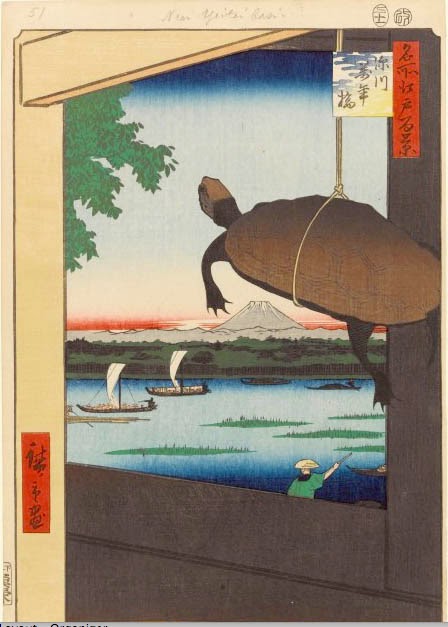 Ink: Dazai Osamu on the appearance of Mt Fuji, from "One Hundred Views of Mt Fuji" (1939):

The appearance of Mt Fuji as one sees it from an apartment in Tokyo has little to recommend it. In winter, there's a good view of the mountain, this little white triangle sitting on the horizon, that's it there. Not a big deal, just a kind of Christmas cake. Careening perilously to the left, it looks like a stricken warship that's starting to slip, stern-first, beneath the waves.

One winter, three years ago, somebody brought home to me an ugly truth - something I found quite unthinkable. Completely distraught, that night, in my apartment, I sat alone putting away glass after glass. I just drank; I didn't get a wink of sleep that night. At daybreak, I went to the bathroom and there, through the grille over the window, I caught sight of Mt Fuji, small, pallid, and heeled over somewhat to the left. I'll never forget this view of Fuji.

Outside, I heard a bicycle rush by on the asphalt street - it was the fishmonger and I heard him say to himself, with a shiver, that Fuji was clear this morning because of the cold. As for me, I was inside in the dark, running my hand over the window, and crying my eyes out. I hope never again to experience anything like this.

Posted by Project Hyakumeizan at 7:28 PM No comments: 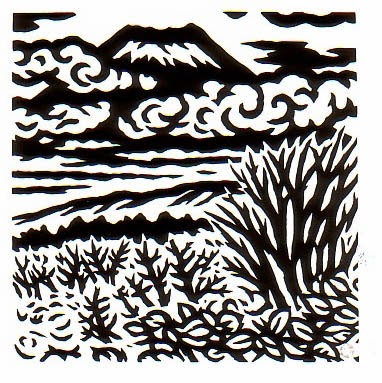 Ink: Dazai Osamu on the apparent height of Mt Fuji, from "One Hundred Views of Mt Fuji" (1939):

"Fujiyama, the glory of Japan": if foreigners find it "wonderful", this is because we've told them so a thousand times, so that Mt Fuji as become a sort of dream vision for them. But suppose you first caught sight of the mountain without first being subjected to all the hype - naively, in all innocence, mind like a blank sheet, as it were, what would you make of it then? Nothing would be for sure. It's a rather small mountain, after all. Yes, small in comparison with its base. Given the length of its base, Mt Fuji should be one and a half times as high.

Only once has the mountain looked high to me, and that was when I saw it from the Jikkoku pass. That was a memorable day. The summit being smothered in clouds, I traced the lines described by the lower slopes and made a guess at where exactly they would meet above. Then the clouds parted and I realised how wrong I'd been. There was the summit, with its blue-shaded tints, at least twice as high as I'd imagined it. But rather than surprise, I felt a sort of frisson and burst out laughing. "Well, Fuji had me there," I thought.

Posted by Project Hyakumeizan at 7:55 PM No comments: 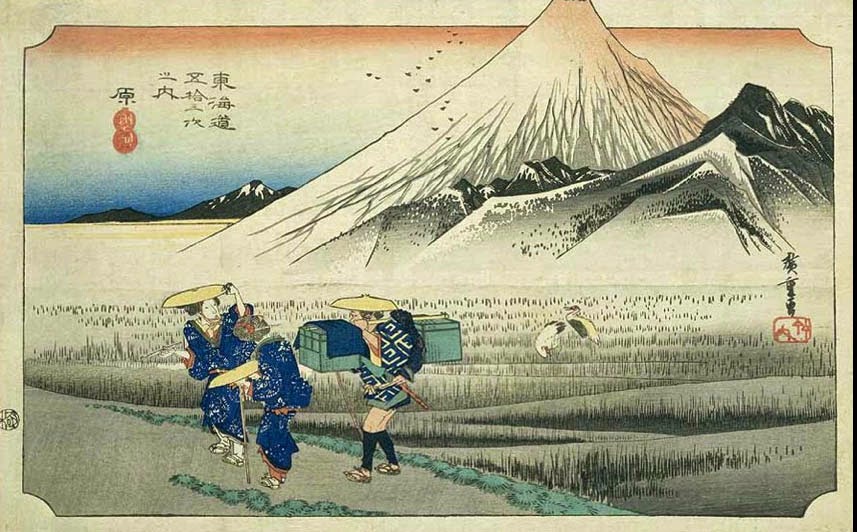 The slopes of Mt Fuji converge at an angle of eighty-five degrees in the prints of Hiroshige, and at eighty-four degrees in those of Bunchō. Yet a glance at the Army General Staff map is enough to establish that the east-west slopes, in fact, come together at an angle of one hundred and twenty-four degrees. For the north-south slopes, the angle is one hundred and seventeen degrees.

Not that Hiroshige and Bunchō are doing anything very extraordinary; in almost any artistic representation of Mt Fuji, the angle formed by its slopes is shown as very acute, transforming the summit into something slender, aery and insubstantial. Hokusai indeed narrows that angle down to thirty degrees, creating a veritable Eiffel Tower.

In reality, though, Mt Fuji forms a rather obtuse angle; it is a mountain of gentle slopes. With those flanks of one hundred and twenty-four degrees in one direction and of one hundred and seventeen degrees in the other, there is nothing particularly lofty or spectacular about this mountain.

It seems to me that, were I in India or some other faraway country, and an eagle took me up in his talons and dropped me off on the coast of Japan somewhere near Numazu, the appearance of this mountain wouldn't in the slightest degree impress me.


More about the angles of Mt Fuji on this blog: Behind the curve
Posted by Project Hyakumeizan at 7:06 PM No comments: