“Mountains that women can climb by themselves”

Last Sunday, Monica Jackson’s obituary appeared in the Guardian. She passed away recently, after an energetic 99 years of mountaineering, scholarship and family life.

In 1955, Jackson set off on what is often said to be the first all-woman expedition to a Himalayan peak.* With two other Scottish climbers, Evelyn Camrass (later McNicol) and Betty Stark, she made the first ascent of Gyalgen (6,151m), a mountain in Nepal’s Jugal Himal region. And they also dubbed one of its neighbours the Big White Peak.

Their choice of name may have been fateful.


Known today as Loengpo Gang (7,083m), this was the mountain that the Japanese author Fukada Kyūya set his heart on a few years later. As Fukada was already somewhat of an expert on the Himalaya, having published two books on them, it is likely that he based his choice on reports of the Gyalgen ascent.

In fact, when planning his own expedition, Fukada wrote to a contact in Nepal to see if he could sign up the Scottish trio’s sirdar, Mingma Gyalgen (for whom they named their peak). Alas, it was not possible to track the Sherpa down.


With three companions, Fukada took ship for Calcutta in the spring of 1958, arriving in Kathmandu some forty-five days after leaving Kobe. With Fukada at the head of fifty porters, an experience that made him feel like Napoleon, the expedition then marched to its base camp in the Jugal Himal. Their intended mountain turned out to be a wildly ambitious goal. Three high camps would be necessary to reach the summit, the party judged. 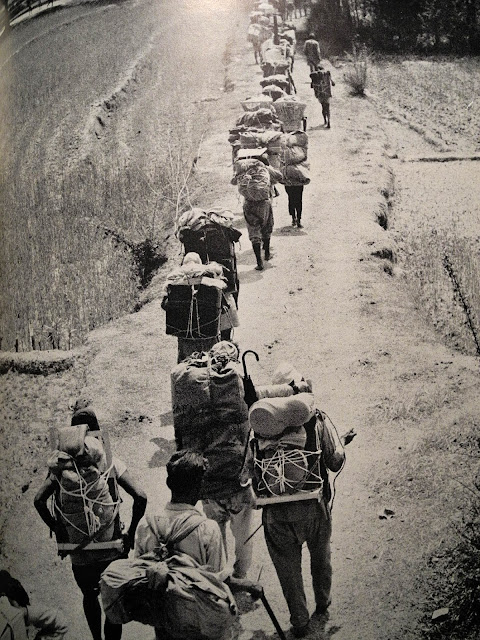 The comforts of Camp Three were scant. By the time it was established at 5,000 meters, the climbers’ lack of high-altitude experience was starting to tell. Age may have had something to do with it too; as Fukada had put it to a journalist just before leaving Japan, he was "only" 54 years old. Just to clamber in and out of the high-altitude tent's round hatch during a blizzard was a torment that had to be repeated several times a night.


Kazami Takehide, the expedition’s photographer, did manage to reach the east ridge by taking turns to break trail with a Sherpa companion. There the brown plains of Tibet were glimpsed through the clouds.

Honour satisfied, Fukada decided to abandon the peak, impressing one colleague with his Buddhist spirit of self-abnegation. The party then moved on to the Langtang Himalaya and, after two months under canvas, back to Kathmandu, and so home. 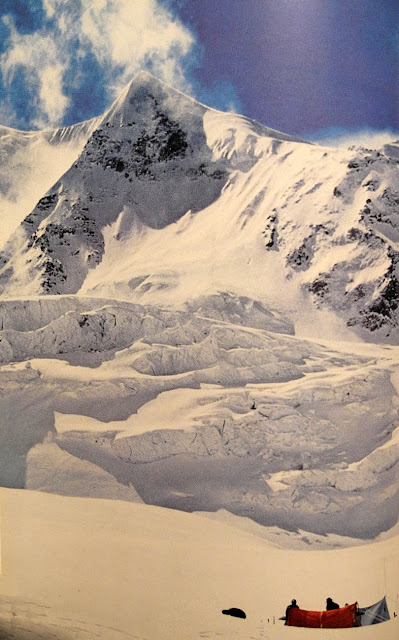 Could it be that the Big White Peak’s name swayed Fukada’s judgment, leading him to pick an objective beyond the party’s capabilities? It’s a tempting hypothesis, given that he’d grown up within sight of Hakusan (2,702m), Japan’s very own “white mountain”.

Be this as it may, the expedition proved far from unrewarding, even without a first ascent. First, travelling through Nepal seems to have sharpened Fukada’s appreciation of his own landscapes. Thus, soon after returning to Tokyo, he revived the idea of writing about a hundred eminent Japanese peaks. A young magazine editor got wind of his thinking and urged him to go ahead. And the rest, as they say, is history.

Secondly, the expedition cemented Fukada’s reputation as a Himalayan guru. After all, he was now an expeditionary practitioner, rather than just a purveyor of book-learning. Young climbers made their way to his house in Setagaya to ask his advice. Indeed, if you are lucky, you can still meet some of them today.

One such supplicant was a slightly built but intense young woman, who introduced herself as a member of the Ladies' Climbing Club. Could Fukada help them find a suitable objective for their first Himalayan expedition? “Hmm,” mused the writer as he pored over maps and photos with his guest, “Are there any mountains that women can climb by themselves?”

Apparently there were. In 1970, Tabei Junko and Hirakawa Hiroko made the second ascent of Annapurna III, reaching the 7,555-metre summit by a new route. Five years later, Tabei headed for Everest on an all-woman expedition sponsored by Nihon Television and the Yomiuri newspaper. Again, the rest is history.

So could it be that Monica Jackson made another signal contribution to world alpinism? By naming the Big White Peak, she may have drawn Fukada Kyūya’s attention to the Jugal Himal. Indirectly at least, the ensuing expedition helped to launch the career of Japan’s most famous lady climber. And, as a bonus, it fomented the writing of Japan’s most famous mountain book.

*although this seems to short-weight Hosokawa Satoko, who led a successful expedition to Deo Tibba (6,001m) in the Punjab Himalaya, also in 1955.

The anecdote about Fukada helping Tabei Junko choose a Himalayan mountain to climb comes from an article on Everest climbers, Everest Shomei Futatsu, by Fujishima Koji in the Asahi Shinbun, November 15, 2005 (thanks to the Sensei for this).
Posted by Project Hyakumeizan at 7:46 PM No comments:

Re-reading a masterpiece of lockdown literature

When you think about it, you could spend months in self-isolation – let’s hope it won’t come to that – just reading the literature of lockdown. Many are the classics written in prison – The Consolation of Philosophy, Don Quixote – or about prison (too many Russian novels to list). Among mountain masterpieces too, more than one has been penned, as it were, behind the barbed wire.

But when it comes to the literature of extreme lockdown, then Richard E Byrd’s Alone is hard to beat.  For this is a book that shows you just how much worse things could get. Commander Byrd, as he was then, spent most of an Antarctic winter buried in the snowdrifts of the Ross Ice Shelf. Solitary in his one-man hut, he was the most southerly human on the planet for almost five months in 1934.

Ostensibly, he was there to make weather and auroral observations. Byrd also admits to some personal motivations: “time to catch up, to study and think and listen to the phonograph”. Then he adds that “perhaps, the desire was also in my mind to try a more rigorous existence than any I had known”.

Always, one should be careful what one wishes for. During his stay, Byrd trapped himself outside the hut in a blizzard, fell into a crevasse and absent-mindedly lost his way on the trackless icecap. Yet these incidents paled beside the main hazard – the oil fumes from his stove that slowly started to kill him. In the end, a rescue party came out from the main base, driving their snow tractors more than a hundred miles through the dark. They arrived just in time.

Self-isolationists have much to learn from Commander Byrd. Obviously, they will keep their stoves and flue pipes in good order. They will stick to a schedule: “From the beginning, I had recognized that an orderly, harmonious routine was the only lasting defence against my special circumstances … I tried to keep my days crowded; and yet, at the same time, I … endeavoured to be systematic.”

And they should read good books at meals. Byrd’s library verged on the highbrow, including Somerset Maugham’s Of Human Bondage, Santayana’s Soliloquies in England, Yule’s Travels of Marco Polo, Veblen’s Theory of the Leisure Class, and Héloïse and Abelard, “a story I have always loved”. But he lays aside Ben Ames Williams’s All the Brothers Were Valiant, although this may have been due to the carbon monoxide poisoning.

Self-isolationists will certainly bring a good music collection. And they will appreciate their surroundings, however forbidding these may be. They may even combine these diversions. Here is the Commander taking the air on a midwinter night, while playing Beethoven’s Fifth on his “Victrola”:

Presently I began to have the illusion that what I was seeing was also what I was hearing, so perfectly did the music seem to blend with what was happening in the sky. As the notes swelled, the dull aurora on the horizon pulsed and quickened and draped itself into arches and fanning beams which reached across the sky until at my zenith the display attained its crescendo. The music and the night became one; and I told myself that all beauty was akin and sprang from the same substance. I recalled a gallant, unselfish act that was of the same essence as the music and the aurora.

To write well, they say, you first have to read well. On the evidence of his library, Commander Byrd certainly aimed high in his writing. At least in this book. For, strange to say, the other title by which he is remembered today falls short of what one might expect from the author of Alone.

On the face of it, Skyward, an account of Byrd's flying adventures, draws on much more swashbuckling material than a solitary Antarctic sojourn. Yet the treatment is somehow perfunctory. Perhaps the book was written in haste. Or was there another reason for this sketchiness? The author may have faked the flight that made his name, turning back well short of the North Pole - this alone would be a good reason to avoid possibly self-incriminating detail.

In the end, Richard Byrd remains an enigma of an explorer - an aviation pioneer who, by his own account, was none too fond of flying. Yet his expeditions to Antarctica were the real thing. They put the continent back on the map, after decades of neglect. And, during his stay at the Bolling Advance Base Camp, he not only survived an Antarctic winter solo - to this day a rare, possibly unique feat - but bequeathed to us a classic of lockdown literature.