Was the mountaineering missionary really the “father of the Japan Alps”? 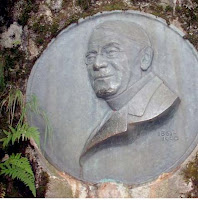 Awarded Japan’s Order of the Sacred Treasures (fourth class) in his lifetime and now commemorated by an annual festival and a bronze plaque at Kamikochi, Walter Weston (1860-1940) looms large over the history of Japanese mountaineering.

The peak-bagging English missionary also figures prominently in Nihon Hyakumeizan, where he appears in the Shirouma-dake, Yarigatake, Hodaka, Jōnen-dake, Ena-san, Hō'ō-zan and Sobo-san chapters. In Japan's most famous mountain book, he is twice described as "father of the Japan Alps".

Now fellow blogger CJW raises a subversive question. “It seems rather unfair that Walter Weston casts such a long shadow over the history of early Japanese climbing when one reads accounts such as Banryu's,” he writes, referring to the monk who climbed Yarigatake, a peak in Japan’s Northern Alps, more than half a century before the English cleric made the ascent. Could it indeed be that Weston has taken more of his share of the limelight?

The debunking game
Debunking historical figures is a popular sport. Just look at how Lytton Strachey pots at eminent Victorians or Roland Huntsford trashes Captain Scott. Should one wish to go after Walter Weston in the same way, plenty of ammunition lies at hand. Father of the Japan Alps? Weston neither invented nor popularised them within Japan. (See Inventing the Japan Alps.)

Well, then, should he be regarded as a pioneer of gaijin mountaineering? Again, not so. The earliest significant ascent by a foreign resident is generally accepted to be Rutherford Alcock’s ascent of Mt Fuji on July 6, 1860 (or September 11 according to the modern calendar), almost three decades before Weston arrived in Japan on the first of his three visits.

True, Alcock’s climb was motivated by politics rather than sport – the British envoy wanted to assert his rights to move freely within Japan under the terms of the 1858 treaty – but it lacked for nothing in mid-Victorian style. The party celebrated their arrival on the summit with a twenty-one gun salute (led by Alcock’s pocket pistol), then sang the national anthem, and toasted the Queen’s health with a bumper of champagne.

As only diplomats could move freely at that time, they naturally accounted for the earliest wave of mountaineering by foreigners. Thus the second and third gaijin ascents of Fuji were made, respectively, by the Swiss and Dutch ministers in Japan. (The Swiss, led by Caspar Brennwalt, planned to bivouac on the summit but met with a thunderstorm that forced them to seek shelter in a pilgrim’s hut. That was six years after Alcock’s climb.) Ernest Satow also ranged widely through the mountains of Honshu during his first diplomatic posting to Japan, from 1862 to 1883.

The second wave
Hot on the heels of the diplomats came the savants. The Russian botanist Carl Johann Maximowicz (1827-1891) arrived in Japan late in 1860 and, in the course of the next two years, walked from Hokkaido to Kyushu, taking in mountains such as Unzen, Aso, Hiko, and Kuju on the way. Mountain exploration was incidental to his purpose: Maximowicz sent home 72 chests full of herbarium specimens. Another botanist, the German Wilhelm Doenitz, climbed Nantai and Fuji in 1875.

Geologists and geographers were no less active. In 1874, Benjamin Smith Lyman (1835~1920), an American mining engineer and surveyor, explored the Daisetsuzan while seeking the source of the Ishikari river. The following year, Heinrich Naumann (1854 –1927), a German geologist attached to the Kaisei Gakko, climbed Asama. Another geologist, John Milne (1850 –1913), known as the inventor of the seismograph, visited Iwate, Chokai, Gassan and Aso during his spell in Japan as a foreign advisor, which lasted from 1875 to 1895.

The real father of the Japan Alps
If any of these professionals deserved the title ‘father of the Japan Alps,’ it was probably William Gowland (1842 –1922), an English mining engineer employed by the Osaka mint between 1872 and 1888. Gowland was the first to compare the Hida mountains to their European counterparts. This he did in a chapter on the Hida and Etchu mountains that he contributed to the Handbook for Travellers in Central and Northern Japan, an early English-language guidebook compiled by Ernest Satow and Albert Hawes. In this account, published in 1881, he described the pinnacled ridges of central Honshu as something "that might perhaps be termed the Japanese Alps".

Gowland was well qualified to write about the Japanese mountains. While assessing the country’s mineral resources, he travelled widely through the Hida, Shin-Etsu, and Chubu ranges. In 1873, he climbed Ontake, in 1875, Tateyama, and in 1877, Norikura and other peaks in the Northern Alps. He may or may not have been the first foreigner to reach the top of Yari-ga-take. He also climbed Chokai, certain peaks in the Nikko region, and Odaigahara. However, he left no comprehensive record of his mountaineering, preferring to focus on his pioneering archaeological studies.

The Japan Alps from end to end
All this means that, when Walter Weston arrived in Kumamoto in 1888 – the year that Gowland went home – foreigners had already been exploring its mountains for a generation. There was at least one English-language guidebook to the back country of Honshu. And, as Weston himself noted, no less than 2,248 miles of railway had already been laid. These new arteries helped him cover a lot of ground during his first summers in Japan. And what he lacked in priority - which he never claimed - he made up for in sheer dynamism. He even mooted a traverse of the Japan Alps from end to end.

If Weston pioneered anything in Japan, it was probably the concept of mountaineering for fun rather than for diplomatic or scientific purposes. It was a novel idea at the time, and especially so for some citizens of Shinano-Omachi, the Big Town in Shinshu:-

After libations of tea had unloosed their tongues, they began to ply me with questions. “What is your honourable country?” “Have you come to search for silver mines?” “No, then it must be crystals?” That I was simply climbing for pleasure I found it very hard to persuade them …

This vignette appears in Mountaineering and Exploration in the Japanese Alps, which was published in 1896, the year after his return to England. Well received, Weston’s first book helped to bolster his standing in Britain’s Alpine Club, which had elected him a member in 1893. His paper on Mountaineering and Mountain Superstition in the Japanese Alps appeared in the club’s Alpine Journal (no.17), which is probably the oldest mountaineering periodical in the world. When Weston returned to Japan in 1902, as rector of St Andrew’s church in Yokohama, these connections were to win him new converts to the cause of alpinism.

Tea with Walter Weston
Quite unaware of Weston’s activities, the Yokohama-based banker and writer Kojima Usui had mounted his own expedition to Yari-ga-take in 1902. After their return, his sole companion on that trip, Okano Kinjiro, heard about the missionary and quickly arranged a meeting, which took place in Weston's drawing room some time in 1903. It was here, over a cup of tea, that Kojima laid eyes for the first time on copies of the Alpine Club's journal, as well as sundry items of modern mountaineering gear.

This conversation led, two years later, to the foundation of the Sangakukai or Japan Alpine Club. Kojima was also the moving spirit behind the club's own journal, Sangaku (“Mountain”), which was launched in the spring of 1906 on the explicit model of the Alpine Journal. All this makes Walter Weston, if not the father of the Japan Alps, at least the moving spirit behind modern alpinism in Japan.

The source for Hyakumeizan
Sangaku became a principal source for Fukada Kyuya, when he came to write the series of magazine articles that later became Nihon Hyakumeizan, now translated into English as “One Hundred Mountains of Japan”. Himself a member of the Japan Alpine Club, Fukada ransacked articles by Kojima Usui, Makino Tomitaro, Takato Shoku and a host of others in his researches on mountain lore and mountaineering history. On occasion, Fukada even used the journal as a guide for his own explorations:-

When I was at school in Tōkyō, the Jōetsu mountains were less explored than they are today and the Northern Alps were still fairly inaccessible. So I did most of my mountaineering in Oku-Chichibu, using Tanabe Jūji's Tours in the Japan Alps and Chichibu and the Chichibu issue of the Sangaku journal that I found in a second-hand bookshop. In those days, there were few paths, mountain huts were thin on the ground, and signposts almost non-existent. With rice and soya beans, a hatchet and a saw in our packs, we would light out for the empty mountains. If we had two or three free days, we preferred to spend them walking around the mountains of Chichibu, not in Tōkyō.

Take away Sangaku, and it is fair to say that Hyakumeizan would be a different and slimmer volume. Perhaps less colourful too. Maybe Weston deserves some credit for encouraging good mountain writing in Japan. Along with the founders of the Sangakukai, that would make him one of the great-grandfathers of Nihon Hyakumeizan.

Mountaineering and Exploration in the Japanese Alps, by Walter Weston

Photo: from Wikipedia entry on Kamikochi
Posted by Project Hyakumeizan at 6:10 PM 13 comments: