There was a guide from the Golden Age of mountaineering – one of those crusty types, with a patriarchal beard – who refused ever to start from the hut if the thermometer read above zero. I struggled to remember his name as we wallowed along our snow ridge. Of course, you wouldn’t get much mileage in the Japanese spring mountains if you waited for freezing conditions. But today was definitely too warm. 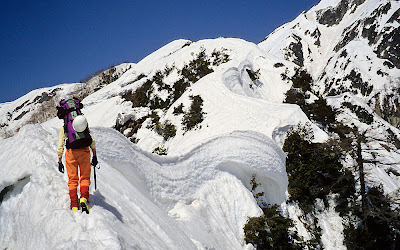 As if to emphasise the point, another huge slab of snow calved from the slopes beneath our feet. I watched, fascinated, as it subsided into the depths, breaking into tumbling blocks as it went. Was that a hollow boom as the debris hit the valley floor, or did I imagine that? Up ahead, Yamada-san seemed to be unimpressed by the show. 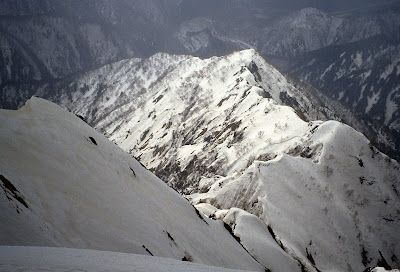 Our plan was to climb to the 2,842-metre north peak of Kashimayari by the Tengu ridge, but the wind was driving a flock of dun-coloured clouds up from the south, as if to frustrate us. Above, the summit gullies rustled and grumbled with avalanches. They hushed up whenever a cloud drifted by but resumed their murmur as soon as it passed, like unruly pupils when the teacher's back is turned.

Now we had to turn a step in the ridge by moving out onto the flank, kicking into a steep ramp of rotten snow. If, just now, the whole slope … I suppressed the thought and kept going, plunging my axe into the bottomless slush in a vain quest for security.

We paused for breath on top of the Tengu’s Head. A tengu is a mythical creature with a long nose. This one appeared to be ill-disposed towards intruders. “Well, we’re not going to get any further today,” said Yamada-san. “What about bivvying here for the night?” I noted the unusual outbreak of consultative democracy – could it be that even our leader had doubts? – and weighed up the options. Ahead loomed a steep headwall where the ridge met the main mountain. If that didn’t freeze in the night, we would be swimming up 40-degree slush. And if anything slid, we’d be taking the tour of Kashimayari’s famous north face. “I’m for turning,” I said. 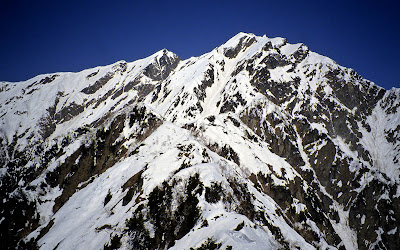 Next April, we came back. As one of the Hundred Mountains of Japan, Kashimayari has pulling power. “This is one of my favourites,” records the Hyakumeizan author, Fukada Kyuya. “Whenever I gaze out at the long line of the Northern Alps from some high viewpoint, the first thing I seek out is its double-headed peak. I never tire of looking at the exquisite composition of the northern and southern peaks, linked by the slightly lopsided curve of the ridge that hangs between them.”

This time, we’d decided to leave the Tengu in peace and climb the mountain’s East Ridge. After a cloudless night, the snow crunched reassuringly under our feet as we climbed up through the woods. We paused to allow a troop of monkeys cross our path, watched warily by a tribal elder, who perched on a tree stump to make sure we kept our distance. Then it was our turn to be wary, as we came out of the trees onto the narrow ridge. We stayed well away from the lee side, where great whorls and mattresses of snow drooped into space.

The East Ridge is so popular, says the Climbing Guide to Japanese Mountains, that some parties get caught up in traffic jams at the rock steps and have to turn back. But the Guide came out in 1981 and alpinism seems to have lost ground since then. When we came up to the knoll in front of the first step, we found just one other pair of climbers. Borrowing their shovel, we set to work building a high snow-wall round our tent site, just in case the south wind blew up.

We crawled out of the tent at 4.30am the next morning, reaching the first step in the ridge at dawn. Casper opted to climb direct, while I sidled out into the gully alongside, a variant that is not mentioned in the guidebook. A swift stretch of front-pointing on hard-frozen snow got me topsides in time to give a worried-looking Casper some unwanted advice on how to deal with the crevasse that threatened to open beneath him. The guidebooks also neglect to mention the risk of falling into the snowless voids beneath the creeping pine, but it is a real one.

We roped for the second step, which consisted of rock slabs stacked up like a tottering pile of crockery. A faded sling helped with an awkward move. Back in August 1930, this passage was off-putting enough to force first ascensionist Kanmuri Matsujiro and his companion into a nearby gully, where they managed to bypass the difficulties. Scored and pitted with the passage of innumerable crampons, the stone testified to the bustling traffic of former days. Today, by contrast, the ridgeline unfurled empty in front of us.

As far as we could see, that is. While the steps were distracting us, clouds had drifted in, depriving us of the view that by rights should have been ours. The best part of two vertical kilometres separates the top of Kashimayari from the valley floor, so that, on a good day, one would look out across a vast blue gulf to the distant opposite slopes of the Fossa Magna, the giant rift valley that cleaves through central Honshu. We paid attention to our footwork, sensing rather than seeing the drops to either side.

"One befriends a mountain by climbing it," Fukada says in his Kashimayari chapter. Unfortunately, we only managed a nodding acquaintance with our peak that day. The summit was a notional vertex wrapped in a grey shawl of lightly driving snow.

Yamada-san having vetoed the guidebook descent via Akaiwa Ridge (avalanche-prone, he said), we retraced our steps down the East Ridge. The snow suddenly turned to slush just as we finished down-climbing the gully beside the first step. Our crampons started to ball up; the south wind was blowing again. 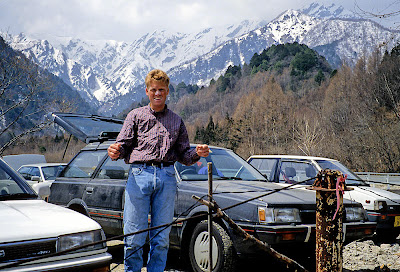 Some hours later, the weatherbeaten Subaru was hammering southwards along the Chuo Expressway. The air was full of haze, but Fuji's outline loomed large in the windscreen, clouds boiling from the volcano's western slopes. “I wouldn’t like to be up there now,” I observed to Casper. When we got home, the TV news announced that three people had that afternoon slipped to their deaths from Japan's highest mountain.