Kōsa: the dust in Japan's skies takes a turn for the worse

Back then, it was just part of the natural scenery. Swathes of dust – we understood it drifted in from China – overlay the spring snow, so that our skis cut white tracks in the tawny slopes as we swung down them. Even on high Tateyama (see photo below), the dust would collect in the gullies and rills, dulling the snow’s brilliance.

Kosa, a photo by Alpine Light & Structure on Flickr.
In recent years, “kōsa” – the term means ‘yellow sand’ – has taken on a more sinister character. Borne on high-altitude winds from China’s desert regions, it seems to be obscuring Japan’s skies more often, and for longer. And the same winds are bringing in more industrial pollutants too.

In March this year, the Fukuoka local government issued the nation’s first-ever health warning over smog from China; citizens were advised to stay indoors or to wear a mask if they ventured outside. In Korea, where the yellow sand is known as “hwangsa”, far more drastic measures have been taken: bad air days have forced the closure of schools, airports and high-precision factories.

Everyone agrees that breathing dust is bad for you. But the yellow sand’s other effects are disputed. Nobody is quite sure, for example, whether those characteristic milky skies help to warm or cool the earth’s climate. And the dust particles from China’s deserts might actually absorb and neutralise the industrial pollutants that cause acid rain.

Even so, the pollutants are getting through. A professor at Tohoku University has found that metallic precipitates lodged in the soil of Hachimantai – one of the Hyakumeizan – have increased two to fivefold from the levels of the 1950s. At the other end of the archipelago, a rare species of pine is dying off on the slopes of Yakushima, another of the One Hundred Mountains.

Nagafuchi Osamu, a researcher at the University of Shiga Prefecture, believes that industrial pollution is causing this "Waldsterben". He was alerted to the possibility during a hiking trip to the island in 1992, when he noticed black snow. Testing it, he found that the soot contained silicon, aluminium and other byproducts from the burning of coal. Whatever its effects on the trees, this dust was never part of the natural scenery.

Japan Times, No clearing the air over neighbour’s pollution, March 10, 2013

Is the Japanese Post Office trying to challenge the Hyakumeizan canon?

“Philately, that’s it – now I’m definitely going to take up stamp-collecting!” At moments of stress, back when we were serving our mountain apprenticeships, this was the phrase I’d sometimes hear from my rope companion. 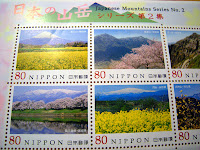 Yesterday, philately popped up again in the shape of a brown envelope bearing a Tokyo postmark. Tearing it open, I found a complete set of the recently issued “Japanese Mountains Series No.2” stamps, together with a note from Japan-based mountain photographer and fellow Hyakumeizan enthusiast Peter Skov.

It was most kind of Peter to send them over. For you really have to see the originals of these stamps to appreciate their superb colours and print quality; web images just don’t do them justice.

Sitting up there in pride of place, at the top left-hand side of the sheet, is Mt Fuji. As you’d expect, Japan’s top mountain has been adorning the nation’s stamps for quite a while, and especially in times of crisis.

After the 1923 Great Kantō Earthquake, for instance, a new stamp design featured the imperial chrysanthemum crest over Fuji against a background of cherry blossoms. These stamps had to be printed on private presses, as the earthquake had levelled the official printing office. 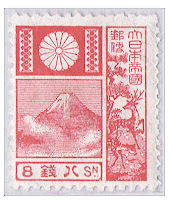 During the turbulent years of early Shōwa, Mt Fuji appeared on set after set of stamps – for the full details, refer to H Byron Earhart’s magisterial book on Mt Fuji. But more than crude nationalism may have been at work. According to Baron Takaharu Mitsui, writing on “Japan portrayed in her postage stamps” in 1940:

Even those Westerners who have not been to Japan know that Japanese nature is symbolized by Mt Huzi (sic) and the Japanese character by her cherry-blossom … The snow-crowned Huzi, the charming cherry blossom, the frost-braving plum blossom … these are to be taken at a higher connative worth than their mere ornamental value.”

When the smoke of war cleared, it temporarily became illegal to show Mt Fuji in a film, for fear that its silhouette would somehow rekindle nationalistic sentiments. And, whether or not by official diktat, the mountain also vanished from coins and banknotes for some years, reappearing only in 1951 (or was it 1969?) on a new 500-yen note.

But, curiously, this ban or abstention never applied to postal issues. On stamps, at least, it was as if Mt Fuji rose above the petty differences of the humans running around at its foot. A Japanese stamp catalogue explains the apparent anomaly in official policy as follows: 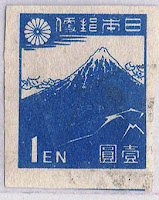 Postwar efforts at postage stamp making in Japan were marked by the implementation of a program for revising designs so as to symbolize a country out for peace. The first step toward the avowed object was the issuance on August 1, 1946, of a stamp, 1 yen, blue, R 217. The design is taken from the ‘Shower at the foot of Mt Fuji’, one of the masterpieces of Hokusai Katsushika…

Mt Fuji is, of course, the pre-eminent member of Fukada Kyūya’s One Hundred Mountains of Japan. And seven other mountains in the current stamp series – Tsukuba, Kasa-ga-dake, Ibuki, Zao, Gassan, Ryōgami, Kujū – also belong to this elite cohort. But that leaves two mountains that are quite unknown to Hyakumeizan fans: Nijō-san, a twin peak on the ridge dividing Osaka from Nara, and Iinoyama, a lowly if shapely eminence on Shikoku.

Neither was high enough for Fukada to include them in his 1964 list of Hyakumeizan – for which (with two exceptions) he stipulated a minimum altitude of 1,500 metres. But that doesn’t mean that these hills are lacking in aesthetic and literary charm. Iinoyama, for example, is a mere 422 metres high. Yet its Fuji-like form was once immortalised by no less a poet than Saigyō:

And never a day goes by
When no smoke curls from Sanuki’s
Fuji up into the morning sky. 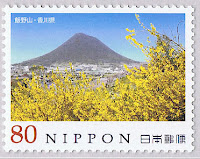 That still leaves the question of just why the Post Office selected this particular mountain for its Series 2 set. Now a reader of this blog suggests an intriguing possibility. As it happens, Iinoyama belongs to an “alternative Hyakumeizan” chosen and published by the mountaineer and writer Iwasaki Motoo in 2007 – a list that diverges from Fukada’s selection by no fewer than 48 peaks. Might it be that the Japanese Post Office has decided to let a little variety – not to say competition – into the Hyakumeizan canon?

Well, thanks again Peter. I had no idea that stamp-collecting could be so potentially subversive of the established order. You know, if the Post Office keeps stirring up the Hyakumeizan scene like this, I really could see myself taking up philately one of these days…
Posted by Project Hyakumeizan at 7:50 PM 7 comments: