Travelogue: a distant view of Mt Fuji leads to a poetic eruption

October 21: And there it was now, sliding under the port wing at 450 knots – the Boeing was still climbing. As I’d let ANA assign me a seat on the wrong side, I had to scurry across the plane and peer through a miserable porthole in the rear door. But Mt Fuji never disappoints. There it was, soaring above a scattered cloud-deck, a conical island in a limitless blue ocean. 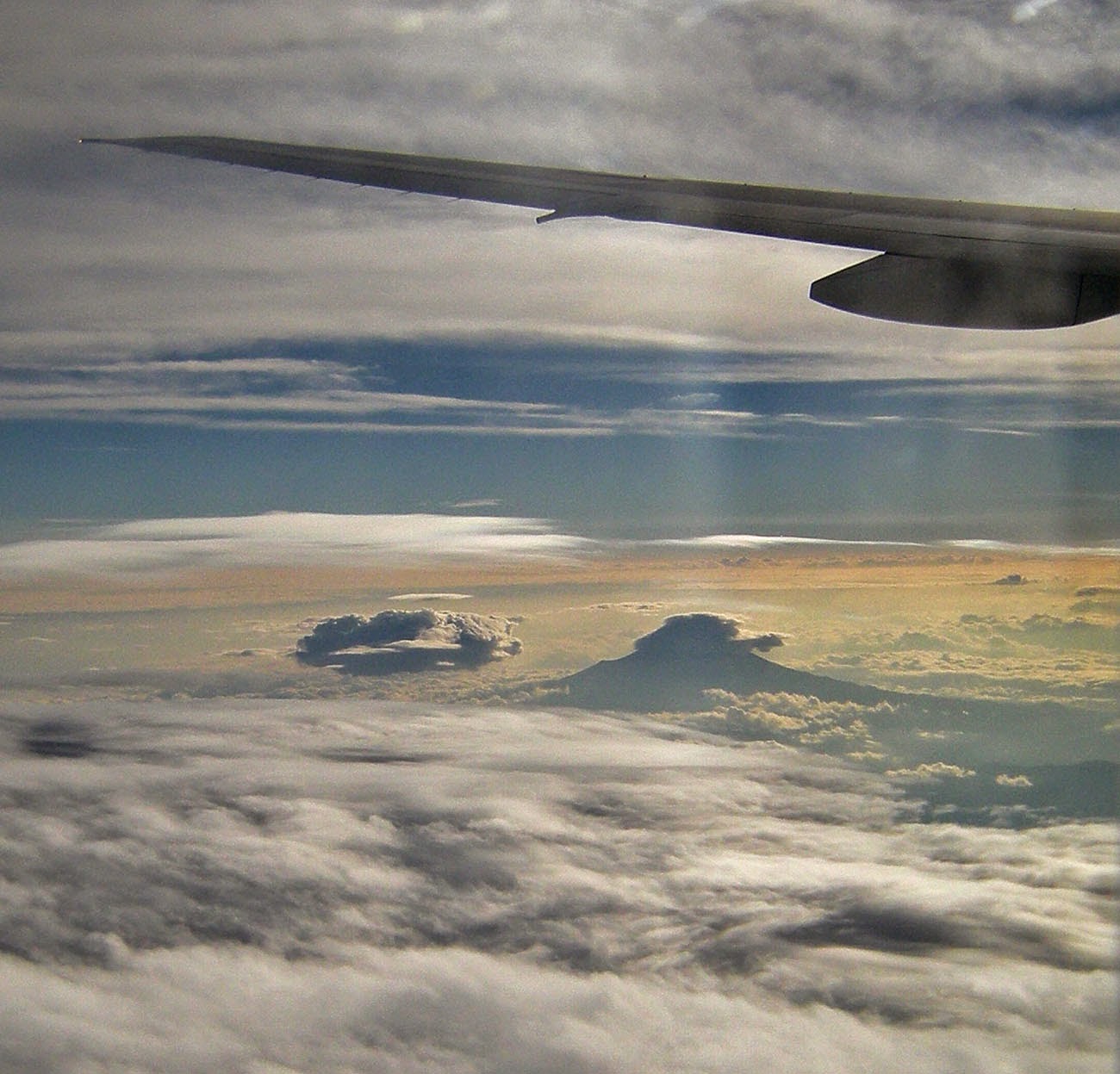 Like some mountain fashionista, Mt Fuji was modelling a turban-like capcloud. A shawl of rotor cloud trailed in its lee. I clicked away with my pocket camera until the spectacle drifted away aft. Returning to my seat, I noticed that the man in the row ahead had his newspaper open at a topical headline: “Three prefectures hold disaster drill to prepare for Mt Fuji eruption”.

That was quick, I thought – it’s only three weeks since Ontake blew and they’re already practising for the next one. Turns out, though, that this exercise had been planned for months – after all, the authorities drew up a “hazard map” for the mountain years ago. The drill scenario seems to have been based on the 1707 eruption on Mt Fuji’s southern flank.


Do the authorities know something we don’t? Well, probably not. A volcano’s intentions are notoriously hard to read. From time to time, seismometers have picked up movements of lava deep underneath the mountain – and, so far, nothing has happened. One thing is certain: Mt Fuji will erupt when it feels like it. Years ago, a poet summed up the matter perfectly:

Sometimes clouds furry like mufflers wind round and round Fuji
Sometimes classic pince-nez clouds float close by
The Osawa landslide must have carved out a huge mass of mountain
That too does not bother Fuji
Leaving everything to humanity and physics
Before long it may yet poke out again a tongue of fire.
That too is left to nature
Fuji is there
Fuji simply exists
Heaven overhead always 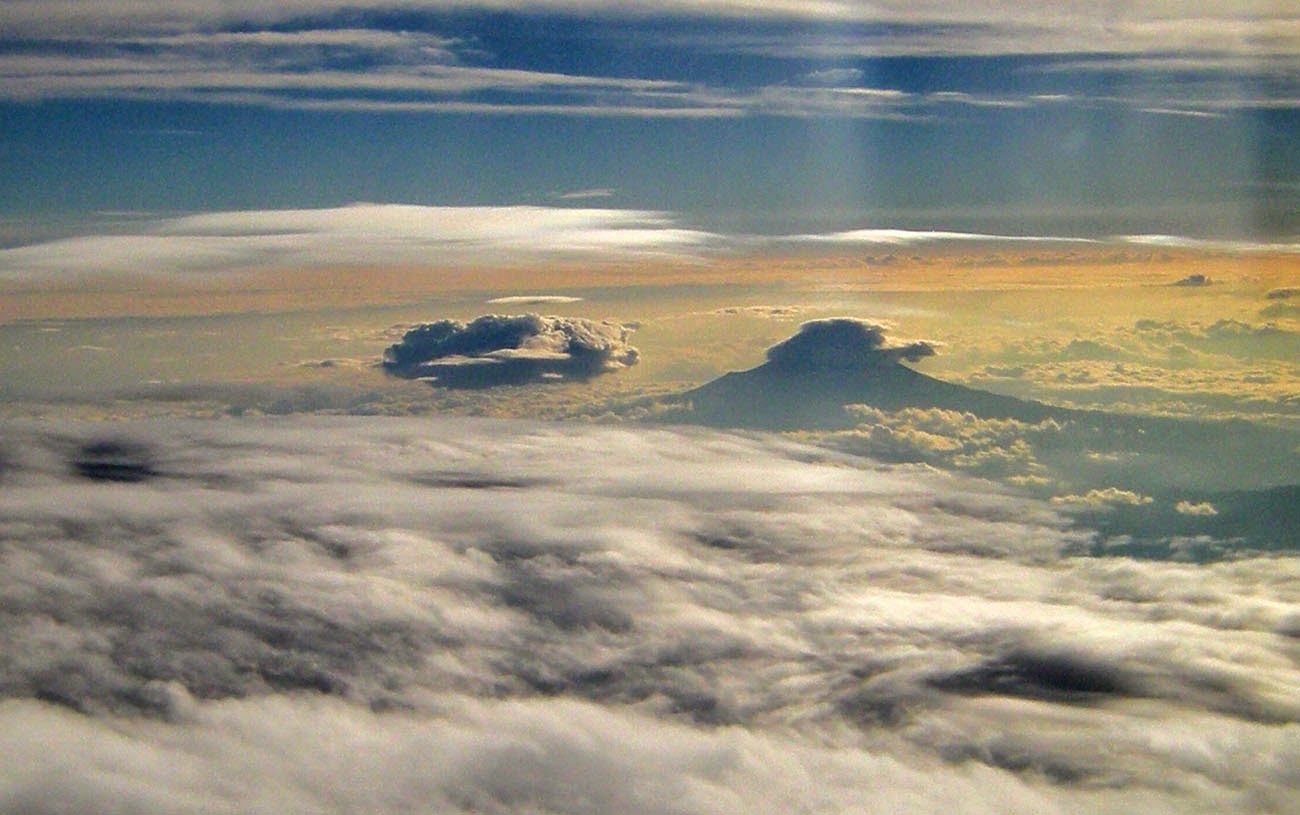 Posted by Project Hyakumeizan at 8:15 PM No comments:

Ten years ago today, the manned weather station on Mt Fuji closed, ending 72 years of continuous human habitation on Japan's highest summit. Here is a timeline on how Mt Fuji has served as a platform for science and weather observations, with links to related posts 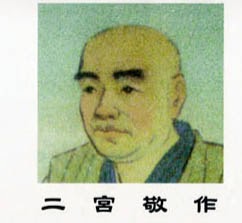 1828: Ninomiya Keisaku, physician, Dutch scholar, medical botanist and student of the German doctor, Philipp Franz von Siebold, climbs to the summit and estimates its height by measuring the air pressure, yielding an altitude of 3,794.5 metres - less than 20 metres adrift from the height as triangulated by modern surveyors.

1880 August: Thomas Mendenhall weighs the earth by conducting gravity experiments on the summit, assisted by Tanakadate Aikichi and others. So accurate is the pendulum clock he devises for this purpose that a similar one is later used to measure the speed of light. 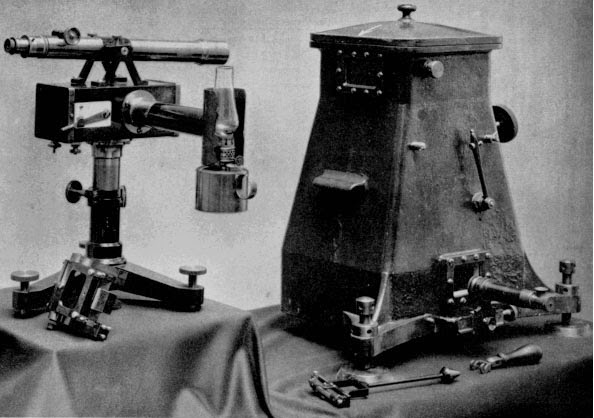 1889: Nakamura Kiyo'o and Kondō Hisajirō make a 38-day series of weather observations respectively from a stone hut on Kusushi-dake, one of the eight peaklets around the crater of Mt Fuji, and from beside Lake Yamanaka. 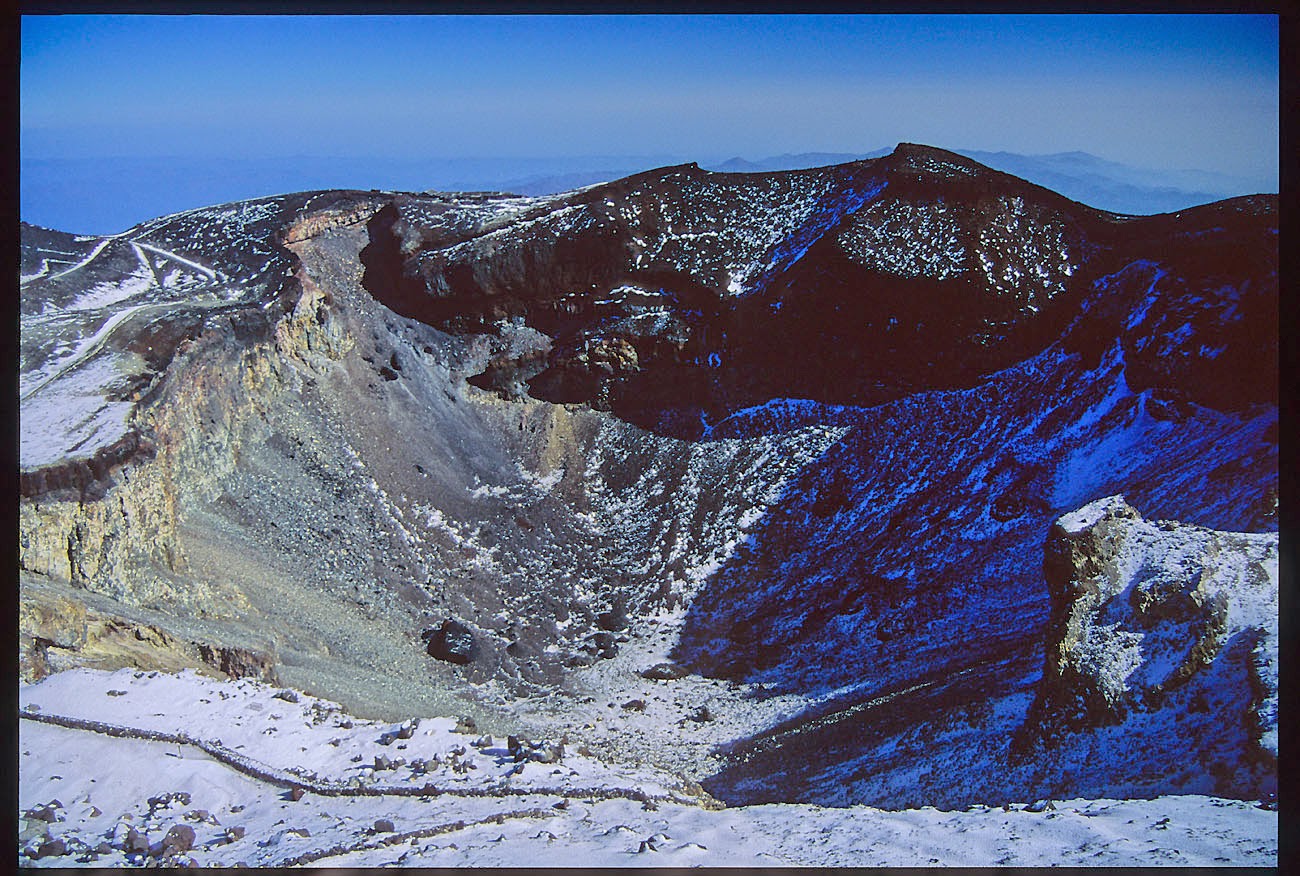 1895: officials from the Central Meteorological Office take readings on the summit during the summer. They too use a hut on Kusushi-dake. In the following winter, independent meteorologist Nonaka Itaru attempts to overwinter in a self-built summit hut under Ken-ga-mine, the highest summit, supported by his wife Chiyoko. They endure the cold for 82 days, almost succumbing to beri-beri, a deficiency disease, before being rescued in December. 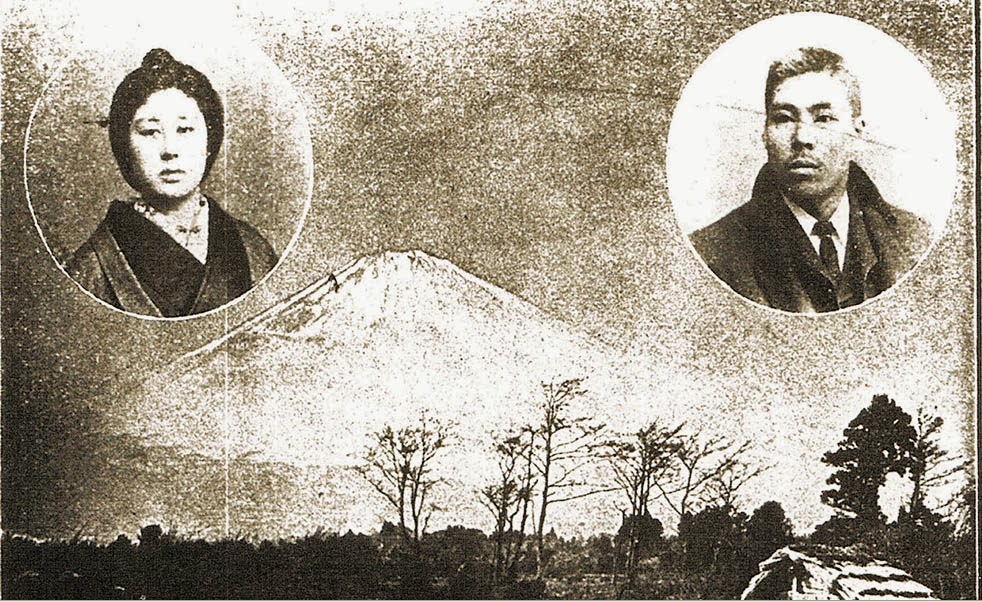 1927: meteorologist Satō Junichi builds a summit hut for weather observations, supported by a grant from Suzuki Seiji, president of the Tokyo School of Motoring.

1930 January-February: now in his fifties, Satō Junichi overwinters in his summit hut, supported by porter Kaji Fusakichi, proving that round-the-year weather observations are possible. Kaji will go on to climb Mt Fuji a record 1,672 times during his lengthy career.

1932: the government budget provides for one year of observations at the summit observatory as part of Japan's contribution to the Second International Polar Year. At the end of the one-year period, meteorologist Fujimura Ikuo and his team refuse to come down from the summit hut, so that observations can continue.

1934: the future of the summit observatory is secured by a grant from a foundation recently established by the Mitsui zaibatsu after a right-wing extremist had assassinated its director-general Takuma Dan.

1936: now officially styled the Mt Fuji Summit Observatory of the Central Meteorological Office, the observatory is moved from Yasu-no-kawara, a flattish area on the crater's south-eastern rim, to a new building on the mountain's highest point, Ken-ga-mine. In the same year, physicists from Nishina Yoshio's research group at Riken visit Mt Fuji to study cosmic rays.

1944: a squad of soldiers run a high-tension cable all the way from Gotemba to the summit to power a wireless relay station. The summit weather station also gets a direct electricity supply for the first time.

1945, July 30: the summit station is attacked by two enemy fighters. Some of the staff are injured by flying debris. This is the most damaging of three strafing attacks on the summit installations during the last two years of the war.

1964: the weather radar station is completed on Ken-ga-mine after a dramatic helicopter lift to bring in the surmounting radome. In the following year, the post office issues a 10-yen commemorative stamp and the radar tracks its first typhoon. 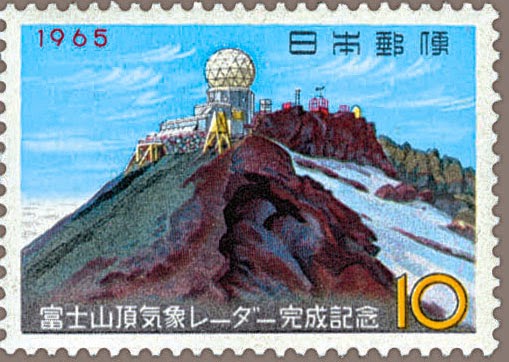 1985: the radar is upgraded with digital signal processing and colour output display.

1999 November: the radar is shut down and the famous radome is later taken down to a museum at the mountain's foot. From now on, typhoons will be tracked by satellites and two newer radar stations, one at Makinohara in Shizuoka and the other on Kurumayama in Nagano. 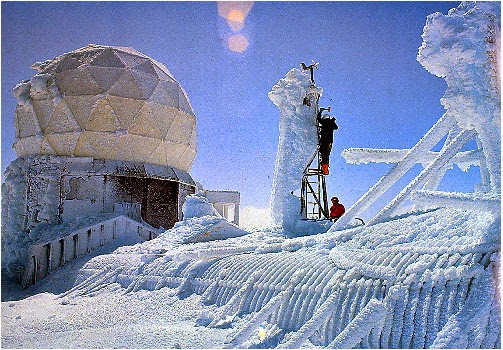 2004, October 1: the manned weather station closes too, ending 72 years of continuous human habitation on the summit of Mt Fuji. Automated instruments will continue to relay meteorological observations from the summit to a base station.

This timeline is adapted from the one on the website of the Society for the Valid Utilization of Mt.Fuji Weather Station, an NPO that seeks to preserve the buildings of the summit station for continued scientific activities. Additional information is from (ed) Dokiya Yukiko, Kawaru Fuji-san Sokkojo, 2004.
Posted by Project Hyakumeizan at 9:39 PM No comments: