There goes the neighbourhood

Deer and monkeys invade Japan's high mountains, decimating alpine plants and the birds that live off them 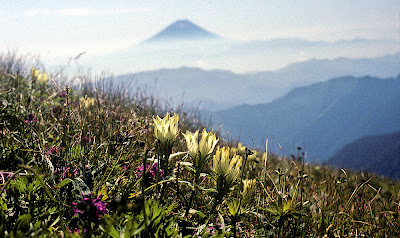 Just below Kita-dake's summit, a snow ptarmigan and her chick were taking a dust bath in the middle of the path. A beady glare from the hen assured me that she had no intention of moving aside; it was for me to walk round the birds. Unthreatened by predators in their high alpine habitat since the last ice age, snow ptarmigan (raicho in Japanese) have little fear of people.

On Japan's second-highest mountain, this was no unusual encounter in the 1990s. It might be now. When Nakamura Hiroshi visited Kita-dake in October 2003, he found none of the friendly birds on a mountainside that once harboured one of the largest colonies in the Japan Alps. Instead, the ground was covered with monkey droppings and deer tracks, something he'd never seen before at this altitude. 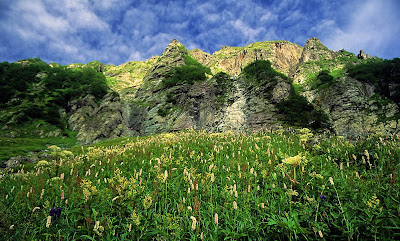 Nakamura, a professor at Shinshū University, has been surveying Japanese snow ptarmigan populations since 1981. But it is only in the last five to ten years that monkeys and deer have started to move up beyond the treeline into the alpine zone of creeping pine and alpine shrubs. The implications for snow ptarmigan, which depend on those shrubs for cover and food, are ominous, he believes.

Writing in Yama to Keikoku, Nakamura suggests that Japan's high mountains are being invaded on a broad front. In September 2002, he saw 30 monkeys stuffing themselves on bilberries (kuromame-no-ki) near the top of Otenshō-dake, an almost-3000er in the Northern Alps, Never before had he seen a monkey troop at such a height. 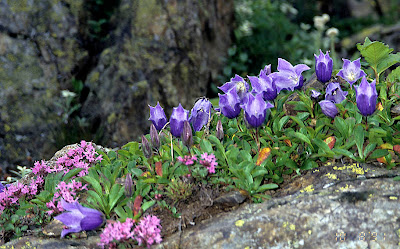 Then in June 2005, he made a traverse between Hijiri-dake and Tekari, two "famous mountains" in the Southern Alps. Deer tracks were seen everywhere along the connecting ridges and all the alpine flowers had been grazed away, except for the poisonous species. The damage was most severe towards the south of the range, between Izaru-ga-dake and Tekari, where all the flower fields (hanabatake) marked on the map had been erased. "And what has already happened in the Southern Alps is only a matter of time in the Northern Alps," warns Nakamura. 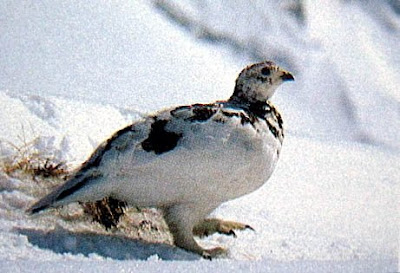 The snow ptarmigan are menaced on all sides. Monkeys and deer are cropping their food supply. Kestrels and crows, also newcomers to the mountaintops, are raiding their nests. Foxes are hunting them. Monkeys have been seen stalking the unwary birds; they may have acquired a taste for fresh ptarmigan.

In the past, all these predators and competitors stayed down in the beech and oak woods at the mountain's foot. Dark and inhospitable, the evergreen forests at the middle altitudes kept them from foraging higher up. What has now pushed them beyond their traditional bounds? 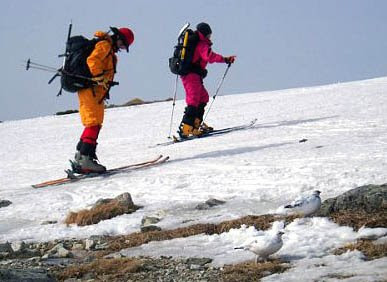 Professor Nakamura believes that modern agriculture has caused the population of wild animals to explode. The decline of hunting has also helped numbers to increase. "But it's not the wild animals that have changed their habits," he concludes. "It's that we Japanese have moved from a co-existence with nature to a wholly human-centred way of life."

危機に瀕するライチョウ：日本の高山で、今何がおきているのか ("Snow ptarmigan on the brink of disaster – what is happening in Japan's high mountains") article by Professor Nakamura Hiroshi (中村浩志）in Yama to Keikoku, one of Japan's leading mountaineering magazines, January 2007 edition.

In May 2009, a snow ptarmigan was spotted on Hakusan for the first time in 70 years. The bird became extinct on Hokuriku's highest mountain in the early Showa years. Full report in the Chunichi Shinbun
Posted by Project Hyakumeizan at 5:43 PM 9 comments:

If you're looking for the dark side of mountains, then Nihon Hyakumeizan may not be the book for you. Fukada Kyuya climbed not to test his limits but to find solace: "The hour I spent on that bright and peaceful top was as close to heaven as one gets in this world," he wrote after climbing one of his Hundred Mountains.

To round out his mountain portraits, Fukada ranges far and wide through the treasure-house of Japanese literature. At first sight, these gleanings support an Arcadian view of mountains and mountaineering. The essay on Adatara, for example, starts with a couple of lyrical verses from the Manyōshū, Japan's earliest poetic anthology, and then cuts to two modern poems by Takamura Kōtarō (1883– 1956).

In the second of these poems, Takamura and his wife Chieko are sitting under a tree, looking out at an idyllic landscape:-

Adatara, in Fukushima Prefecture, was Chieko's native mountain. She was born in nearby Adachi-gun in 1886, the eldest daughter of a prosperous brewer – hence the sake sheds in the poem. The Naganuma family took a progressive attitude to the education of women. After Chieko showed artistic talent, she went on to study first at a high school in Fukushima and then at Nihon University.

A classmate recalled that Chieko was "calm, reticent, and shows enthusiastic concentration in whatever she does. She is also very humorous and amazing. For instance, she learned to ride a bicycle more quickly than the rest of us. She also invented an "easy hakama" that required no folding. She was good at playing tennis and surprised us with her sizzling shots that we were hardly in keeping with her meek and quiet character."

After graduating from the university's home economics department, she decided to stay in Tokyo and pursue her vocation as an artist, often painting in oils. One commission was to design a cover for the first edition of Seito ("Bluestocking"), a magazine for women writers launched in September 1911.

Around this time she met Takamura Kōtarō, who had recently returned from Paris, where he had studied sculpture and art. After a painting trip to Kamikochi, they announced their marriage in 1914. Chieko then branched out into writing. She earned a certain amount of recognition as one of the "New Women" authors, but not enough to alleviate a hardscrabble existence. As Kōtarō recorded in one of his famous Chieko poems:

(From the Chieko Poems, translated by Paul Archer)

Meanwhile, the Naganuma family was struggling in the post-war recession. After the death of Chieko's father in 1918, the sake business started to go downhill. The firm went bankrupt in 1929, depriving the family of its home. The shock was too great for Chieko: a few years later, she began to show symptoms of schizophrenia. Her decline is movingly chronicled in the Chieko poems. One of these is set below Bandai, another of the One Hundred Mountains:-

The foothills below the forked peak of Mt Bandai
Lour grimly at the August sky,
Their slopes seethe
With pampas so overgrown it could bury you.
My half-mad wife sprawls in the grass,
Leaning heavily on my arm,
Sobbing like an inconsolable girl.
It won't be long now, I'm cracking up.
Looming inevitability, cornered
By the demons crowding her mind,
There's no escape, her soul severed away.
It won't be long now, I'm cracking up.
The mountain wind blows coldly on my hands wet with tears.
I gaze at my wife without speaking.
She looks back for the last time from the edge of consciousness
And clings to me.
Nothing now can bring my wife back to me.
My heart cracks in two, slips away
And becomes one with the world which silently surrounds us.

Kotaro took his wife to various hot springs but her condition worsened. During this period, he visited the village office which administered Chieko's permanent address, and registered their marriage. She died in 1935, after contracting tuberculosis.

In the light of Chieko's life story, it's worth re-reading the section of the Adatara chapter in Hyakumeizan that mentions her. It starts like this:-

The name of Adatara, as it is seen from Nihonmatsu along this route, has been immortalised in the poem by Takamura Kōtarō. Chieko, the poet's beloved wife, was born to a brewer's family in Nihonmatsu. While living in Tōkyō, she fell sick and recovered her health only after moving back to the family home in the country. Takamura wove the artless words of his wife into these verses:

There's no sky in Tōkyō, says Chieko
If only I could see a piece of sky, says she
………….
Looking into the distance, she sighs
The blue sky bends over Adatara every day
That's the sky where I belong, she says.

Without spelling it out, Fukada alludes to the whole trajectory of Chieko's life. He puts more into his mountain essays than appears on first reading. There are shadows as well as sunlight, depths as well as heights. That may be another reason why his book has stood the test of time.

Translations of the Chieko Poems by Paul Archer

The dreamer of Fukushima: Chieko Takamura (source of images above)