April 29, 4.30am, Sarukura: A small mutiny broke out at dawn. “No way,” said Tim, “will I carry skis up there.” I knew better than to argue with a Kiwi, so we set off from our roadhead bivvy without them. Discipline, I ruminated, seemed to be crumbling in this club. 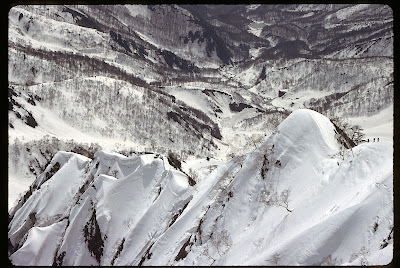 Half an hour later, Tim’s demurral didn’t look so bad. A giant avalanche had carved a trench down the middle of Shirouma’s Great Snow Valley, leaving sidewalls of frozen snow that rose high over our heads. Negotiating this tank-trap was certainly easier without skis. 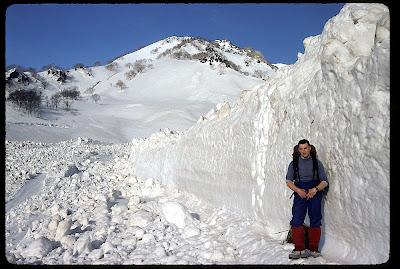 Later than planned, we paused for breath under the Main Ridge and I fished the topo from my pocket. The supremely logical and direct line that it showed to Shirouma's summit was somewhat out of kilter with the actual scene – all we could see from here was a medley of snow humps and false crests. 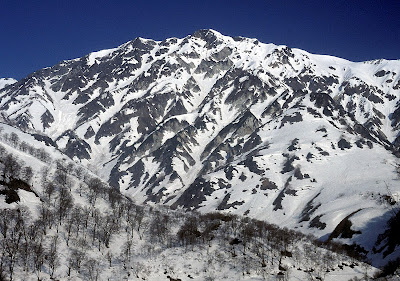 Like the white horse in its name, Shirouma rears almost three kilometers above the floor of the Fossa Magna, the valley that rifts the banana of Honshu in twain. The same forces that raised this mountain also pulverised its rocks, so that its steeper ridges are rarely climbed in summer. Climbers only get a look-in after winter storms lay down generous folds of snow over the scrub, the creeping pine, and the tottering arêtes. 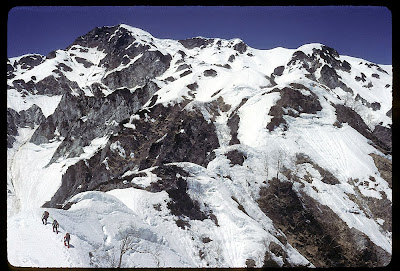 History relates that the Shuryō was first climbed in 1931 by a trio led by an “OB” of Kobe Commercial University. “OB” stands for ‘old boy’, membership in a Japanese university alpine club being for life. As all of Honshu’s high mountains had been climbed in winter by this time, the activists were seeking out “variation routes”. In Shirouma’s Main Ridge, they notched up a full-credit one: from base to summit is 1,400 metres. 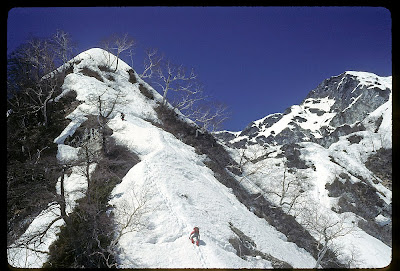 The first few of those metres caused our hearts to sink. On this east-facing slope, the early morning sun had already rotted the snow. Post-holing knee-deep, we ploughed a trench to the ridge-crest. Up there, the snow was firmer and we started making progress.

Absorbed in the twists and turns of our tightrope arête, we hardly noticed the sounds of an altercation. So, when we came up on this scene, we needed a few seconds to size it up. In front, the snow had slipped away from the ridge, revealing matted grass and bushes, and leaving a near-vertical slab of hard snow beyond.

Spreadeagled on this facelet – like some creature of ill repute nailed to a barn – was a youth in the knickerbockers and red shirt of a traditional university climbing club. The noise was coming from his sempai (senior), who was bawling out his charge from a safe stance on the ridge below. Although a lesson in lead climbing appeared to be in progress, its recipient was too gripped to move up or down.

Exchanging glances, Tim and I moved through; the snow-wall looked more difficult than it was. Probably the student climber’s main problem was the angst caused by his senior. We hurried to make ourselves scarce. 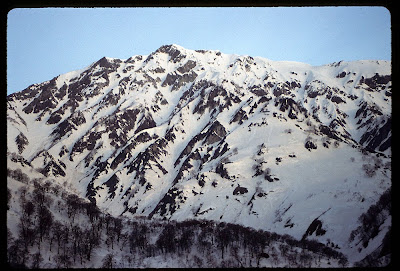 Japan’s student alpine clubs (sangakubu) are still structured on a rigid hierarchy that is rooted in the pre-war order, writes Wolfram Manzenreiter, a Viennese sociologist who has taken a scholarly look at power structures within Japan’s climbing scene. That is, he explains, alpine clubs continue to operate on the principle that strong leadership requires complete subordination.

One might ask why the kohai (juniors) put up with this st*ff. “One powerful factor,” Manzenreiter says, “probably was the Japanese folklore model of achievement. The belief that being severe with oneself is a prerequisite for improvement and achievement is certainly a popular belief throughout twentieth-century Japan. The emphasis on perseverance, will power, and mental strength created a particular, irrational image of sport with ample place for struggle, agony and torment, for blood, sweat and tears.”

On occasion, the agony and torment get out of hand. In May 1965, the hiking club (wandervogel) of the Tokyo University of Agriculture (Nōdai) achieved notoriety from what the media called the "wangeru shigoki jiken". During his first mountain trip with the university club, 18-year-old Wada Noboru died of physical exhaustion. Police investigators found that nearly all of the new members who had entered the club that year had suffered injury from heavy physical abuse. They were forced to carry 50-kilo loads, while second-year men were assigned 25 kilos, and the seniors climbed without any load at all.

Any freshmen who showed signs of fatigue or weakness were sworn at or even beaten up by their older comrades. Slaps in the face, kicks with nailed mountain boots, blows on the head with ice axes, and verbal abuse were common. The student leaders and four other members of the club were charged with physical injury resulting from negligence, as was the teacher who had authorised the leaders to drill the rookies. Thus Professor Manzenreiter.

All this happened a long time ago, yet echoes of shigoki still seemed to reverberate on Shirouma. Mercifully, the sempai's rasping tones faded into space as we moved higher. Anyway, we had other stuff to worry about: the warming snow was starting to clog our crampons, so that we had to knock them clear at every step. 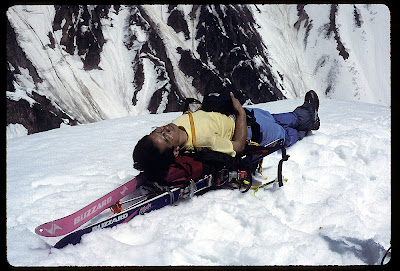 We reached a knoll that I recognised from a previous ascent with our own sempai, Yamada-san. On that occasion, we'd been carrying skis – nobody dared to leave them behind – and we'd staggered onto this top and collapsed onto the snow, not even taking off our packs. Now, at least, we could see the summit. It leered at us over a forbidding array of intermediate bulges. 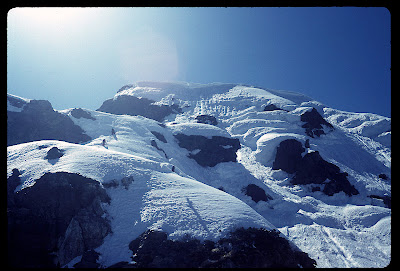 The Shuryō saves the best for last. Two rope-lengths below the summit, the ridge merges into a 45-degree headwall. By now, the sun had already slipped behind the mountain. Taking a breather in its blue shadow, we looked up at the huge cornice, ponderous as a minibus, that hung above our heads.

Tim found a rusty piton and threaded a sling through it. In our club, it seemed, it would be the sempai who was going to lead this pitch. Obediently, I tied into the rope. As I did so, a solo climber came up beside us. He was out training for the Himalaya, he said; the OBs and students of a famous agricultural university’s alpine club were off to Nanga Parbat.

You have to hand it to these guys, I thought – they have big dreams and they carry them out, probably with quite a bit of financial support from the seniors and OBs. We'd also heard about an accident where a ski-mountaineer had disappeared down a gully. A helicopter had searched for days; the bill came to ten million yen, far more than the insurance cover. Whereupon the club members picked up the tab themselves to prevent the man's family being bankrupted. 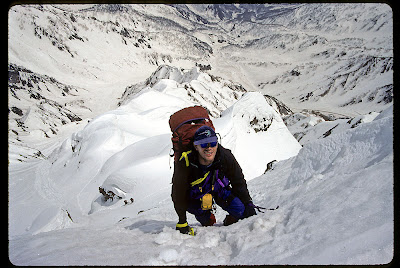 I started upwards. Like many a north face, the headwall feels steeper than it is. I didn't need to look down to sense the Fossa Magna yawning under the rear-points of my crampons. Then I reached the gap in the cornice and pulled through from shadow into light. 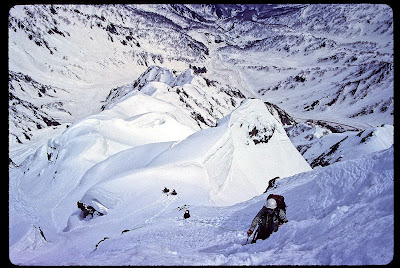 Ramming my axe into the snow, I set up a boot-axe belay for Tim. Below him came into sight the senior and his junior, now roped together like Pozzo and Gobbo in "Waiting for Godot". There was no more shouting; the senpai was out in front. "Climb when ready," I called down to Tim. 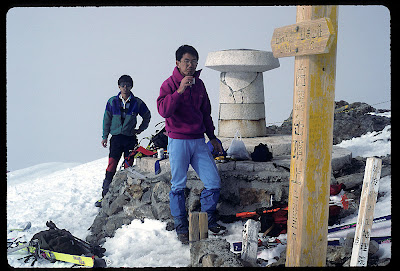 Standing around the summit monument, we shook hands with the solo climber. “See you on Tsurugi next week,” he said. It was time to go. Gazing down at the plunging slopes of the Great Snow Valley, we reckoned up the kilometres of ever-softer afternoon slush that separated us from the waiting Subaru. Now we were really going to regret those skis. 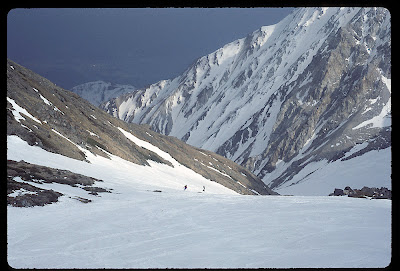 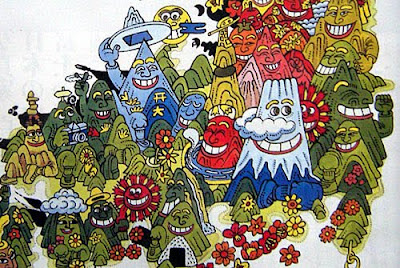 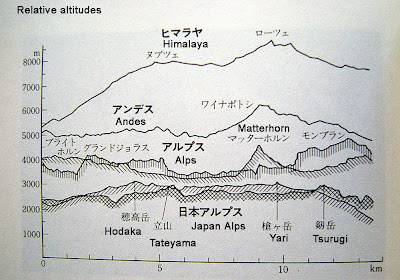 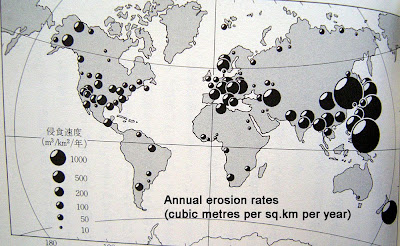 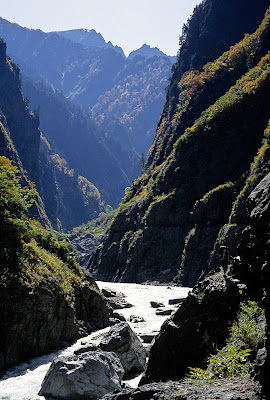