But should an aspirant meizanologist be reading Japanese folk tales? If they happen to be those selected and translated by Royall Tyler, then the answer has to be yes. To quote the book’s blurb, Japanese Tales is a collection of 220 stories from medieval sources that opens “a window into a long-vanished though perennially fascinating culture”. 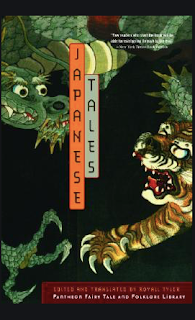 For the meizanologist, the window gapes wide at Tale 88. Entitled “The wizard of the mountains”, this tale comes from Konjaku Monogatari (Tales of Past and Present), a collection of about a thousand stories that dates back to around 1100 CE. It sketches the life of En-no-Gyōja, known to all readers of this blog as the founder of Japan’s syncretic tradition of mountain religions.

By this account, En-no-Gyōja was a late starter. At the age of 34, he turned his house into a temple, enshrining there an eight-foot tall image of Miroku that he’d made of clay. Then he went to live in a cave in the Katsuragi Mountains in Yamato Province, wearing clothes made of bark and eating only pine needles.

One day, from Ōmine, he caught sight of Shaka Peak from far off, and was struck by its unusual form. This mountain clearly had power. When he went to inspect it more closely, En-no-Gyōja found, hanging from a tree, a tall skeleton with a bell in its left hand and a single-pronged vajra in its right.

The discovery was explained when Miroku appeared to him in a dream. “For seven of your past lives you were an ascetic on this mountain,” the god explained. “The skeleton you found is your own. If you want the bell and the vajra, chant the Mantra of the Peacock King.”

En-no-Gyōja did as he was told, and soon acquired supernatural powers. The scene now shifts to Golden Peak in the Ōmine range. This sacred mountain was believed to have flown in from India, after breaking off from the mountain where the Buddha preached the Lotus Sutra. In 552, during the reign of Emperor Kimmei, it wafted thousands of leagues on a white cloud and landed in Japan.

Seeing how powerful Golden Peak was, En-no-Gyōja thought it should have a god who could help sentient beings toward salvation. To this end, after a thousand days of prayer, he enshrined Zaō Gongen there. He then coopted another god, Hitokotonushi, to build a stone bridge so that his followers could reach Golden Peak.

Understandably, Hitokotonushi jibbed at this forced labour, and denounced En-no-Gyōja to the authorities. This resulted in En-no-Gyōja’s famous exile to Ōshima in the province of Izu. Here he whiled away the time by flying to the top of Mt Fuji every night. But Hitokotonushi continued to intrigue against him at court, so that eventually En-no-Gyōja tired of living in Japan. So instead, he put his mother in a bowl and flew across to China, where he toured every sacred peak.

Accounts of En-no-Gyōja’s life often leave it at that. But the Konjaku Monogatari version adds a final twist. It seems that Monk Taichō, the pioneer of Hakusan, set out on a pilgrimage to the Katsuragi and Ōmine mountains. And there he found Hitokotonushi imprisoned within a mossy boulder. But when Taichō tried to release the refractory god, En-no-Gyōja suddenly appeared and scared him off. And nobody ever tried to free Hitokotonushi again.

To find En-no-gyōja and Taichō facing off in the same story is a surprise, at least to this blogger. Apart from worshipping different deities and climbing different mountains, they are traditionally assigned to different centuries, En-no-gyōja to the seventh and Taichō to the eighth.

Even more widely separated are the primary sources for their legends – En-no-ozunu, another name for En-no-Gyōja, appears as early as 797 CE in the Shoku Nihongi, an early imperial history. Whereas the best-known record of the Taichō legend dates back only to 1325, about six centuries after the Hakusan pioneer is supposed to have lived.

In terms of Western culture, this is a bit like finding Robin Hood suddenly shouldering his way into the court of King Arthur. For King Arthur is a very ancient legend, Robin Hood a much more recent one. Nevertheless, the mythical king and a thinly disguised Robin Hood did eventually show up in the same narrative. This was in T H White’s The Sword in the Stone, a novel published in the 1930s.

Like T H White, the author of the Konjaku-monogatari tale – or a predecessor – must have had a motive for mashing up two distinct stories. Unlike T H White’s case, though, it remains obscure who first brought Taichō into En-no-Gyōja’s story, or when or why. Was it perhaps because religious sects centred around Ōmine or Mt Fuji feared competition from the Hakusan faith? It would be interesting to find out more …