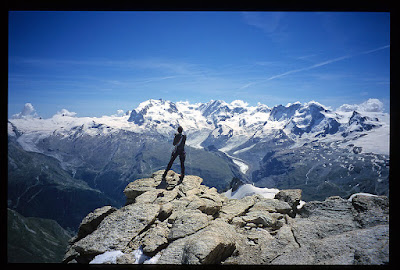 Image: Alpinist N. on the Wellenkuppe (Photo courtesy of Alpine Light & Structure).
Ink: From Mountains with a Difference (1951), by Geoffrey Winthrop Young.

But whom does not the alchemy of mountaineering melt into his essential gold?- whenever there is gold in him. There have been cases, I know, to show that a man may climb, and climb and prove a villain. But he will have climbed from vanity in his own prowess, and not from love of mountains, and the truth in him will soon out. Even in those first years, when it as still easy to know, or know the name and the performance of everyone climbing in our country, here and there appeared those whom I called the 'three year' men, men who flashed into climbing for its sensation and its acrobatics, and from vanity. They soon exhausted the sensation; sometimes they killed themselves; and in any case they disappeared once more from our ken. But the majority of those who were first drawn to the hills and their novel adventure were men of character and often of outstanding ability. These men, tested as comrades by mountain danger, difficulty and fatigue built our great mountaineering tradition.

Posted by Project Hyakumeizan at 11:46 AM No comments:

Elevated temperatures on the first ski-tour of the year
Freiberg Kärpf in the Swiss canton of Glarus was an easy choice for the year’s first ski-tour. The mountain usually has enough snow. By bus and train, it lies only two hours or so from Project Hyakumeizan’s front door. And, as a “Hausberg” of Elm, the homely alpine village at its foot, Kärpf almost qualifies as a local Meizan. 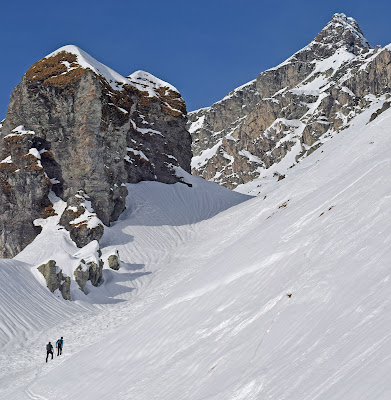 On New Year’s morning, the scenery looked as it should – a ring of snowy mountains stockading the head of the Sernftal. Only the spring-like warmth seemed to strike the wrong note.

A news screen in the train had alerted us to the near-record temperatures. At the year-end’s midnight, it said, the freezing level had risen to 3,764 metres – a height exactly equal to Mt Cook’s in New Zealand (before the top fell off) and not much lower than the Eiger’s. You’d normally expect it to be freezing in the valley at this time of year. 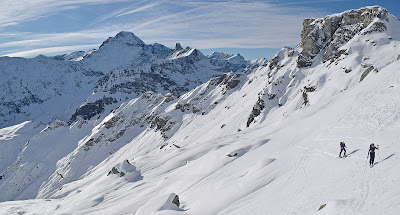 There was an alpine guide of the past who habitually refused to leave the hut if the temperature rose above zero – and this was on a summer night. Today, he’d no longer be in business. Yet his judgment was sound. A warm breeze brings out the worst in the mountains, from weaker snow bridges to increased rockfall.

Skiing up through the woods, still in shadow, there was time to think through the risk factors. Kärpf has no glaciers and any loose rocks would probably hold their peace. Paradoxically, the warm night’s most serious effect would most likely be a hard-frozen snowpack – thanks to the sorcery of radiation cooling, which can chill the snow overnight even when the air temperature is well above zero.

And so it proved. In the mountain’s shadow, the icy glaze made for some tense moments on the steeper traverses. Such places recalled some recent accidents, where ski-mountaineers had fallen to their deaths from peaks traditionally thought to be harmless.

Long flutings corrugated the slopes. In the slanting winter sunlight, they were as graceful to behold as they were untractable to ski across. It was hard to believe that these were rainwater runnels – at 2,600 metres in midwinter. But, then again, rainfall was recorded last summer for the first time ever at the top of Greenland’s ice cap, at 3,200 metres. So why should we be surprised by midwinter rains at this southerly latitude?

Freiberg Kärpf is famous for its ibex, chamois, deer and other wildlife. Some say it is “the oldest game reserve in Europe”. If so, this is due to one Joachim Bäldi. In 1548, seeing that the wild animals were being hunted to extinction, the chief magistrate had the mountain set aside as a wildlife sanctuary, a status it retains to this day. I wish I could find out more about this far-sighted Landamann. You know, we could use some administrators like that today …
Posted by Project Hyakumeizan at 4:19 PM No comments: