Korea and Taiwan too have honour rolls of their favourite one hundred summits.

If any yama-holic is reading this, perhaps sit down and pour yourself a stiff drink. Climbing the one hundred mountains of Japan is challenge enough, especially if you go about it by fair means. But what if you then set out to scale the hundred mountains of Korea? And, after that, the matching set in Taiwan?

Turns out that mountain lists have been proliferating all over northeast Asia. Korea’s one hundred mountains were compiled in 2002 by the country’s Forest Service, a government agency, presumably to promote tourism. But a hiking organisation and a mountain goods company have put together other lists.

Understandably, the mountains in the official Korean list are all in South Korea. And most appear to be of modest stature. That can't be helped. For the sad fact is that all of the Korean mountains that top out above 2,000 metres – about one hundred of them – stand in the northern half of the peninsula.

The noises emanating from Panmunjon this week were encouraging. If they lead to an outbreak of peace, it might one day be possible to compile and climb a unified one hundred mountains of the Korean peninsula. Until then, however, the highest one, Mt Paektu, will be bestridden by the Supreme Leader alone.

While waiting for North Korea to open up, yama-holics would do well to consider the one hundred mountains of Taiwan. This list, like Japan’s Hyakumeizan, is completely unofficial. It was put together in the 1970s by a group of prominent Taiwanese mountaineers.

Known as the Baiyue (百嶽), the one hundred peaks are selected from among Taiwan’s roster of 260 peaks that top 3,000 metres. Actually, two of them turned out after a re-survey, to come in slightly under that height, but they kept their place in the list on the merit of their other qualities.

That’s an important point: the Baiyue are by no means all among the highest hundred mountains in Taiwan. Instead, they excel for their aesthetic qualities, including uniqueness, danger, beauty and prominence. This too makes them kith and kin to the Nihon Hyakumeizan, as curated in the late 1950s and early 1960s by a repurposed novelist.

The Hyakumeizan author, Fukada Kyūya, chose his mountains for their character, history and "extraordinary distinctiveness". And he would include a mountain only if he had climbed it himself. Height was a secondary consideration; ideally, a "Meizan" should top 1,500 metres, but two in the list - Tsukuba and Kaimon – do not.

The Nihon Hyakumeizan originated as a magazine series commissioned by Ohmori Hisao, then a young editor and today a doyen of Japan’s mountain literary scene. Later, the articles were collected into a book. Only then did the notion of actually climbing all these mountains take hold with the mountaineering public.

In Korea and Taiwan, things happened the other way round. The lists arrived first, and it may be that the definitive books about their one hundred mountains have yet to be written. But that’s OK too. As Thoreau said, “If you have built castles in the air, your work need not be lost; that is where they should be. Now put the foundations under them.”

You know, the same might be said for the idea of actually climbing them all. Yama-holics, remember you read it here first ...
Posted by Project Hyakumeizan at 2:34 PM 1 comment: 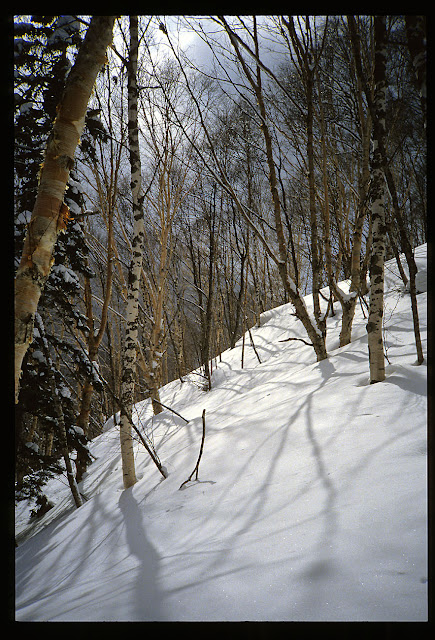 Ink: From the poem "Mountain woods" by Takamura Kōtarō, translated by Hiroaki Sato:

The framework of Japan, not any other country,
exists sternly in mountain woods.
Our country's reason for being in the world
must be based on this framework.
Maple branches are burning in the hearth.
Today I talked with a charcoal burner about dairy farming.
May rain falls ceaselessly,
in the quiet village which has finished rice-planting
cuckoos are making chordal dots.
The past is remote, and so is the future.

Posted by Project Hyakumeizan at 9:19 PM No comments:

How a visit to Kamikōchi, with some help from Mr and Mrs Weston, brought together two Taishō-era artists

Readers of Nihon Hyakumeizan encounter the sculptor Takamura Kōtarō and his wife Chieko in Chapter 21. A poem by Takamura portrays the artist couple sitting on the slopes of Adatara-yama, a 1,700-metre mountain in Fukushima Prefecture. There’s hardly a hint in the Hyakumeizan chapter of the sad trajectory of Chieko’s life, which Takamura would later immortalise in a series of poems.

It turns out that mountains had earlier helped to bring Takamura and Chieko together. The story of their visit to Kamikōchi in the Japan Alps is described in a prose memoir of Chieko’s life that Takamura wrote two years after his bereavement. While staying in that mountain valley, the couple met several luminaries of Japan’s mountaineering and artistic scene, as Takamura records...

It was Chieko's pure, single-minded love that finally pulled me out of my go-for-broke mood of decadence and saved me. For the two months of August and September in the second year of Taishō, I stayed at the Shimizu-ya in Kamikōchi, Shinshu, and made fifty to sixty oil paintings for the Seikatsusha's exhibition that I held with Kishida Ryusei, Kimura Sohachi, and others at the Venus Club in Kanda that fall.

In those days, anybody who wanted to go to Kamikōchi used to start from Shimajima, go through Iwanadome, and over the Tokugō Pass; it was quite a distance. During that summer, staying in the same inn were Kubota Utsubo and Ibaragi Inokichi, as well as Mr and Mrs Weston who had just come to climb Hodaka.


As September began, Chieko came to visit me with painting materials. When notified of this, I went over the Tokugō Pass to meet her at Iwanadome. Leaving her luggage to her guide, she had climbed lightly dressed. The mountain people were surprised at what a good walker she was. I guided her, again crossing the Tokugō Pass, this time with her, to Shimizu-ya.

Her joy at the scenery in Kamikōchi was great. From then on we walked around, making drawings, with me carrying our art supplies on my shoulders. At the time she appeared to have some minor problem with her pleurae, but while on the mountains it didn't develop into anything serious. It was then that I saw her paintings for the first time. She had a considerably subjective view of nature that was in a way unique, and I thought that it would be interesting if she grew to be great.


I painted everything I observed: Hodaka, Myōjin, Yaketake, Kasumizawa, Roppyakutake, the Azusa River. Even in her sickbed in later years Chieko would look at one of the self-portraits I did at the time. Once the Westons asked me if Chieko was my younger sister or my wife. When I said she was a friend of mine, they smiled with some incredulity.


If the Westons and the Takamuras had sought to change the subject, they might have talked about the bulls. In those days, cattle and horses were grazed at Kamikōchi over the summer. In The Playground of the Far East, Walter Weston describes how he and Mrs Weston met a "fierce monster" during their evening walk, which they escaped only by dashing for cover in different directions. Something similar happened to the Takamuras. The incident is recorded in one of the Chieko poems:

Ah, you are so frightened because
You saw what just passed
Like a spectre,
thundering through those black pines,
an avalanche in this zone of deep silence,
now completely gone,
that cattle herd on a mad run....

Soon, unfortunately, the couple had more to worry about than stampeding cows. Kōtarō takes up the story again:

About that time, with the headline "Love on the Mountain", a newspaper in Tokyo wrote with exaggeration about the two of us in Kamikōchi. It had probably expanded on a rumor from someone who had gone down the mountain. The article again grated on the nerves of our families.

On the first of October all of us on the mountain went down to Shimajima. The magnificence of the yellow leaves of the katsura trees that filled the bosom of the mountain at the Tokugō Pass was unforgettable. Chieko, too, often recalled it and talked about it.

The newspaper article worried Takamura’s parents, with the result that, a year later, he asked them to let him marry Chieko. This they did, allowing the couple to set up a household in Takamura's atelier. And after that, he records, "for a very long stretch of time we lived in poverty".

A brief history of imbecility: poetry and prose of Takamura Kōtarō, translated by Hiroaki Sato, University of Hawaii Press. All quotations in italics are translations by Hiroaki Sato.

Photos of the bridge and the horses grazing at Kamikochi are by courtesy of the Chubu Regional Forestry Office.
Posted by Project Hyakumeizan at 8:26 PM 2 comments: