The accident in “And then”

Few would argue that Natsume Sōseki (1867-1916) was greatly into extreme sports. So it’s all the more surprising to happen on a reference to modern alpinism in his novel Sore kara (ably translated as And then by Norma Moore Field). This occurs in Chapter XV, when Daisuke, a typically perplexed and troubled Sōseki hero, is leafing through a “certain popular foreign magazine”:

In one number, he had come across an article entitled "Mountain Accidents" and had been alarmed. The article recounted the injuries and mishaps that befell those adventurers who crawled up high mountains. There was a story of a climber lost in an avalanche whose bones appeared forty years later on the tip of a glacier; another described the plight of four adventurers who, about to pass a flat, vertical rock that stood halfway up the side of a peak, had piled one on top of the other like monkeys; but just as the highest was about to reach for the tip of the rock, it had crumbled, the rope had broken, and the three, doubled one upon the other, had plunged headlong past the fourth into the abyss. In the midst of these accounts were inserted several illustrations of human beings glued like bats to a mountainside as sheer as a brick wall. Daisuke, imagining the wide sky and distant valleys that lay beyond the white space beside the precipitous cliffs, could not help re-experiencing the dizziness brought on by terror.

On reading this account, Daisuke reflects that “in the world of morality, he stood on the same ground as those climbers”. At the same time, he is unwilling or unable to break off the budding liaison with a friend’s wife that is leading him towards moral and social destruction. For the fate that Sōseki has in store for his hero will be every bit as annihilating as the accident that befell the “four adventurers” in the fictional magazine.

Or was that magazine really fictional? Except for the number of people involved, the accident it describes closely resembles the one in August 1899 that ended the career of the English rock-climbing pioneer Owen Glynne Jones (below) and three guides on the Ferpècle Arête of the Dent Blanche.

In that notorious episode, the lead guide tried to surmount a rocky obstacle by standing on an ice-axe held firm by his colleagues. When he slipped, he pulled Jones and two other guides to their deaths. The fifth member of the party, a Mr F W Hill, survived only because the rope joining him to the others snapped under the strain. A detailed post on OG Jones’s life and death can be found on Summitpost.

Could Sōseki have heard of this accident? The dates seem to work. In 1901, only a few years after the Dent Blanche disaster, he was sent to England on a Japanese government scholarship to improve his knowledge of English literature. During his stay, Sōseki unquestionably fulfilled his mandate, spending most of his time closeted in libraries or his lodgings, reading voraciously. It seems possible that he also stumbled across a magazine – but which one? – containing an account of Dent Blanche accident.

Sōseki’s English sojourn was the making of his career. Returning to Japan, he took up an appointment at the First National College in Tokyo and later became the professor of English literature at Tokyo Imperial University. Novels started to tumble out at a rate of one a year. Yet his memories of England were more bitter than sweet: ”The two years I spent in London were the most unpleasant in my life. Among English gentlemen I lived in misery, like a poor dog that had strayed among a pack of wolves.”

A few of Sōseki’s English friends did their best to alleviate his misery. His last set of landladies, the Leale sisters of Clapham, “successfully urged him to get out more and take up cycling”, or so Wikipedia asserts. Had the sisters been a bit more successful, one could imagine a kind of alternative history in which Sōseki parlays his newfound cycling fitness into a general enthusiasm for the outdoors, returning to Japan just in time to join the nascent Japanese Alpine Club, as quite a few other contemporary writers would do.

You know, it might almost have happened – in Sōseki’s Kusamakura, published in 1906, the year after the Japanese Alpine Club was founded, the narrator opens his account walking down a spring mountainside towards a remote hot spring village. We learn that he is a painter on a hiking tour, not unlike the real-life artists Nakamura Seitarō and Ibaraki Inokichi, who both became keen Sangakukai men.

At least one caution is in order here. A novel's narrator is not necessarily the same sort of person as his author. Thus, although the protagonist of Kusamakura may have been a likely candidate for Japan's new alpine club, this doesn't mean that his creator ever considered joining. Come to think about it, it’s a mercy that Sōseki didn’t sign up as a pioneer alpinist. Japanese literature would in all probability be much the poorer for it.
Posted by Project Hyakumeizan at 8:38 PM No comments:

October 20: with only the afternoon to spare, we need a low mountain. Monju-san, a few kilometres south of Fukui, fits the bill. It has just one metre of altitude for each day in the year. Height, though, is not the same as stature, as Fukada Kyūya points out in the afterword to his most famous book. For this is a mountain that no meizanologist should miss. 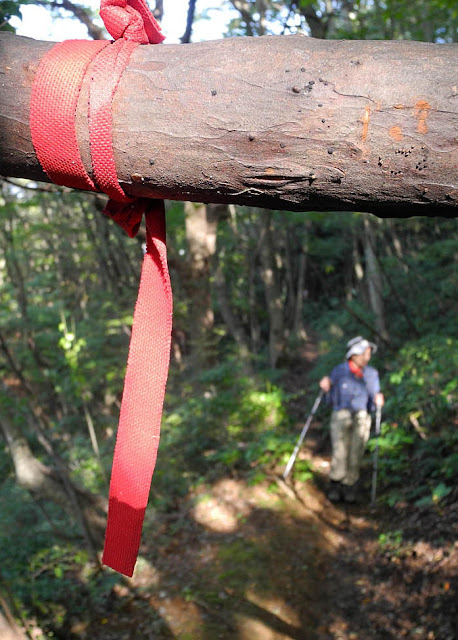 Monju was “opened” by Monk Taichō himself, in the first year of Yōrō (717). Presumably, he was warming up for his pioneering excursion to Hakusan in the same year – the climb that Fukada somewhat adventurously identifies as Japan’s first high-mountain ascent. Actually, it is surprising that Taichō didn’t climb Monju sooner, since he was born in Asōzu, the village at its foot, more than three decades earlier. 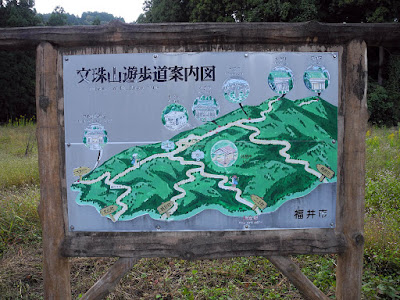 Be that as it may, Monju’s Meizan status cannot be disputed. Like any self-respecting sacred mountain, it has three peaks, identified on the hiking map as Little Monju, Big Monju and the Inner Sanctuary (Oku-no-in). But the first and last ones are known additionally as Murodō and Ōnanji, names that also adorn the equivalent places on Hakusan and Tateyama. This suggests that people once saw Monju in the same terms as those two other sacred peaks. 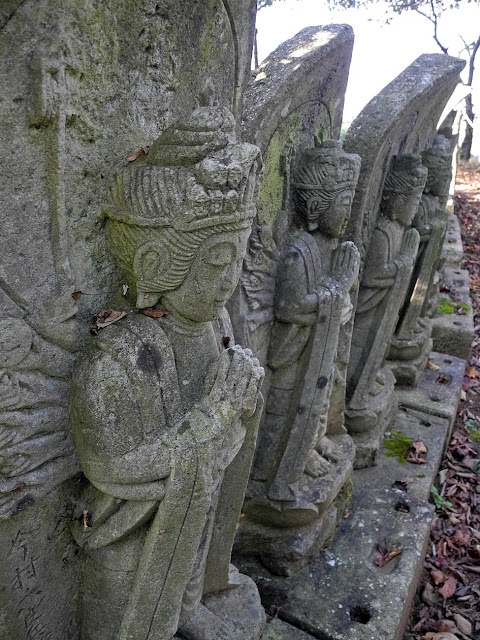 Some centuries after Taichō, Monk Saigyō, the all-terrain poet of the Heian era, distinguished the mountain in a deft tanka:

In Koshi, over yonder
Is it Fuji there, I wonder?
So bright the daybreak glows
On Tsunohara-Monju’s snows 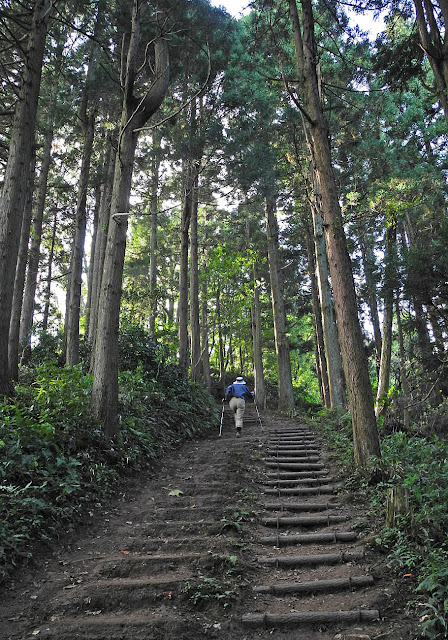 Indeed, you can still climb Monju via a “Tsunohara course”. And it may be that the mountain really does look like Mt Fuji from that western aspect. Though, when we step out of the Sensei’s van at the foot of the normal route, it is a straggling ridge that rises above us rather than a shapely cone. 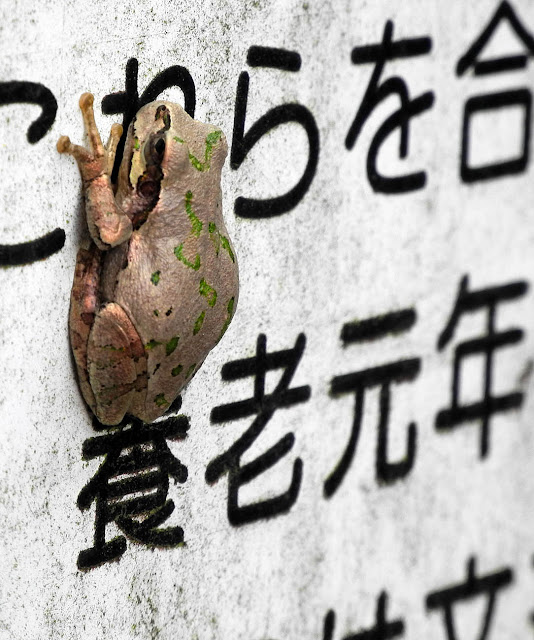 In the carpark, we brush up on Monju’s history from a signboard. On its battered paintwork, a tiny frog is contemplating a vertical direttissima. A few minutes into the woods, we encounter a sign warning that bears might leap out at us. The Sensei is unfazed, but I deploy her bear-bell all the same. It’s always best to err on the safe side when dealing with these ursine types.

In fact, the trail presents a greater hazard – it is broad but slippery, the mud polished to a mirror glaze by the passage of a millennium’s worth of feet. About half-way up our hill, the Sensei tires of it and launches into the woods on our right. Trust me, she says, there really is a path. So, chiming rhythmically, we start our own direttissima across the mountain’s north face. A strip of red tape marks the way for those who would brave this route in mid-winter. 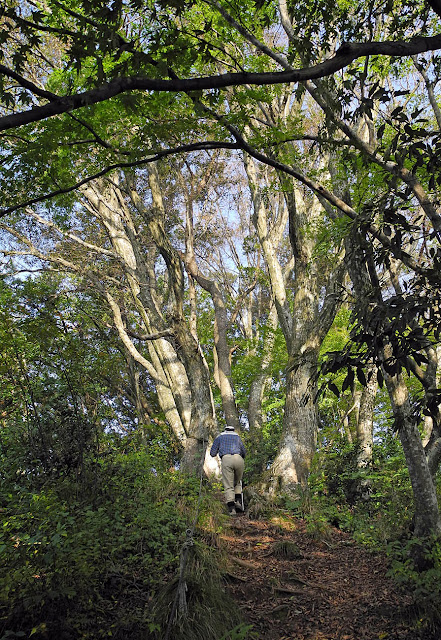 In front of us, the leaf litter rustles as something leaps for cover. Fortunately, it is an order of magnitude or two smaller than a bear. Instead, we find a fat brown frog palpitating by the side of the track– pregnant with eggs, says the Sensei, who knows about country things. Perhaps it is taking the warm weather for the start of spring. 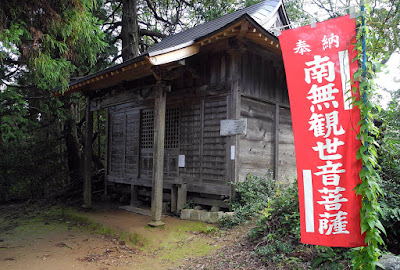 We come up on the ridge close to a pavilion that houses a Kannon, or so at least a gaudy banner suggests. Nearby is a tree wearing a sacred rope, suggesting that nobody ever tried very hard to disentwine Buddhism and Shintoism here, as they did on Ochi-san. Even today, the Sensei tells me, it is a temple at the foot of the mountain that looks after the shrines up here. 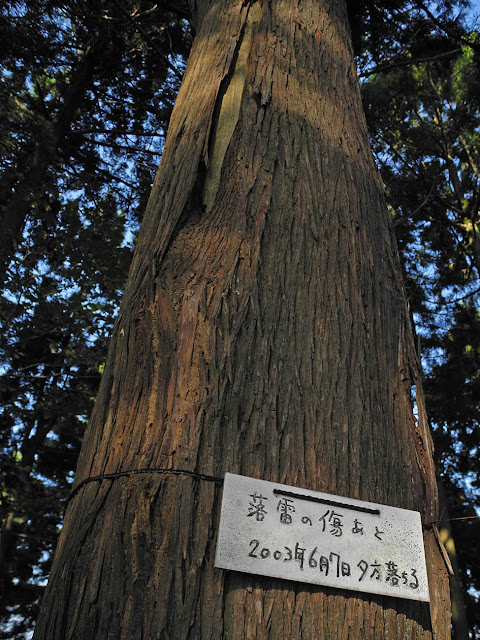 High on the ridge, we pass a lightning-scarred tree. Monju, one of the four great Bodhisattva (Bosatsu), is sometimes portrayed with a thunderbolt (vajra) in his hand. He seems to toss them down with considerable liberality on his namesake mountain. 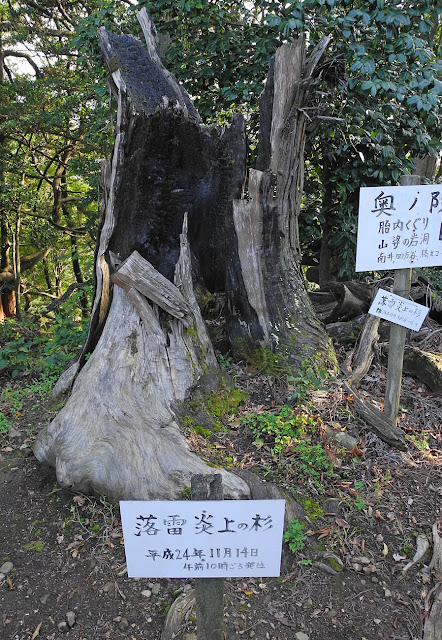 A few minutes later, on the summit itself, we see a tree-stump that a lightning strike has completely burned out. Probably one should avoid Monju during thunderstorms.

Below the Oku-no-in, the path leads into a rift between the two halves of a gigantic boulder. You should only pass through if you have a clear conscience. No impure thoughts now, says the Sensei. Or the rocks will clap together and swallow you up. 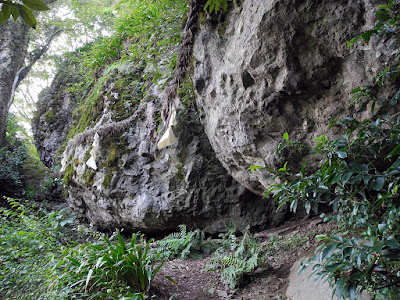 I hesitate for a moment. I mean, suppose there were an earthquake. Then, surviving the passage unscathed, we circle back through the woods towards the middle peak. 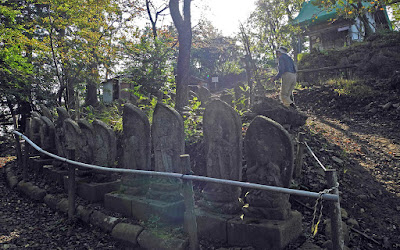 Guarded by a row of jizō statues, the summit shrine is silvery with age. Its timbers must have looked fresher when Fukada Kyūya, then in his fourth year at Fukui Middle School, came up here with three companions on November 27, 1919. Another noticeboard gives us these details. 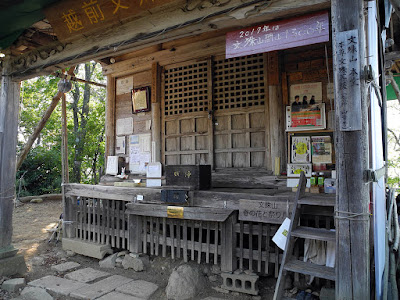 As fellow students had helped to clear the path a year or two before, Fukada and his friends might have felt a proprietary interest in Monju-san. At any rate, all four felt entitled to inscribe their names on the shrine.


Ninety-nine years later, I look here and there for the graffiti, without success – sorry, says the Sensei, they carved their names inside the shrine, and you can only see them when the doors are opened for the annual festival. 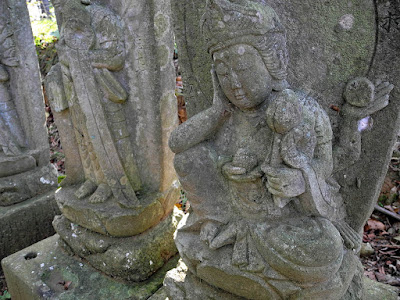 The view makes up for any disappointment. For its height, Monju must afford one of the best all-round vistas in the prefecture. Through gaps in the trees, we look westwards to Ochi-san and the coastal hills. In the opposite direction, Hakusan and all those other famous mountains of Hokuriku loom through the haze. Mountains, as any meizanologist will testify, are places that let you see further.

Tomorrow, we would have to head back to the Big Slope. There were friends to meet and a flight to catch. We’d take the view from Monju with us, though. 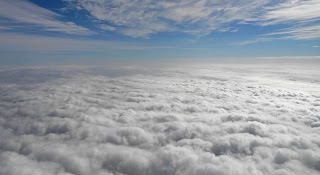