So that I have the clear sky overhead

Thanks to Japan's most famous mountain book, we know who Matsuura Takeshirō was. He was the explorer who journeyed through the wilds of Ezo (now Hokkaidō) between 1845 and 1858, laying the groundwork for the northern island's later development.

In Nihon Hyakumeizan, Matsuura first appears as a 27-year-old wanderer, composing a poem about Akan-dake (Chapter 4) on the day after climbing this shapely 1,503-metre volcano. A few pages later, he is responsible for the naming of Biei, a town close to Tokachi-dake (Chapter 7).

In alpinistic terms, Matsuura's greatest feat was the mid-winter ascent of Yōteizan (Chapter 9), a Fuji-like stratovolcano of 1,893 metres to the south of Sapporo. He set up a shrine at the mountain's foot on February 2, 1858 and then addressed himself to the ascent, which included an overnight bivouac in subzero conditions. We next run across Matsuura's trail in the Kansai region, where he pioneered a route up Ōdai-ga-hara-yama in 1885 (Chapter 90).

So that is what Matsuura did, at least in connection with mountains. But what inspired his ceaseless wanderings? To answer that question, we have to look beyond the pages of Nihon Hyakumeizan. Fortunately for English-speakers, the explorer's life was written up by the anthropologist Frederick Starr in a slim pamphlet published in 1916.

What follows is based on Starr's account, with added detail from three other sources (see references). Starr first heard of Matsuura when he visited Hokkaidō in 1904 "to secure a group of Ainu for the outdoor ethnologic exhibit of the Lousiana Purchase Exposition at St. Louis". It turned out that Matsuura's travel journals constituted one of the most authoritative sources of information on the Ainu at that time.


Matsuura Takeshirō was born at Kitanoe in Ise Province in February 1818. His father had studied literature under Motoori Norinaga - whose "national learning" provided the intellectual underpinnings for the Emperor's Restoration in 1868 - and Takeshirō embarked on a similar education when he was sent, at the age of thirteen, to the school of Hiramatsu Rakusai in Tsu.

From the age of seventeen, Matsuura began "a remarkable series of wanderings" that took him all over Honshū, calling on men of letters, visiting shrines and places of historic interest, and climbing "notable and famous peaks". But it was while serving as a monk in a Zen temple at Nagasaki - he was now twenty-one - that news reached him of Russian ships approaching Japan's northern territories. This seems to have awakened his interest in Ezo, as Japan's northern island was then known.

Getting there took several years. One preliminary was to pay his respects to the graves of his parents, who had died during his wanderings. Another was to visit the shrines of Ise. As Starr explains:

"He desired here to pay respect to the national deities and sacred shrines, but, as a shaven priest of Buddhism, might not do so. Here was exemplified one of the most curious characteristics of the man. Though he continued his daily prayers, morning and evening, through his life, after the Buddhist fashion, he placed national loyalty above his Buddhist fervor; abandoning the priesthood, he permitted his hair to grow, and performed the duties of filial piety and national respect at Ise."

A first attempt to cross the straits of Tsugaru was rebuffed by officialdom. So it wasn't until 1845 that Matsuura at last succeeded in getting passage to Ezo, where he travelled for seven months. On his second expedition, a year later, Takeshiro travelled as far as Karafuto (Sakhalin) and Cape Shiretoko before returning to Hakodate. 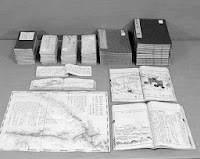 After his third journey, which took him to Kunashiri and Etorofu in the Chishima Islands, Matsuura started to assemble his observations into a series of reports. In the end, his writings on Ezo would fill thirty-five volumes. He also drew up maps. These were astonishingly accurate given that he had only a pocket compass and his own paces to measure directions and distances.

Partly as a result of these researches, the feudal government started to wake up to the northern island's strategic importance and appointed Matsuura as a kind of commissioner between 1855 and 1859. Although these duties took him to Ezo three more times, life as an official wasn't entirely to Matsuura's liking. When he left government service, he composed the following poem:

Laugh not, men of the world!
Though my house be small
My belly can store
All the mountains and rivers of Yezo.
For wealth and honours
I care not, as the years advance,
So that I have the clear sky overhead.

Matsuura's retirement from public service was temporary. In 1868, the new Meiji government appointed him judge at Hakodate. The following year, he became the 'development commissioner' for the northern island and submitted six proposals for its re-naming. These included Kaihokudō and Hokkaidō, which both included variations of the word Kai, the Ainu name for the island. In the end,  the government settled on Hokkaidō or "Northern Circuit". The name has stuck. In these years, Matsuura also helped with the transfer of the capital from Kyōto to Tōkyō, and served as adjutant to the governor of the new metropolitan region.

After again retiring from public life, Matsuura devoted himself to his personal interests. His house in Tōkyō become a centre for artists, poets, and men of affairs. He expressed his admiration for Sugawara no Michizane by dedicating a series of mirrors to shrines commemorating the Heian-era scholar official. And he made a yearly journey down the Tokaidō to visit his son in Ōsaka.

Mountains were not forgotten. Between 1885 and 1887, when Matsuura was almost seventy, he "opened" Ōdai-ga-hara-yama in Yamato Province, establishing shrines at seventy-five places around the wooded massif. As in Ezo, his aims were a mixture of practical and personal: he would follow in the footsteps of the semi-legendary mountain mystic, En no Gyōja, and overcome local superstitions - at the time, local people believed that a giant serpent haunted the mountaintop. At the same time, he would discover new tracts of arable land and find himself "a burial place in a spot beautiful by nature".


Matsuura was not greatly interested in money; he "desired neither to have a fortune in his life-time, nor to leave money at his death". A man didn't need much; he'd accomplished his life's work in Ezo on the slenderest of means. About two years before he died, he had the idea of building a small room of one-mat size. There had already been a house in Japan measuring one and one-half mats, he said, but never one of just a single mat.

The one-mat room was built onto Matsuura's house in Kanda. His friends contributed pieces of timber or stone from various famous and historic buildings. When it was finished, in late 1886, the little structure seemed to sum up Japan's cultural heritage - it included wood from the temple of Shi-tennō-ji in Osaka, a board from the library of the Kofuku-ji, a post from the Togetsu bridge in Kyoto and scores of other precious relics.


Matsuura never intended the one-mat room to survive him. As Fukada Kyūya records in Nihon Hyakumeizan, "In his latter years, he had built himself a tiny but elegant retreat. To an account of why he had built the little scriptorium he added the request that, when he died, its materials should become his funeral pyre and the ashes scattered on Ōdai-ga-hara-yama." (Nihon Hyakumeizan, Chapter 90)

That account is accurate as far as it goes. What Fukada doesn't tell us is that Matsuura's wishes were disregarded. As a result, and after three moves away from central Tokyo, the one-mat room can still be seen today, as part of the Taizansō villa on the grounds of International Christian University in Mitaka, Tokyo. That is one tribute to Matsuura's memory. Others include a Memorial Museum in Matsusaka City, Mie Prefecture, and - as might be expected - a stele on Ōdai-ga-hara-yama.


Yet the monument that Fukada Kyūya chooses to highlight in Nihon Hyakumeizan is a "small and inconspicuous" bronze statue that graces the front court of a public hall on a hill top in Kushiro, Hokkaidō. It shows Matsuura, writing brush in one hand and notebook in the other, gazing out in the direction of Akan-dake, as if mulling over the lines he has just composed to mark his ascent:

Fukada Kyūya, Nihon Hyakumeizan, in a forthcoming translation as One hundred mountains of Japan.

Should the Senkaku Islands be designated as a nature reserve?

Seeing that they've been in the news, I Google Earth'd over to the Senkaku (or Diaoyu) Islands. Not, of course, with the aim of stoking controversy, but just to see if there was any climbing potential. Which is rather poor, I'm sorry to report. Although the islets rise with promising steepness out of the ocean, the cliffs look loose and vegetated. 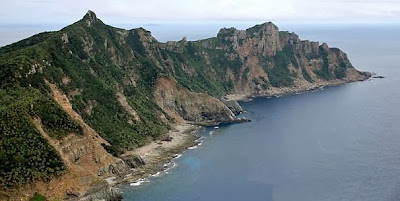 Besides, would-be climbers might disturb the short-tailed albatrosses (Phoebastria albatrus) that live there. In Japanese, this engaging bird is known as the "ahō-dori" ('foolish fowl'), a name that refers to its habit of letting people walk right up to it. In return for this trust in human nature, it was hunted almost to extinction in the nineteenth century. 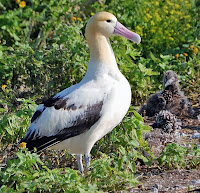 Since hunting was banned, the global population has recovered to a few thousand or so - about 2,000 birds on Torishima, an island in the Izu chain, and a few hundred more on Minami-kojima, one of the Senkaku group.

Japan's Agency for Cultural Affairs long ago declared Torishima and the "ahō-dori" itself to be 'natural monuments'. Surprisingly, though, this distinction has so far eluded Minami-kojima, the bird's only other breeding ground. Now there's an idea. Perhaps it's time that the Senkaku Islands were designated a special natural monument or even a national park ...
Posted by Project Hyakumeizan at 6:35 PM 3 comments: