A conference on Japan’s alpine culture is due to convene on November 14 and 21, both Sundays. Entitled The Alpine Archipelago: Surveying Japan from the Timberline, this is probably the first meizanological conference ever to take place outside Japan.

The organisers, David Fedman and Jon Pitt, both of UC Irvine, outline the programme as follows:

Taking a timberline view of Japanese society, this conference explores the place of mountains in Japanese history, literature, film, religion, and popular culture. It does so in the same spirit as Fukada Kyūya's One Hundred Mountains of Japan (Nihon Hyakumeizan): by offering detailed portraits of individual mountain landscapes and the communities in which they are embedded. Each speaker will guide us to a particular peak, showcasing not just the wide range of alpine environments in Japan but the host of methodological approaches to studying the upland areas that make up the better part of the archipelago.

Absurd, it seemed.
Yes, we got the e-mail. A late-season attempt on the NE Pillar ...
But, on Friday, surely the phone would ring, and the gravelly voice would ask about tomorrow. And then, before dawn, we'd be on our way again in the battered white Volkswagen – which, incredibly, was older than my weather-beaten Subaru.

Old cars give you something to talk about: how to keep them going; the iniquities of Swiss auto repair shops; hassles at work; the key points all driven home with a broad wink and a grin in your direction. Right, but how about keeping one eye on the road, I wanted to ask – but, still, we'd get there in the end. 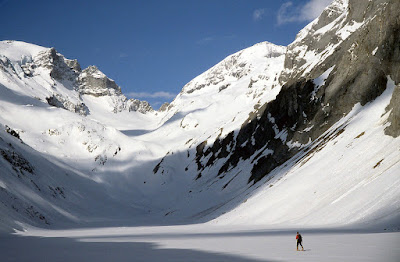 Like the time we went to the Bifertenstock, a great white whale of a mountain. The cold winter air floods in and we're unloading skis and gear all over the road. This morning, maybe in March, we’ve parked in Brigels, a village in the Grisons, and there are three of us. I was the one who suggested the mountain but the plan is now being prosecuted at a different level of intensity. We even set off without a coffee.

Now the sun is up and Alpinist S. is out ahead on the Val Frisal, a small outwash plain. The photo shows a small figure, red-jacketed, already half-way to the glacier. The sky is blue and there's just a wisp of cloud curling over the ridge. The image shows how misleading both photos and weather can be, because the clouds soon clamp down, an ominous-looking serac looms above, and the icy slope curves down and away below our ski-crampons.

We're on edge here: Alpinist S. wants to go on, I'm for turning, and Alpinist A. is hovering. Now we can hardly see each other on the rope. The weather casts its vote, and it really is time to point those skis downhill.

These photos are getting to be a genre. Here's another showing the tiny red-jacketed figure, far ahead, but this time it's the Blinnenhorn in the background, the shadows borrowing their icy blue from the sky overhead. Deep blue shadows, blue-washed snow, a lemon-slice moon recumbent in the cold blue sky. Not another soul around. Somebody else’s verses float to mind:

"We are the Pilgrims, master; we shall go
Always a little further: it may be
Beyond the last blue mountain barred with snow… " 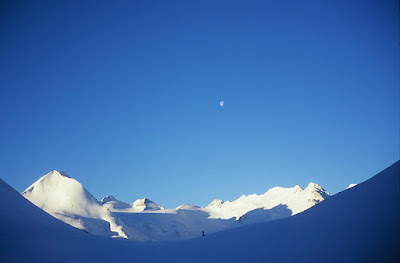 Poems, as well as photos, can mislead. The red-jacketed figure is waiting – he always waits for slower companions and patiently too – because two ways lead there. There's a high road and a low one, and Alpinist S. took the high one. The high line was faster (another giant wink when we meet), hence the wait, but it led over a steep and icy slope. The low road, my choice, seemed safer, but you had to take off your skis and flounder down a gully choked and primed with powder snow.

Another hour or so, and we're underneath the summit ridge. The wind is cutting, the ridge is icy, but we've left crampons and axes behind to save weight. That's enough for me; that ridge is crampon territory or none, but for Alpinist S., it's the top that counts. "I'll have a look," he says with that wink. He starts off up the ridge, propped on ski-sticks against the wind, while I fight off hypothermia. An hour or so later, we're both hypothermic. Alpinist S. got his summit and we're skiing back over the glacier.

We're not home yet. Even Alpinist S. doesn't want to repeat the icy traverse, so he asks about my snow gully. "It's OK," I say. But it's not. That gully is a bomb waiting to go off. The powder's too deep, too loose to walk up; you'd sink to the waist. Without comment, Alpinist S. sets off – it's difficult, tense work laying a ski-track in that white mine-field smother. But there's no other way. At the top, there are no recriminations. There are none on our tours.

Another March, we're skiing up Piz Platta, another unheard-of mountain in the Grisons, and, needless to say, from the steep side. This time Alpinist S. isn't out ahead, but only because he has a cold. As the snow clouds dissipate, the air above us glitters with diamond dust. Another crew goes off-route and has to climb a rock step in ski-boots but we find the right way, across a ledge into the summit gully, thinking instead of floundering. We have a doctor of science in the lead, you see.
At the top is a massive summit cross, two great beams of iron-clenched pine. The golden light comes grazing across the rippled ridges. If we don't want a night epic, we'd better be on our way. The couloir is steep, but Alpinist S. strolls down it like a city street. I'm more circumspect. Some might call this steep.
The uncompromising ethic might scare you. Or it can save your bacon. The mountains are already snowed in and it's a grey autumn day. We're making the most of it on the limestone flutings of a crag near Zurich. Left to myself, I'd take the easy route up. But you need the practice, don't you, Alpinist S. says (with another of those mighty winks), so we end up on the V+ territory on the right, rock shoes scarting off the embedded oyster fossils. Alpinist S. is doing the leading, so it's his call. It's steep, one might say.
We're half-way up when there's a rumble on the left. Two boulders – head-sized – are bouncing down the easy route. People start shouting; a girl's been hit on the hand. It takes twenty minutes for a helicopter to come in, put a skid on the rock terrace and take her aboard.
Other parties abseil off. Their rats have probably had enough for today. Anyway, it's late. But we haven't finished the route. This time, I don't even suggest giving up. Waste of breath. Alpinist S. confronts the overhang and subdues it. When we get back to the packs, everyone else has gone and the chair-lift down the meadows stopped running hours ago. We walk down to the weather-beaten Volkswagen in the dusk.

Of course, we wouldn't be setting out in the VW any more. Its last trip is to the Ringelspitz, on a cold November weekend. The ground is frozen hard but there's still no snow. At dawn, on our way to the ridge, we surprise a herd of chamoix. Better not to make them run, says Alpinist S., or they'll burn up their fat before the winter. On the way home in the car, a Ferrari-like roar bursts out from below decks. The exhaust has fallen off. OK, that's it for the Golf, says Alpinist S., after getting out to check: I'm taking it to the scrapyard. No sentiment for old cars.

Another year, and we've both survived the summer. And then the e-mail arrives, on a bland autumn morning. At first, it seems absurd that the phone won't ring on Friday, that the old cars won't be lurching out of their parking bays, that we won't be climbing into the freezing fog or skiing down in the dark, Alpinist S. waiting for us in the distance. Now it really does start to sink in, that he won't be waiting. This time, he really did go on too far ahead.
Posted by Project Hyakumeizan at 9:25 PM 1 comment: