It was a late summer weekend in Japan's Northern Alps, perhaps the last before the snow came down. We were marching down the wooded path towards Kamikochi when we overtook the monks.

Alerted by the clink of climbing hardware in our packs, one of them turned as we approached. It was an unforgettable moment. To top the ensemble of his black vestments, rosary, and straw sandals, he sported a razor-sharp pair of blade sunglasses.

The monks and the mountaineers fell to talking. We had just done a route in Takidani. They had been singing sutras to the memory of Monk Banryū atop Yari-ga-take. The memorial service is performed without fail every year, the monks said. 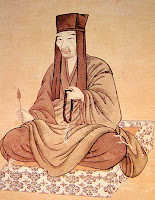 Fukada Kyūya would have approved: “Banryū was a great alpinist. His achievements are recorded in the masterly biography by Hokari Misuo, but his role as a pioneer of the Northern Alps deserves to be known to a wider public,” he writes in “One Hundred Mountains of Japan” (Nihon Hyakumeizan). The monk appears twice in Fukada’s book, in the Kasa-ga-dake and Yari-ga-take chapters.

Monks and religious mystics opened up many of Japan’s greater mountains and Banryū was the last great representative of that tradition. Indeed, a popular history of Japanese mountaineering elevates him to a pantheon of just seven climbing monks – the others are En-no-gyōja, said to have ascended Fuji in the seventh century; Taichō, the eighth-century pioneer of Hakusan; the roughly contemporaneous Jikō of Tateyama; Shōdō (735-817), who first climbed Nantai; Hasegawa Kakugyō (1541-1648), founder of a sect centred on Mt Fuji; and Fukan (1731-1802), who did the same for Ontake.

Banryū was born in Ōyama-machi in what is now Toyama Prefecture, in 1782. By coincidence, it was in the same year, the second of Tenmei, that Monk Nan'ei from Sōyuji temple in nearby Takayama made the first authenticated ascent of Kasa-ga-dake. Forty years later, Banryū followed in Nan'ei’s footsteps, as Fukada records in Hyakumeizan: 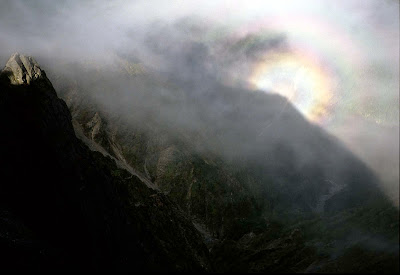 After reaching the top in June of the sixth year of Bunsei (1823), he persuaded some local people to build a path. On August 5 the same year, eighteen people with Banryū at their head climbed the mountain again. As they watched a bright halo floating in the clouds, Buddha the Merciful appeared to them three times, causing them to weep tears of adoration while they paid their devotions. Banryū left a detailed account of this episode in his Record of the re-dedication of Katagadake. The following year, on August 5, Banryū led sixty-six people to the summit in honour of Buddha Amida. Again, the halo in the clouds was seen several times. It was on this occasion also that Banryū saw the noble form of distant Yari-ga-take and resolved to climb it, later achieving the mountain's first ascent.

The bright halo mentioned in this account must be the brockenspectre. This is a phenomenon caused by optical scattering that is often seen in the Japanese mountains. There’s a good write-up and some excellent photos in a blog post by CJW. The brocken in the photo above was seen on Kita-Hodaka, a 3000-metre peak just across the valley from Kasa-ga-dake.

Three years after the Kasa ascent, Banryū made his first attempt on Yari. Again, the story is taken up in Hyakumeizan:

Banryū came to the village of Ogura in Azumi-gun of Shinano province and put up there with the headman, Nakata Kyūzaemon. Nakata agreed to the monk's request and they forthwith started to prepare for the journey. With Nakata's brother-in-law, Matajūrō, who knew the mountains, they set out for Yari. Crossing Ōtaki-yama and Chō-ga-dake, they descended into Kami-kōchi, then followed the Azusa river up to a cave in Yari-sawa (now known as the Bōzu Iwagoya or Monk's Cave). Making this their base, they made a foray towards Yari itself, with Banryū chanting the nenbutsu as he went. However, that year they did no more than spy out the ground.

Undaunted, pious Banryū spent the next two years travelling through the provinces and collecting alms until he was ready once more to incline his staff towards Yari. This time, he bore on his back statues of the Amida Nyorai, Kannon Bosatsu, and Monju Bosatsu. Committing himself to their protection, he finally attained the summit of Yari-ga-take on July 28 of the eleventh year of Bunsei (1828). Having achieved his aim, he set up the three statues on the summit and sent up an oration of thanks to the Buddha for his mercies.

Banryū returned twice more to Yari, improved the path there, cleared the summit, and encouraged his disciples to make the ascent. He would also have safeguarded the ascent of the rocky spire with iron chains but for certain villagers who prevented him because, at the height of the Tempo Famine (1830-34), they blamed his mountain-climbing for their bad harvests. Only when better times returned did they grant his wish and allow chains on Yari … 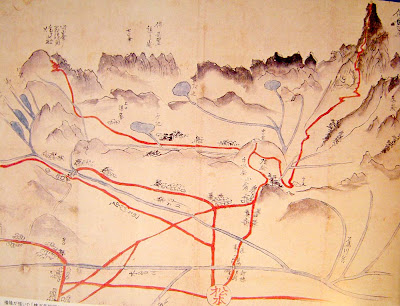 There’s more to the story of Banryū, as we discovered on a ski-tour one Golden Week. On our way towards the west ridge of Yari, bad weather detained us at the Sugoroku Hut. Fortunately, our host, Koike Hisomu, maintained a goodly library for the use of his guests. As the spring storm buffeted the hut’s timbers, I lit on a book by Hokari Misuo and read with fascination about the monk’s third visit to Yari-ga-take.

Five years had passed since he first reached the summit and, in the meantime, hard times had fallen on the surrounding region. In August 1835, the year after the Tempo famine ended, Banryū set out for Yari again, hoping to make the ascent route easier for future pilgrims. He made his way up to the familiar cave in Yari-sawa together with Nakata Matajūrō, who had stocked it with rice, flour and a cooking pot. Then Nakata left the monk to his devotions. 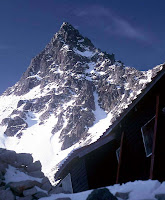 Once more, Banryū was alone with Yari-ga-take. He meditated, waited for a fine day, climbed to the summit, and perhaps again saw the mystical, Buddha-like halo in the clouds. But August was now drawing to a close. Frost covered the ground every morning and the monk was now melting snow in order to cook his rice or barley. Intent on his rites and sutras, the monk paid no heed to the looming onset of winter.

Meanwhile, the five disciples whom Banryū had left in the valley were anxious. They broached their fears to Matajūrō, who immediately set off up the mountain. Arriving at the cave, he found the ground covered with new snow and Banryū debilitated by seventeen days of austerities. Sometimes carrying, sometimes dragging his friend, Matajūrō succeeded in bringing him down to Ogura in the last stages of exhaustion. He wanted to summon a doctor but Banryū refused, preferring to rely on the Nembutsu. In the end, he lost two toes on his right foot to frostbite.

Banryū stands out in several ways. He brought the tradition of mountain asceticism to the highest, most difficult peaks. And, unlike the other pioneers mentioned above, who belonged to more esoteric schools, he adhered to the popular Jōdo (Pure Land) sect of Buddhism, with its emphasis on everyday good works and saving others. Although a layman, Nakata Matajūrō was also faithful to Jōdo principles. He selflessly supported Banryū and carried out Japan’s first high-altitude mountain rescue. He should be remembered too.

A great account, and another beautiful translation, thoroughly enjoyed reading it. I had no idea that Banryu's final ascent was such an adventure. It seems rather unfair that Walter Weston casts such a long shadow over the history of early Japanese climbing when one reads accounts such as Banryu's (and Matsuura's).

I have a serious map fetish; the one above is a beauty. Banryu was clearly a talented artist and topographer as well as an exemplary alpinist. Is it from one of the books in the references?

It was fascinating, thank you, to learn about the early climbs, and surprising to hear that modern-day monks still ascend in basically the same clothing. Straw sandals up Yari?

I was once told that the jizo found on many mountains were carried by labourers on behalf of wealthy merchants who wished to gain good karma, but it seems that the true believers did the work themselves. And I've always wondered who carried up those enormous iron swords that one can see impaled into large rocks, such as on Kaikomagadake, and when. Any ideas?

Chris and Hanameizan - thanks for your kind comments. As for the question whether Walter Weston looms too large over Japanese mountaineering history, that's the case only in English sources. In Hyakumeizan, I'd say he gets his due recognition - mentioned and quoted in several places, along with other foreign mountaineers - but his role isn't exaggerated.

As for the maps and image of Banryu, these are from the Taiyo Bessatsu book. And, yes, the map is apparently by Banryu himself.

Hanameizan: not sure who carried those great iron swords up the mountains. Fukada doesn't relate. Maybe one for your blog? By the way - it's also a mystery what happened to Banryu's images. Nobody has seen them in later times - perhaps they were avalanched off the top of Yari in a winter storm....

Everytime I do a search on Google for this site I find a different gem of a post to read. When the book is completed, I hope it will be more than just a translation. You have added so much extra interesting information in your posts that anyone truly interested in reading about the human history of the Japan Alps would be enthralled to find all you have written here.

I had been considering including a summary of the mountaineering history of the Alps in my project but I feel it would completely pale against the rich cornucopia of delectable morsels provided here. I think I will stick to the natural history and just add a reference to your book and blog.

Someday, I'd love to read every post on this blog from first to latest.