Showering down, shredded leaves and powder snow told me the pitch was difficult. The rope crept through my hands hesitantly and with long pauses. Above, Yamada-san was prising each foot of progress from a minefield rake of snow-covered rock and panda grass.

The day had started well; we’d yomped up an icy gully, then attacked the foot of the ridge, crampons sparking in the gloom as they bit into the frozen lava. Then we lost the plot. I avoided a frail catenary of snow on the ridge, only to be suckered into a wall on the side of the crest.

Now Yamada was paying for that mistake. If it had been a mistake, for neither us could say whether we were off-route or on. Time was no longer on our side: while our backs were turned, the winter sun had vaulted over the mountain’s summit. Now it was plummeting towards the horizon. Even in the sunlight, the air was bitterly cold and I shivered on the belay stance.

Yatsu-ga-dake has always been a place to practise austerities. In former times, monks and mystics made a mandala of this crumbling stratovolcano. For them, its peaks and ridges enshrined a whole pantheon of avatars, buddhas, and mountain deities. Echoes of their sutras linger in Gongen-dake, Jizo Col, Amida-dake, Kannon-daira, Sekison Ridge and the other place names that map out a moral universe.

There is even a Pilgrim's Hut, but, these days, it overflows with fibrepile-clad hikers and climbers. Yatsu has become a seminary of winter mountaineering. That's why were here, of course. First, we made forays onto the snowy summits. Then we graduated onto frozen waterfalls, ice-gullies, and mixed rock-and-snow ridges. Right now, though, I was wondering if we'd gone a ridge too far. If Yamada was struggling, the pitch was difficult. 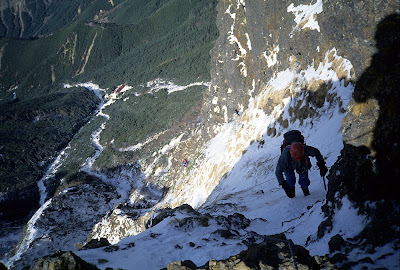 I eased the rope out another foot or two. Strange are the thoughts that come to mind on a belay ledge. Like a bubble from the abyss, a passage from the war novel “Das Boot” floated up. After the submarine is depth-charged to the seabed, the narrator tells himself, “After all, this is exactly what you wanted. You were up to your neck in easy living. You wanted to try something heroic for a change. ‘To stand for once before the ineluctable…’ You got drunk on it all. ‘… where no mother cares for us, no woman crosses our path, where only reality reigns, grim in all its majesty…’ Well, this is it, this is reality.”

In just one respect, our plight did match that of Lothar-Guenter Buchheim’s crew: the only way out was up. "Kakuho!" drifted down from above. At last, Yamada had reached a ledge. "Just watch out when you climb,” he added, "the belay's so-so." That I could believe: we hadn’t found a solid one all day. Retreat was impossible. I started up the face, crampons scraping for the holds lurking beneath the snow and panda grass.

Every time I reached up, the snow that Yamada hadn't dislodged cascaded down my sleeves. Well, this was it, this was reality, uncomfortable in all its tiresomeness. Half-way up, I found a solitary sling wrapped around a creeping pine root. It was the only point of running protection in the whole pitch and, not for the first time, I mentally saluted the leader's nerve.

Up to now, I'd thought of Yatsu-ga-dake as a courteous mountain. Courtesy, in this sense, meant that the mountain keeps its hazards in plain view. The risks involved in climbing on Yatsu are obvious. In this, it is unlike Mt Fuji, for example, whose facile, open snow slopes lure people into fatal slips every year. And the weather here is less fickle than in the Northern Alps, where snowstorms blow up out of nowhere.

Courteous doesn't mean indulgent, though. If you go out into snow-laden gullies when the warm haru-ichiban wind blows, expect to be avalanched. If you forget to clip into the belay atop the first pitch of the Shodoshin Crack, you will fall the distance. We'd witnessed such accidents. Even the most courteous of mountains drives home its precepts with rigour.

It was Yatsu-ga-dake that dealt to Fukada Kyūya, the Nihon Hyakumeizan author, his first bitter lesson on the dark side of mountaineering. Described in “One Hundred Mountains of Japan”, the episode took place just a month or so after Fukada had entered Tokyo University to study literature:

We stayed at Akadake-Kōsen hut, two or three years after it had been built, and next day, climbed to the summit. Then we picked our way along the rocky ridge over Yoko-dake to the broad, grassy top of Iō-dake. The difficulties were now over, I thought, and gave a sigh of relief. But I was much mistaken. A moment later, my companion fell to his death. Even now, when I see the steep wall on the north side of Iō-dake where he met his end, hard by Umi-no-kuchi, the pity of it strikes me anew. 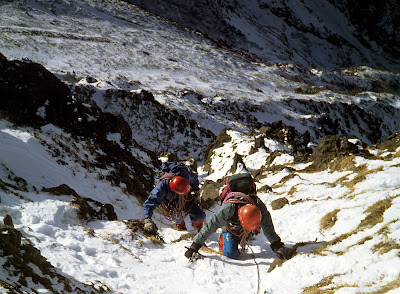 Yoshino Mitsuhiko underwent an even harsher trial. As teenagers, in the winter of 1948, he and a companion set out to traverse the main ridge of Yatsu-ga-dake. They crossed Aka-dake in a blizzard, then made the fatal mistake of trying to return to a hut on the ridge rather than continue descending. The companion collapsed from exhaustion, forcing them to bivouac in the open. After three nights of storm and sub-zero temperatures, the companion died, his legs already frozen blue below the knees. Yoshino made it back to the hut, where he hovered for days between life and death. He scrawled a farewell message on the back of his map:

The rescuers found Yoshino soon after he had written these words. He survived, but lost the front halves of both feet to frost-bite. That didn’t stop him from becoming a formidable alpinist in later life, notching up several hard new routes in the Japan Alps, as well as the first Japanese ascent of the Eiger north face.

Today, Yatsu was driving home lessons thick and fast. Shy away from one difficulty and you'll run up against a worse one later. Fail to read the guide-book or the terrain, and there's no way of knowing whether you are off-route or on. And how time flies when you are having fun….

I came up to Yamada, who was belayed to a single piton driven into a block of so-so lava. Now it was my turn. I set off into the powdery snow. A few metres above the belay ledge, the rope still innocent of running gear, I found myself confronting a rock step. Quite trivial, except that the only way up would involve stepping onto a suspect nub of lava at about knee height. 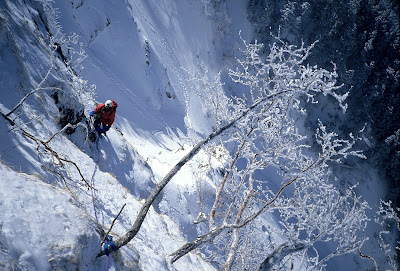 Ideally, climbers should check in their imaginations at the base of the climb. Mine was in overdrive. If it were only the frost that held this rock together, my front-points would lever the hold off the wall. For a brief moment in the afternoon, I would hang in space, the rope floating in loose coils like an astronaut's tether. Then my crampons would dig into the snowy glacis below, rotating me outwards as my deadweight continued to gain momentum. I would tumble past the belayer, in a classic demonstration of Fall Factor Two. With a force of half a ton or so, the rope would whip tight on that solitary piton ...

"Well, are you going to make that move?" interrupted Yamada. This was an order rather than a question. I moved up, heart in mouth. The nub held and I arrived at the next belay ledge: "Kakuho!" Now Yamada-san was coming up to the rock step. I saw his helmet move up – and then lurch backwards, out of sight. A rattle of stones announced that the suspect projection had parted company with the cliff. Fortunately, Yamada hadn't followed it, saving himself by a cat-like twist onto safe ground. Yatsu had just read us another lesson.

A while later, we topped out. Arrayed around us, the eight peaks gleamed golden in the level rays of the sun. Above towered Akadake, scene of Yoshino's week-long agony. There was Io, the Sulphur Peak, where Fukada's friend met his end. Closer to us was the gully where two of our own friends had made a forced bivouac in a snow-hole, fortunately without losing appendages. 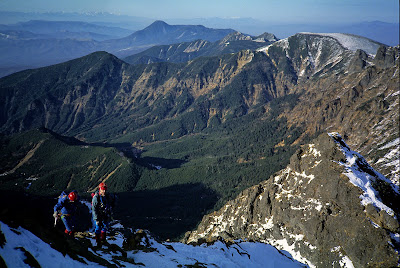 Yes, we might have reflected, anything that can happen on a mountain has happened on Yatsu. Its eight peaks set the stage for courage and fear, triumph and tribulation, light and shadow, the beauty and – what did Fukada say? – the pity of it. For a moment, the sun steeped in red the sheer cliffs of the Daidoshin, a mandala of mountaineering for avatars of hard-core alpinism.

There was no time for reflection then, of course. I was trying to coil the rope, in large loops, faster than the sun was setting. "Good one," I said to Yamada as I stowed the gear in my pack. "Yossha," he acknowledged and tightened his crampon straps another notch. We certainly didn’t want to trip up now. 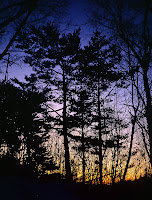 “The accident on Yatsugadake” (八ヶ岳の遭難) in Yamagutsu no Oto by Yoshino Mitsuhiko
Posted by Project Hyakumeizan at 9:48 AM

Wow.
Thanks for sharing Yoshino's experiences as well. A fascinating start to my day!

A super account. I had to read it twice to take it all in. I was trying to work out what time of year this climb was. It looks like early winter from the summit shot, but I was surprised to see the Amida icestep already frozen solid that early..

Many thanks for reading, Tom and Chris - as for the season, the photos are from various months. Where there is little snow, probably early December. Where everything is frozen up, January, February and perhaps March. As you can probably guess, there are actually no photos from the climb described in the article - we were too busy climbing. However, the first photo shows the route we were on. Or supposed to be on....:)

"where two of our own friends had made a forced bivouac in a snow-hole" can not have been pleasant for them. But it was also frightening for the rest of their group who did not go iceclimbing. When the pair did not return to the hut (Akadake Kosen) by nightfall, we went searching for them, but our shouts toward the dark, cold mountain faces were not returned. We feared the worst.

Soon after first light as we set off in search again, they returned. Without shovels, they had carved themselves a ledge with the aid of one teaspoon!

Many thanks for the comment, anonymous - well, I think the snowholers handled the situation well. This reinforces the importance of always carrying with you an alpine teaspoon - just in case of emergencies...

That was a riveting account of your ascent. Marked by so many grim tales, you definitely want to keep your wits about you.

I visited Yatsu in early November a few years ago and without snow it was just a usual ascent without much difficulty. I have always wanted to return for a winter climb though.