In Nihon Hyakumeizan, Tekari-dake is described as the southernmost point in Asia (and therefore the entire world) where creeping pine grows. Creeping pine or "haimatsu" gives the high mountain tops of Japan much of their character. Technically speaking, it belongs to the “sub-alpine” vegetation zone. 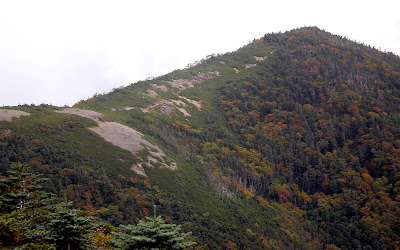 The Hyakumeizan author, Fukada Kyuya, also says that the summit disposes of a good view to the south. At least, that was the case in 1936, when he visited the mountain.

But more recent visitors have had trouble seeing either the view or the creeping pine. That's because a small wood of forest trees appears to have taken over the summit. The photo above shows the current situation. Wes Lang – author of the
Tozan Tales and Hiking in Japan blogs – took the picture just a month or two ago, when he climbed Tekari while completing his round of the one hundred mountains.

The photo immediately knocks down one theory – that the creeping pine was eroded off the summit by the constant to-and-fro of hikers' feet. It shows that the trees have come up from below en masse. Is climate change to blame? And when did the trees start arriving on the summit? More research is needed… And it would be good to find a photo that showed the summit area in 1936 or thereabouts. Maybe it's time to hand this one over to a local expert. 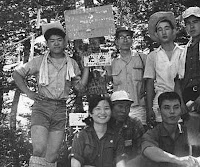 Wes Lang just discovered a group photo (left) that shows the area around the summit marker of Tekari-dake in 1965. That part of the summit was clearly wooded then, much as it is now. So maybe the trees have been there for some decades. But have they been there since 1936? We still need that photo.... Original of the photo shown left comes from this web-page.

Photo credit: many thanks to Wes Lang and congratulations on completing your round of the One Hundred Mountains. See also Wesu's account of how to climb Tekari-dake

Nihon Hyakumeizan by Fukada Kyūya in a forthcoming translation as One Hundred Mountains of Japan.
Posted by Project Hyakumeizan at 9:29 PM

Thanks, Han, for these links - if you look at these pictures, they seem to confirm that there are a lot of trees around the hut and on the summit of Tekari. Now what we need are some photos of Tekari about 70 years ago, when Fukada Kyuya came this way. Were there trees on Tekari then? Or just haimatsu? That is the question .....

Very cool. I realize I came across this post while looking up info about the Japan Alps. I wasn't on WordPress at the time. I'd like to link this blog to my blog if you don't mind.

Peter: naturally, you are very welcome - indeed, encouraged - to link to this posting from your blog. I should make clear, if perhaps the posting has failed to do so, that the case for climate change effects on Tekari is still very much "unproven", as Wes Lang's researches show. When I was recently in Tokyo, I asked Yama to Keikoku magazine if they had any photos of the summit area half a century or so ago. One would need such photos to show conclusively what had happened to the treeline in the decades since Fukada Kyuya's visit....

As I haven't been as far as Tekari and I know only what I read here and in Hyakumeizan I can't say too much. The climate has been warming and cooling through cycles since the end of the Little Ice Age and if that has an affect on the advance or retreat of tree growth on the mountain it might be difficult to say without corelating photographs with the climate patterns of the day.

Perhaps Tekari is exactly at the elevation where trees can exist or not depending on climate. I believe the tree-line in Japan is roughly 2,500 metres but I noticed in the South Alps it is more like 2,600 to 2,700 metres. Perhaps the trees on Tekari had slowly been encroaching on the summit since the end of the Little Ice Age.
In any case, this made for an very interesting read.