Travelogue continued: getting to know the Hyakumeizan author in his home town

7 December: I boarded a time machine at Osaka station. The bull-nosed Raicho express dated back to my student days, but now I meant to ride it much further into yesteryear. Yes, I was aware that a regular Japan RailPass does not even cover night trains, let alone time travel, but a voyage into the past was necessary if I was to get to know the Hyakumeizan author better. 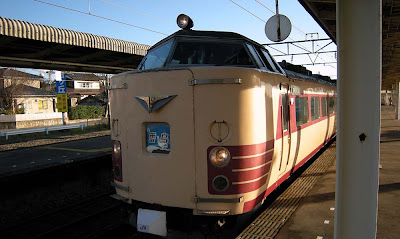 Alas, it is no longer possible to meet with Fukada Kyuya in person - he died in 1971, while climbing a mountain - but a museum commemorates him in his birthplace of Daishoji, Ishikawa prefecture. If you want to get to know somebody, you have to visit them at home, and this was why I was heading for the north country in an antiquated express train.

“My native mountain is Hakusan,” writes Fukada in Nihon Hyakumeizan. “You could see it from the top floor of the house where I was born, from the gates of our primary school, from the banks of the river where we used to catch minnows, from the sand dunes of the beach where we swam, in short from just about anywhere in our town. There it was, right in front of us, noble and beautiful.”

And there it was, noble and beautiful, as we came into Daishoji late in the afternoon. Winter had come early, veiling Hakusan in pure white. True to the description in Hyakumeizan, its summit snows swept down from the ridgeline in a flawless folds, unblemished by outcrops or shadows. 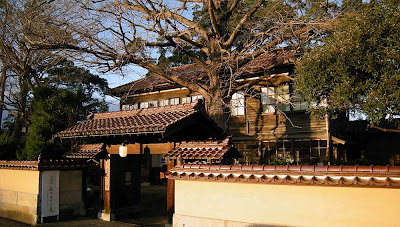 The sun was setting as we walked into the museum, which occupies a large and dignified wooden building just across the river where the young Fukada Kyuya used to catch minnows. An elderly curator met us at the door to welcome us to the Fukada Kyuya Yama no Bunkakan. The museum is run and staffed by volunteers from the Friends of Fukada Kyuya Society (深田久弥を愛する会), our guide explained.

Not for the first time, I wondered if Nihon Hyakumeizan is a book or a movement or even a cult. Apparently, the Ai-suru Kai was founded about a decade ago to collect and preserve memorabilia of the Hyakumeizan author.

The Hyakumeizan author? Well, I’ve taken to describing him so in this blog, but the tag might mislead. Before we’d even shuffled away from the entrance hall in the museum-provided felt slippers, our guide waved his hand at an entire bookcase of works – stories about north country girls, a war novel, collected essays, books about the Himalaya and Central Asia, and, of course, several more books about the Japanese mountains. This was a reminder that Fukada already had four decades of literary activity behind him before he published Nihon Hyakumeizan.

We moved on to a ‘kura’, a former storehouse, which was appropriately full of mountaineering gear. A pair of wooden skis with primitive leather-strap bindings recalled a descent of Mt Fuji in March, a feat which even today should be undertaken only by experts in favourable conditions.

On the floor was pitched a high-altitude tent with a round hatch, somewhat like the window of a tea-house. This was the door that Fukada and his two companions crawled in and out of at their high camp on Big White Peak (7,083m) in the Jugal Himal. Although they didn’t make the summit, the expedition is significant as one of the first Japanese forays to the Himalaya after the second world war.

Writers are like icebergs: you see in their books only as much of them as they allow you to see. Hyakumeizan offers few hints or none that its author climbed in the Himalaya or skied down Fuji. Fukada keeps himself largely in the background. Often he barely mentions his own experiences when describing a particular summit. Yet the book distils an entire life of climbing and writing. The almost ego-less style accounts for the paradox of Hyakumeizan: an intensely “personal choice” of mountains that nonetheless became a national institution.

We thanked our guide and walked briskly down Daishoji’s main street. Daylight was ebbing and we still wanted to pay our respects to the house where Fukada was born on March 11, 1903. We came up to an old wooden building, fronted with a sliding glass door to the shop on the ground floor. A sign in the window advertised that New Year cards could now be ordered. Fukada was the son of the local printer, and the business continues to this day, although it has passed out of the family. 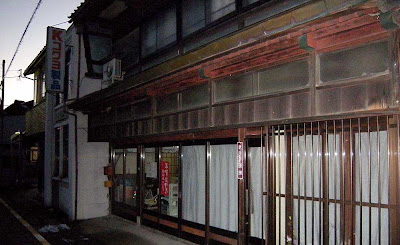 Daishoji is a small town – the Raicho doesn’t stop there – and it’s quite possible that you can still see Hakusan from the top floor of Fukada’s former house. Fukada could certainly see the mountain when he moved back to Daishoji for a few years after the war. At that time, he was writing a novel based on his experience as a platoon leader in China. Quite often, he must have looked out of the window:

Fine winter days are far and few between in the Hokuriku region. But on one of those rare cloudless evenings, when the air was clear and cold enough almost to crackle, Hakusan floated there in the pale moonlight like a work of fine crystal chased in silver. It was a scene drawn less from reality than from some land of fantasy.

The sun had already set and a chilly breeze was getting up. As we walked back to the car, we glimpsed Hakusan at the end of a side-street. The summit snows glowed with an unearthly radiance, as if illuminated from within. On this rare fine winter evening, the mountain had presented itself as Fukada Kyuya saw it sixty years ago.

For a brief moment, at least, the Japan Railpass had permitted a trip out of time. 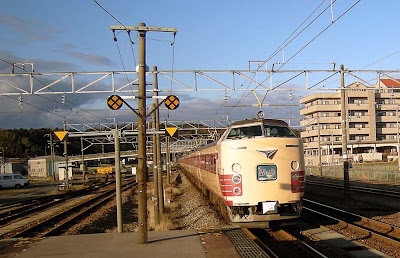 Posted by Project Hyakumeizan at 6:51 PM

Do they still run the Raicho with those old trains on a regular basis? I thought it had been replaced with the sleeker "Sanda- Ba-do-".

I was fascinated to learn more about FK's personal background, literary success, escapades in the Himalaya, etc.

In your translation of Nihon Hyakumeizan, I hope you can include a detailed introductory chapter about the man. This would give readers a fuller image of the person while reading the book, since you mentioned he wrote very little about himself.

Kamoshika Bob: I was amazed and delighted to find these old friends - so to speak - still running on the Hokuriku line. But there are other services, such as the "Thunder Bird" you mention, which use newer, sleeker, and much less nostalgic rolling stock.... Old and new seem to co-exist happily.

Hanameizan: your wish is my command - in fact, I've already written up such biography - largely but not completely based on the excellent book about Fukada Kyuya "Hyakumeizan no Hito" by Tazawa Takuya. Will send you a copy by e-mail and would be exceedingly grateful if you could kick its tyres and check for general roadworthiness before publication ....

There's also a short but good biographical sketch of Fukada Kyuya on Wikipedia (in English), as well as a much longer one in Japanese. Well worth checking out.

This was fascinating. Honestly, having read this, I think FK deserves better than his current Wikipedia article. I'll try to rectify that when I get a moment..