How the foreign climbers of Kobe propagated the art of rock-climbing in Japan. Or perhaps didn’t

July 14th, 1904 marks something of a false dawn in Japan’s mountaineering history. For this was the day when, watched by three apprehensive companions, the Reverend Walter Weston struggled up the highest granite obelisk of the Hō'ō Sanzan, a range in the Southern Alps. The first recorded ascent is described by Fukada Kyūya in his One Hundred Mountains of Japan:- 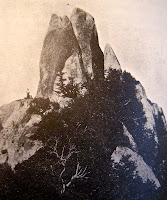 A tall chimney is formed where the rock pillars lean together. After an inspection, Weston realised the only chance of success lay in getting up the convex angle of the lower pillar. He got his companion to press his ice-axe against his feet to steady him as he stood on a small ledge, then began to bombard the top of the crack formed by the stone pillars with a stone tied to the end of his eighty feet of alpine climbing rope. After half an hour of disheartening effort, a lucky shot went home. Grasping the rope in his left hand, he then fought his way upwards until he reached a protruding block where the rope could afford no further help. Then he committed his whole weight to the obstruction above and, after a struggle, hauled himself onto the top of the lower rock. From here to the actual highest point was comparatively easy, for though the way up was almost vertical, the holds were good, and Weston was able to finish his climb in good style.

“This may be our country's first act of alpinism and it is certainly its first recorded rock climb,” asserts Fukada. That may be so, but Weston’s feat was not soon imitated. According to Fukada Kyūya, more than a decade elapsed before Weston’s ascent was repeated. In October 1917, a party of three led by H E Daunt of Kobe and guided by three experienced porters from Ashiyasu climbed the rocks from the north side and descended Weston's route.

H E Daunt was a leading light of the Mountain Goats of Kobe (MGK), a group of Kansai-based foreign mountaineers. It’s uncertain exactly when the MGK was founded, but its journal, Inaka – edited by Daunt under his club name of “Bell Goat” – started in 1915 and appeared at intervals for almost a decade. Copies of its 18 individual issues are now so rare that they change hands for several hundred dollars apiece. 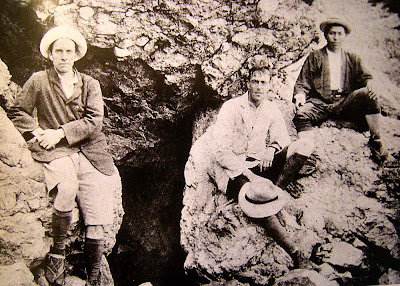 The Mountain Goats followed in Weston’s footsteps and perhaps ranged even further afield. Surviving photos show them on Tateyama, on Yari (see photo above, showing three mountaineers at Weston's Iwagoya bivvy site, although they may not be MGK members), on Shirouma, and on Senjo-ga-take in the Southern Alps. They practised their rock-climbing on the local crags of Mt Rokko and they organized expeditions on a generous scale, as an essay by a Reverend W H Elwin records:-

The preliminaries of deciding where to go, and of writing and then telegraphing for guide and carriers, of preparation of food and kit with the ideas of five people to work in, is an anxious matter if one allows oneself to indulge one’s feelings. But finally all is ready: tent, rope, provisions, garments, and footgear; and we are ready. The Japanese tabi and waraji (sock and sandal) are undoubtedly the best for the feet except perhaps for some of the snow work. Through a lack of co-ordination and some difference of ideas as to the best form in which to carry the needed calories we had an over supply of food. But on the whole we did well as our party of five only needed six carriers and a guide.

The MGK did not exist in isolation. Daunt was a member of both the (British) Alpine Club and its Japanese equivalent. Soon after the JAC was founded, in 1905, regional mountaineering clubs started to spring up all round Japan. Among the earliest was the Kobe Waraji (Straw Sandal) Club, founded in 1910, which later morphed into the Kobe Walking Society or KWS (神戸徒歩会). Its journal went by the name of “Pedestrian”, spelling out the English word in katakana.

Not all were content with pedestrianism. Moved to action possibly by watching members of the MGK scrambling on outcrops of Mt Rokko, the Kobe-based journalist Fujiki Kuzō set out to pursue steep, technical climbing. In 1924, he and other colleagues from the KWS founded the Rock Climbing Club. The concept was so new in Japan that it could only be rendered in katakana English. Thus the club’s name in Japanese is, quite simply, the ロック・クライミング・クラブ or RCC.

The following year, Fujiki published a manual on climbing techniques and led an epoch-making trip to Takidani, a system of cliffs and gullies in the Hodaka massif. Twenty years after Walter Weston made his ascent of the Jizō pinnacle, rock-climbing had finally taken hold in Japan.

Simple accounts are persuasive. The story of how Weston made Japan’s first rock-climb, then passed the baton to the Mountain Goats of Kobe, who, in turn, inspired the RCC is seductively straightforward. Perhaps too much so. When writing history, it’s always wise to heed Mark Twain’s jibe: “In the real world, nothing happens at the right place at the right time. It is the job of journalists and historians to correct that.”

One problem with the Weston-MGK-RCC thesis is that the Mountain Goats may not have made the second ascent of Weston’s climb at all. According to a Japanese authority (see References), the credit should go to two middle-school students from Kofu, who climbed the Jizō pinnacle in 1910, seven years before the MGK got there.

Equally difficult to fit into the Kobe schema is Maki Yūkō (1894-1989), a native of Sendai, who was climbing rocky ridges on Tsurugi-dake as early as 1917. Maki went on to make a widely publicized first ascent of the Eiger’s Mittelegi Ridge in September 1921, a feat that probably did more to inspire the new generation of Japanese alpinists than anything the Mountain Goats did. Rock-climbing in Japan stemmed from several roots, making for a more complicated but much more interesting story than can be pursued in a single blog posting.

目で見る日本登山史 by 川崎吉光、山と渓谷社
Chapter on RCC (page 160) suggests that Fujiki Kuzō and his RCC cohorts were influenced by watching the MGK at work on Mt Rokko. This book also has photos of the Mountain Goats on various Japanese peaks

人はなぜ山に登るか, volume 103 in the Taiyo Bessatsu: Nihon no Kokoro series (Heibonsha, 1998): chapter on 日本の岩登りsays that students from Kofu were the first to repeat Weston’s ascent of the Jizō pinnacle

Source of photos: Rock pinnacle from The Playground of the Far East (facsimile edition) by Walter Weston, other photos from 目で見る日本登山史. Click on pictures for larger versions.

If you want to climb the Obelisk yourself, refer to Tony Grant's detailed route description on Climb Japan.
Posted by Project Hyakumeizan at 8:11 PM

Shock, horror I think I have spotted a misreference. I believe the alleged photo of Daunt and co on Yari is actually yet another British missionary, WH Murray Walton. I'm pretty certain I've see the same photo in his book "Scrambles in Japan and Formosa,(1934)." Daunt had significantly less hair and was slightly more portly. If my memory serves me correctly Walton claimed to be the first (or first gaijin?) to do the Yari Hodaka traverse. In keeping with the subject of this article Walton states on p146 of his book, "...to the south rose Hoozan with it's pinnacle point, the scaling of which was perhaps Weston's greatest feat.."

Iain - many thanks for spotting the possible mis-attribution. Yes, the source book certainly implies that the photo comes from "Inaka". But, in case it doesn't, I've changed the text above!

The three characters in the photo in front of the Bozu Goya cave are, from l to r, the Rev W H Elwin, Rev Murray Walton and Dame san.

Many thanks for identifying the people in the photo, Iain. Well, the Rev W H Elwin (climbing men of the cloth seem to have loomed large in this period) was certainly a "Mountain Goat of Kobe" - see article - so it's probably fair to characterise the expedition as an MGK trip ..... A fascinating sidelight into Japan, if not Japanese, mountaineering history. But who was Mr Dame ....?

I love the Mark Twain quote. I am really enjoying your posts whenever I happen to stop by. And as I said before, I am looking forward to seeing this translation once it comes out. I will glean a lot more information from an English translation than I can from Japanese. Reading Fukuda's descriptions of the mountains has even my Japanese wife scratching her head and pounding the keys of her electronic dictionary to find an adequate English equivalent for some words.

Hi Guys,
This is great stuff. If you are interested I've come across a long list of materials in Japanese that nicely narrate the creation of the RCC and the advent of rock climbing in Japan.

It sounds, by all accounts, like a motley crew of alpinists. I guess I'm not surprised.

I'm happy to provide other references if you guys are interested in pursuing this further.

Keep up the good work.

Peter: thanks for the encouragement - I still don't have a publisher for the Hyakumeizan translation, but things are moving in a positive direction. Watch this space .....

David: many thanks for the offer of help on sources. Well, this blog touches on the history of mountaineering in Japan only insofar as it illuminates Nihon Hyakumeizan, but - as you see - Hyakumeizan makes quite a spread of references to that history. Your suggestion of Yasukawa Shigeo's Kindai nihon tozan shi is most valuable - it's on my shopping list for the next visit to Tokyo!