The recent tragedy on Tomuraushi recalls a century-old accident in the mountains of Chichibu.

Fickle island weather turns Japan’s mountains into a deadly trap. Last week, eight elderly people died when a storm hit Tomuraushi, a mountain in Hokkaido. Three years ago, four women succumbed to exposure after a summer blizzard caught them on Shirouma, a summit in the Northern Alps. Sad to say, both peaks belong to the “One Hundred Mountains of Japan”, suggesting that their fame may sometimes lure the ill-equipped or unwary to their doom. 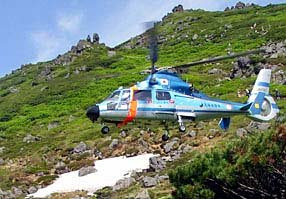 If so, the blame can hardly be laid at the door of the Hyakumeizan author, Fukada Kyuya. Although he chooses to dwell more on the sunnier side of mountaineering, he doesn’t minimise the dangers and annoyances. You only have to look at the essay on Kobushi-dake, a 2,460-metre mountain near Tokyo, to find an accident that is hauntingly similar to the more recent ones above:-

Kobushi-dake was the scene of the first mountain accident that I can recall hearing about. It caused an outcry. Indeed, if the news travelled as far as a country lad like myself, it must have created quite a shock. Unlike the present, where fatal accidents are reported every week during this mountaineering boom, in those days - and I'm certain this was in 1916 (Taishō 5) - mountaineering was still regarded as something of a hazardous adventure. The fuss was all the greater because four of the five victims were students who had just entered the Imperial (now Tōkyō) University, with all the promising future ahead of them that this implies. Just one of the party survived.

For that reason, the name of Kobushi-dake imprinted itself on my memory. Later I ascertained that the accident happened not on Kobushi-dake itself but on Hafu-yama, as the students were ascending to it. They lost the path in dense woods and died of exposure in a torrential storm. However, these events were reported as "the accident on Kobushi-dake" and that is how I came to read about it in my magazine for boys.

Assiduous researches by Iain Williams of the Toyohashi Alpine Club have now cast additional light on the Kobushi-dake accident. A contemporary account of the tragedy was published in a 1917 volume of Inaka, the newsletter of the Mountain Goats of Kobe. Appropriately, the article is entitled Dangers of Mountaineering:-

There is a crying need for good huts and shelters in the Japanese Alps, especially in the vicinity of climbing centres such as Kamikochi and Nakabusa onsens. Perhaps some attention may be paid to this by an apathetic public when a few more students have lost their lives from exposure. Here it may be as well to touch upon the inexpediency of climbing in bad weather, and an insufficiency of supplies in the way of the food problem. Take the typical case of some students from the Imperial University accompanied by a teacher from the Fukagawa Primary School, who set out at the latter end of July 1916 totally unprovided with a sufficient quantity of food and with absolutely nothing in the way of camp equipment to explore the forests on the mountain of Kokushi and Kobushi, which are reported to be situated on the borders of the three provinces of Kai, Shinano and Musashi. The following is taken from the obituary notices published by local papers under the head-lines of:- “Fate of the Missing Mountaineers,” “Perils of Reckless Mountaineering,” etc.

“The mountaineering fever among the Japanese runs so high that many are reckless enough to attempt mountain climbing without carefully counting on the difficulties and dangers besetting such journeys. On the afternoon of the 6th inst. a young man staggered into a saw mill at Mitomi-mura more dead than alive. After medical treatment, he was able to tell his story.

The party, after purchasing 1 to of rice at Hirose, Mitomi-mura, Yamanashi Ken, climbed the mountain. They passed the night at Shimomata and made for Mt. Kobushi, which adjoins Mt. Kokushi, 8550 ft., on the following morning. While they were proceeding towards the summit, they lost their way. Meanwhile heavy rain set in and as it was impossible to continue their climb, they had to return. One of the students, Koyama Hidezo, suddenly became ill, and two of the party set out to get water. In their search, they got separated in the mist, and Nakamura, the only survivor of the party, had to pass the night alone in the forest. After wandering in the forest for several days almost demented by hunger, fatigue and anxiety, he at last reached the saw mill as described above. Search parties were organised, and started for the forests under the leadership of police inspectors. A party of searchers succeeded in discovering the bodies huddled together, death evidently being due to hunger and exposure. According to a doctor who accompanied the search party, they had been dead four or five days. The bodies were taken to the Maruzen Saw-Mill, and relatives were sent for to establish identification.”

"Dangers of Mountaineering" republished from Inaka, the newsletter of the Mountain Goats of Kobe, Volume 6, 1917. Many thanks to Iain Williams of the Toyohashi Alpine Club for rediscovering and copying the source edition.

Photo of rescue helicopter over Tomuraushi by courtesy of 楽して登る日本百名山, a website (in Japanese) with much useful information on climbing the One Hundred Mountains
Posted by Project Hyakumeizan at 5:17 PM

It's unfortunate. But you always have to be prepared when entering the mountains, even in summer time. Several years ago I climbed Mt. Whitney on California in July or August. It is a 14,500 foot mountain so much taller then those in Japan where the climbers died. Never the less near the summit we were hit by a snow storm. We were smart enough to bring long pants, fleece jackets, emergency blankets, etc. You just never know.

The accident on Tomuraushi was really regrettable. Bad things seem to happen especially when you are unprepared and lack sensible judgement. Furthermore, the current fad to join so-called "tour tozan" in Japan could naturally involve potential danger. When I climb a local Hyakumeizan in my neighbourhood in its season, I often see tens (and sometimes nearly a hundred) of people in a group on a "Hyakumeizan tour." I see many of them ill-equipped, and the guides don't seem to be climbers (experienced hikers). I always wish good luck for them. I hope tour agents who plan such tours become more responsible.

Sadly, ego and poor planning seem to be a universal constant in the history of mountain accidents. Two more dead on Fuji last weekend, too.

It seems that some people have to learn the hard way that not all climbs have to be successful and that knowing when to turn back is strictly important. I read a Bradford Washburn account of a hike he did as a young man and when his party came upon iced over rocks he knew that it was better to turn back than to take unnecessary risks. It's better to turn back and later think, "I could have made it after all," than to proceed into danger and think, "Oh, hell, I shouldn't have continued." Adventures are fun and misadventures make good story telling. But in Japan there are people who set on on a climb or hike knowing that bad weather is expected but figuring they can beat it to the hut or shelter. Many people I have read about came down the mountain by helicopter and in a black bag.

Peter: indeed, knowing when to turn back is an art in itself. It occurs to me that you could assemble a small anthology comprising nothing but accounts of people being forced to turn back on Mt Fuji in winter ....