Travelogue continued: falling out of sympathy with a massif made of soft-swelling lava domes stores up trouble for later.

November 20: I ain’t getting no satisfaction. I started at 6am to get myself up here, but Kuju’s summit is bare, cold, bleak, unrelieved by shrine or crater. The massif's gently swelling lava domes don't impress. They can’t begin to compete with the spectacular caldera of Aso that floats on the misty horizon. 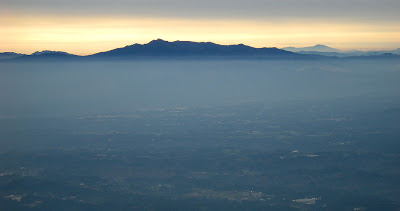 Two days ago, the volcanoes of Kirishima went all out to wow. They even produced an out-of-season azalea to show how they might look in spring. 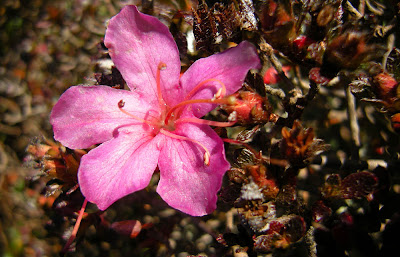 The only blossoms here are the frost-flowers that garnish every bush and grass stem. 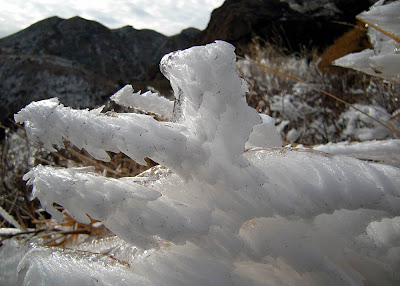 What was Fukada Kyuya thinking of when he made Kuju one of his Famous Mountains of Japan? 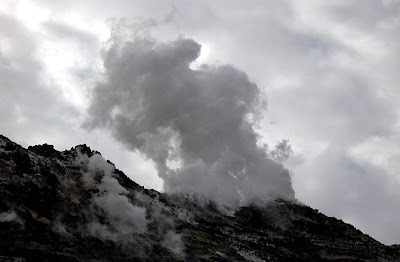 Volcanic drama is scant on this massif. Steam vents from a nearby ridge, but any industrial suburb could furnish more impressive plumes of noxious vapour.

I walk down to the saddle below Kuju, passing a small lake. This is as close to a real crater as we’re going to get. The placing of the stones in the water is inept; they do these things better in any temple garden.

Yes, we have a problem here. Falling out of sympathy with any mountain is risky. Lack of respect leads to inattention and that can plunge the unsympathetic mountaineer into a world of hurt. And, in the next posting, it will.
Posted by Project Hyakumeizan at 9:56 PM

I'm thinking the lack of sleep and your lightning pace finally caught up with on on this peak.

or perhaps was the monotones of the brown hues and clouds of an encroaching winter.

a visit in summer when the verdant greens come to life will surely change your impression of the place.

perhaps your pessimistic outlook stirred up the deities? looking forward to part 10 to see what kind of 'punishment' was cast down on you

I agree with you. I'm not a mountaineer but it seems to me that such a designated mountain should impress during all of the seasons. Rocks have a definite majesty, some more than others. While the skill of your photos is superb, what I saw didn't rock my boat. There's just a lack of AWWWWW on this mountain.

Thanks for your kind comments everyone.

Wes, I have a guilty admission to make - my lack of enthusiasm for this mountain may have had something to do with the "potto" in the ryokan. Overnight, the hot water in these things goes tepid, which does not make for a sustaining cup of coffee in the morning. And without a good cup of coffee at 6am, who can feel enthusiastic about a mountain ....

Kittie: it was a cold, grey day, which shows no mountain at its best. But I shall uncover some redeeming features in the upcoming post(s).