Waders of the lost arc

Figuring we’d get wet anyway, we spent most of the rainy season climbing rivers. The weatherbeaten Subaru was carrying us to our longest excursion yet when it emerged that nobody had remembered a head torch. 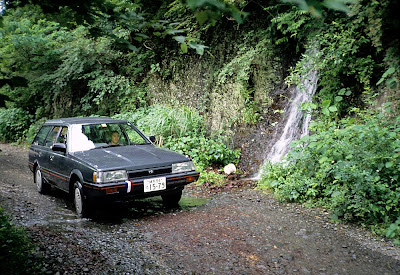 “Guys,” I remonstrated, “this is West Tanzawa we’re heading for.” This was by way of saying that the western half of the range is wilder, gnarlier, less manicured. In the eastern hills, you’ll find little tin signs identifying the more popular mountain streams and even some of the waterfalls. Such frippery is eschewed in the west, which is an hour or so further from central Tokyo.

In these western rivers, you follow your nose. And this, surely, is the charm of sawa-nobori; river climbing is the one mountain discipline where you find your own way, through pools and gorges, past waterfalls and up cliffs. There are no bolt ladders to guide you, no crampon scratches, no ski traces, not even footprints. Instead, you match your judgment, and your climbing or swimming skills, to the river’s flow. 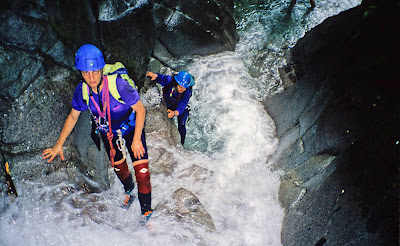 That said, the gravel pan where we parked was scored with bulldozer tracks, for not even West Tanzawa has escaped the heavy machinery of man. To get into the river, we scrambled over a high concrete entei. These dams are designed to control the erosion of ruling party’s mandate, a function they perform by diverting liquidity into the construction industry.

At last, we were properly awash, edging along rock-shelves above deep pools of brown water or wading through shallower stretches, the pebbles pressing through the thin soles of our sawa boots. Ahead, Ogawa-dani-roka faded into the sylvan gloom, a lost arc of tumbling water under a canopy of foliage and many-layered monsoon clouds.

The sawa’s name translates as “Small River Corridor”. To call it the “the Kurobe of Tanzawa”, as the guidebook does, is to overdose on hyperbole, given that Ogawa-dani cannot start to match the scale and majesty of the gorge that drains the Northern Alps. For all that, it is more a river than a mountain stream, especially during the June rains. 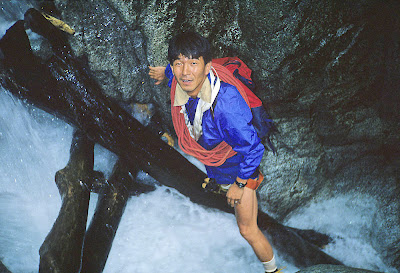 I kept that in mind as we approached the first obstacle – a chockstone that channels the river’s full force into a low but energetic waterfall. To my relief, a jammed log helped us up. Only one of our party fell off, and we fielded her on the rope.

Sawa-nauts go about their business with two eyes open, one for the terrain and one for the scenery. Next came a treat for the scenic eye, a mossy staircase spiralling upwards beside a step in the river. The pattern repeats in thousands of gorges across Japan, yet every iteration is subtly unique, as if some master gardener set out to create countless variations from just a handful of elements – water, rock and sand.

Rounding a bend in the river, we found our path blocked by a giant boulder. This the guidebook calls the Tsuru-tsuru-no-O-iwa, or Big Slippery Rock. The description fits the slimy runnel that sawa-nauts must scrabble up if they wish to continue their journey. At the same time, it does less than justice to the boulder’s mass, poise, and elegance of form. 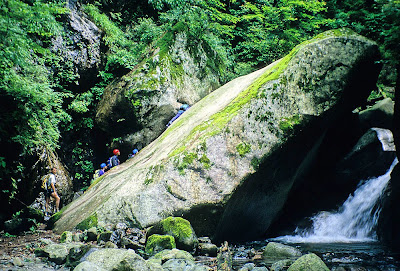 These qualities somehow brought to mind the Japanese national anthem, a brief verse that entreats the Emperor to perpetuate his reign “until pebbles grow into great boulders lush with moss”. Around then, much ink was being expended about whether the anthem should be sung at school graduation ceremonies. Perhaps the great boulder of Ogawa-dani would crumble into pebbles before that debate ended. Yet few national anthems are less chauvinistic than Japan’s; the words are taken from a collection of medieval poems… 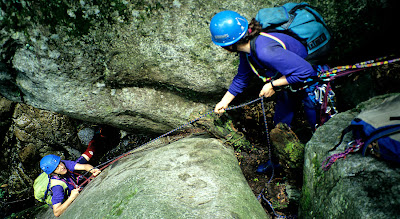 Some of our companions might like the comfort of a rope, suggested the vice president, who'd joined me atop the boulder. We should bring them up one by one, she said, even if it took longer. Make it so, I agreed, for neither of us held with the quicker but dodgier method of having folk secure themselves by sliding prusik knots up a fixed rope. As for time pressure, we probably wouldn’t need the rope again after this.

By the same token, not much was to be expected from the scenery upstream. Strange, I mused, how worthwhile climbing and memorable sawa-scapes run inextricably together. The insight might be trivial or it might not but, either way, there was no leisure to reflect on it.

In the gathering gloom, I glanced at my watch; with luck, we would get away without the head torches we hadn’t brought. A little later, we clambered out of the river and found the homeward path. Under the deeper shade of the forest trees, the pallid flowers of the kuchinashi glimmered like ghosts.
Posted by Project Hyakumeizan at 8:32 PM

A cracking read, and just the thing for the middle of this steaming Tokyo summer. The trials and tribulations of sawa-nobori - the look you're being given by your companion in the second photograph says it all!

What a breathless read...I felt like I was Right There, until we got to the boulder and I wanted to bolt. What an adventure! (And I learned about sawa-nobori!)

Thanks for reading, Chris and Kittie. Very little seems to have been written about sawa-nobori in English - even the mountains of East Greenland are better served - but, with your encouragement, I'll keep trying to fill that gap with postings on this blog....

This is the kind of prose I hope to one day be capable of producing on my own. Between you and Chris I feel I either missed out by not getting a British education or that I am a few talent cells shy of reaching your literary status. In particular I love how you always combine and eloquent description of nature with enticing views into the cultural and historical backgrounds of Japan. And very honest ones at that!

Thanks for yet another wonderful story.

Peter: thanks for the flattering remarks about a British education (ore? Project Hyakumeizan asks, pointing at his nose). But judging from the preview of your forthcoming book, you have nothing to be diffident about regarding your own talents - both photography and writing. Bring on that book!