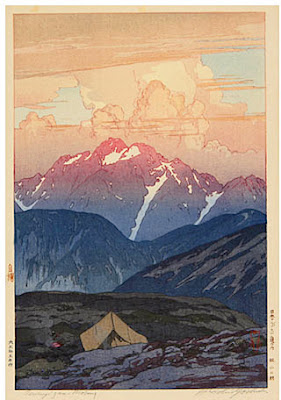 Text: On Tsurugi-dake, from Nihon Hyakumeizan (One Hundred Mountains of Japan) by Fukada Kyūya (1964):

Yes, as its name suggests, Tsurugi has all the sharpness and rigour of a sword. ... Defended by its iron citadels and snowy moats, the summit was long held to be inaccessible. According to legend, this was the mountain where Kōbō Daishi wore out a thousand pairs of straw sandals in vain attempts to scale it...

Related posts: The tiltyard of alpinism and Tales of the Genjiro
Posted by Project Hyakumeizan at 6:46 PM

And my comment - a year has passed - we're off to Italy/Austria/Hungary the 28th, returning Aug. 5th. Life's mountains keep beckoning, eh?