But are they strong enough to reshape Japanese mountaintops?

The Japan Alps blow away the competition: at 3,000 metres altitude in January, the wind speed averages 21 metres a second – some 75.6 kilometres an hour. That’s more than double the free-stream wind at the same height in the European Alps (10 metres a second) and a third faster than in the Rockies (14 metres a second). None of that would surprise the workman alpinists in the image below, who are skiing through a spring gale at Tsugaike. 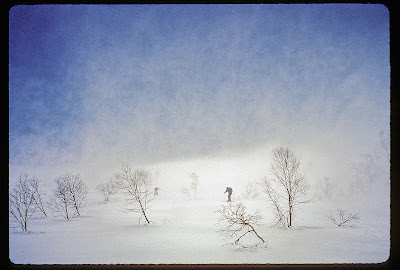 The YamaKei guidebook (see References) that quotes these statistics also draws attention to some curiously striped terrain on high mountaintops. It is wind erosion, says the article, that is responsible for these alternating strips of grass and gravel. You can see them at Kisokoma-ga-take (photo below) and Shirouma, among other places. 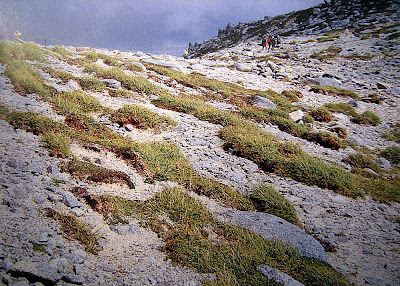 Whether or not this explanation holds – maybe somebody should go and take another look – nobody would deny that Japanese mountain winds can shift the real estate. Bashō himself testifies to that:-

As if to corroborate the famous haiku poet, I’ve heard stones drone past me at the fifth station of Mt Fuji. It’s hard to explain how pebbles can be flying at speed through the air on these relatively gentle mid-slopes, unless you posit that they were blown far into the sky from the summit regions. 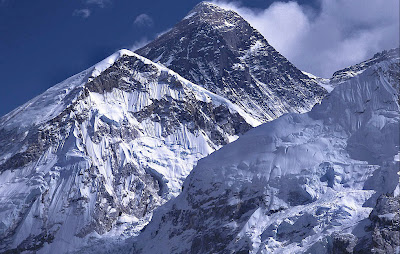 According to the YamaKei authors, the driving force behind Japan’s strong surface winds is the jet stream. Or rather two of them. In winter, the Himalaya often splits the polar jet into northerly and southerly streams – which then flow back together just to the west of Japan, causing atmospheric mayhem.

It’s probably no coincidence that the jet stream was first discovered from a site near Mt Fuji. This is where the meteorologist Ōishi Wasaburō launched his weather balloons in the 1920s. Unfortunately, he chose to publish his observations in Esperanto, ensuring that recognition was slow in coming.