A Japanese theologian's view of mountain religion in Japan 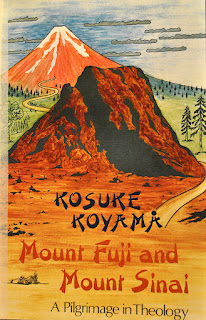 "Mountains have always held religious significance for people. Towering, mysterious, dangerous, overwhelming, some parts always appearing bright and visible, while others are shrouded in perpetual shadow, they are thought to be the abode of spirits, demons, and gods. Often the mountain itself is thought to be the connection between heaven and earth, the centre of the world, axis mundi.

The image of the mountain as axis mundi has inspired some of the most refined and impressive religious buildings of humankind, such as the hill temple of Borobodur in Java and the famous Angor Wat in Cambodia. They are cosmic mountains elaborated by religious symbolism.

In Japan since ancient times people have believed that the spirits of the departed reside on the mountains overlooking the villages, watching over their welfare. Eventually those spirits will become gods of the mountains, staying in the mountain during the winter months and coming out to the village from spring to autumn to help the villagers work in the rice paddy fields.

At a time of drought prayer is offered to the mountain. One name for a funeral procession is yamayuki, ‘going to the mountain’. A certain part of the mountain, always dark, is understood to be the location of ‘hell’ and another part, which appears brighter and happier, is the place of ‘heaven’. Thus the mountain itself suggests the totalities of light and darkness, life and death, salvation and damnation. The mountain must always be approached carefully and with awe…"

Excerpted from Kosuke Koyama, Mt Fuji and Mt Sinai: a pilgrimage in theology
Posted by Project Hyakumeizan at 9:25 PM

I really, really enjoyed this post. Read it a couple of times. Some years ago, I bought this tiny book in a dusty bookstore. It was about China. When I want the brain to kick into a higher gear, I haul it out. The part about China being the only country in the world not to have a creation myth (as it always just was) interests me. I can't tell you why; it just does.

Kittie: amazed and delighted that you have actually encountered this book. Until a few weeks ago, I'd never heard of it. In fact, I'm still in the process of reading it. It is full of breath-taking insights into the points of divergence and convergence between the world's religions - such as the one you mention. I posted the excerpt about mountain religions in Japan because it seemed to sum up the topic as elegantly as anything I've ever read on this subject ....