A lethal conspiracy of high winds, new snow and a lee slope 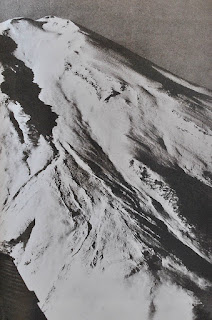 Thursday’s tragedy on Mont Blanc calls to mind a similar disaster on the slopes of Japan’s highest mountain. On the morning of November 28th, 1954, parties from three university mountaineering clubs were practising their winter alpine skills at the bottom of Yoshida-Ōsawa (right), the deep gully running down the volcano’s east flank.

At 10.40am, an avalanche started at the top of the gully, triggered the snowslopes below, and gathered them into a massive slide that cascaded as far as the third station level.

When the snow-rubble settled, 15 students from Tokyo, Keio and Nippon Universities had lost their lives. The original caption of the picture below, showing rescue operations near the third station of Tsubakuro-sawa, is “Requiem for our friends who sleep on Mt Fuji”.

Windslab avalanches of the type that swept Mt Maudit this week are less frequent in the Japanese mountains than in the European Alps. That's because Japan's maritime climate produces a warmer, more cohesive snowpack, with fewer avalanche-prone weak layers. But heavy falls of new snow, high winds and a lee slope – as on the east side of Mt Fuji – can combine for deadly effect on any high mountain. 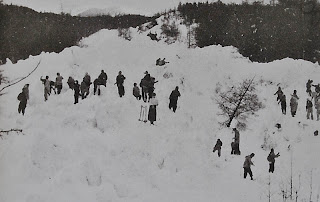 More about the power of snow in the Japanese mountains: Avalanche
Posted by Project Hyakumeizan at 1:39 PM