Excuse me, before we get going, while I pour myself a whisky. This glass? You’ve noticed how it’s engraved with “Wadachi” in hiragana, and next you’ll be asking how it got here, all the way from Shinjuku … 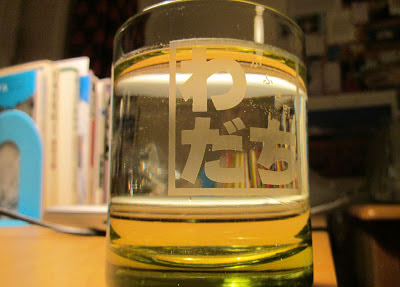 28 April: Like many a Japanese mountaineering tale, this one opens with an overloaded figure clomping through the world’s busiest station. I made the 11.20pm “donko” with a minute to spare. Sue and Caspar were already aboard the late-night slow train with battered blue cars – the one that stops at every halt between Tokyo and the Shinshū highlands, spilling out first sozzled salarymen and then sleep-deprived mountaineers. We braced ourselves across the hard seats for a long and smoke-ridden journey.

29 April: after being spilled out at dawn onto the deserted platform of Shinano Ōmachi, we took the taxi up to Ogisawa. Here we boarded the tunnel bus through to the Tateyama cable car. 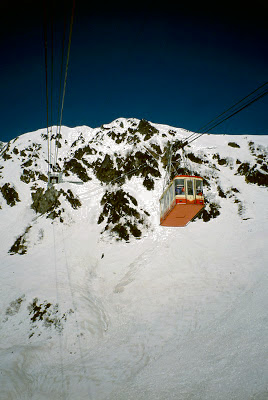 By 10am, we were 3,000 metres higher and ¥6,000 poorer. Now we could toss our skis onto the snow, snap our Koflachs into the beaten-up Silvretta 404 bindings and haul ferry-weight packs to our shoulders. Then we shuffled our boards into the uphill track and headed out towards the gap in the caldera rim. Our J-Haute Route was under way. 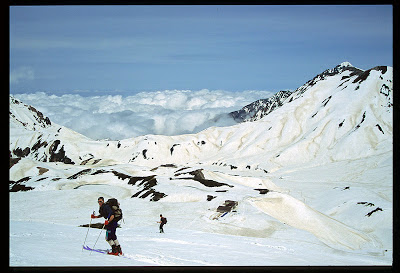 Purists might object that Japan’s longest high-level ski traverse lacks the grandeur of its European original. And, admittedly, you won’t meet with glaciers or the Matterhorn in the Northern Alps of Shinshū. As if to compensate, the storms here are wilder and the gaps between refuges longer. As for escape routes, they are far and few between.

For now, the skies were blue. Harassed by a lively spring wind, we came up to the breche on Tateyama’s caldera rim. Somewhere in the southward haze lurked Yarigatake’s spear, separated from us by sixty-odd kilometres of high, snowy ridgelines. It was a view that demanded our respect and got it. 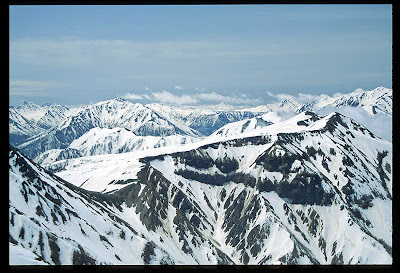 The Haute Route was quick to claim its first victims. While stripping off his climbing skins, Caspar let drop a ski that ran away several hundred yards. Minutes later, on this first downhill run, I pitched headfirst into the gloppy snow, smashing my favourite sunglasses. Sue slid sedately downslope; she’d done this before.

The weather closed in as we climbed the opposite slope, buffeting us with knock-down gusts on the ridge above Zaratoge. We found our way through driving billows of grey mist to the Goshikigahara hut, on its tilting plateau of ancient lava. 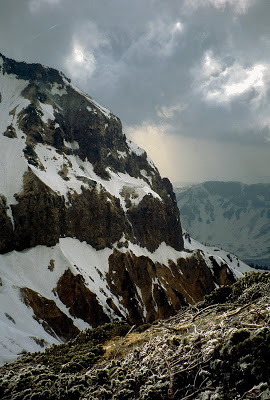 30 April: J-Haute Routers should, if they can, make a one-day dash from Goshikigahara that vaults them over the giant bulk of Yakushi to Tarōdaira. For that is where the next open hut awaits. For us, though, this was never going to work. Clouds were tumbling low as we left the hut at 5am, and the snow hadn’t frozen. 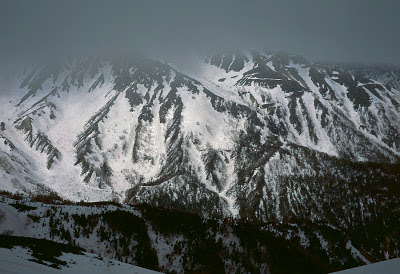 Labouring through the slop, we tackled the first of three intermediate peaks on our route. Where the ridge narrowed down, we added the skis to our loads, tying them onto the packs in an A-shape, or towing them behind on a lanyard. By mid-morning, we’d had enough. Postholing our way on foot to the top of the third peak, we saw Yakushi’s north ridge swallowed up by the racing clouds; no way forward there.

We’d prepared for this scenario in our planning session. If we had to stop short of the next hut, we’d bivouac – for which purpose we were carrying camping gear as well as shovels and snow-saws for carving out a snowhole. But snowholing didn’t look too attractive under these lowering skies. And the snow was sodden and grey.

At this point, we came up on the hut at Sugo col – still buried to its eaves in snow, of course, and shuttered for the winter. Except, it seemed, for one window that stood open. We heard voices within; a Japanese party was already in residence. I crawled into the narrow gap between roof and snow and made enquiry; yes, there was still plenty of room. 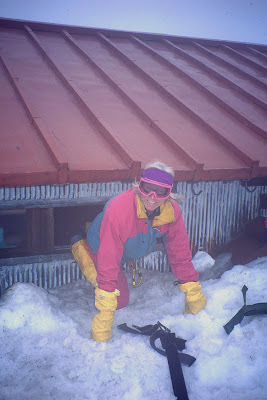 1 May: snow, wind, and rain. We festered in the hut’s dark-timbered gloom, firing up the Epigas stove for an occasional brew. It was good not to be huddling in a dripping snowhole. The wind was warm, suggesting that the weather wasn’t going to improve.

2 May: we followed ski-tracks up the broad ridge to Yakushi’s summit at almost 3,000 metres. But what worked well on the way up betrayed us on the way down. Still in cloud, Caspar short-swung his way elegantly into the wrong gully, following an errant pair of ski-tracks. We discovered their perfidiousness when we met a solo Japanese ski-mountaineer carrying his skis back up the slope.

At this point, I pulled out map and compass, took a bearing, and led the party – including the errant soloist – masterfully into another wrong gully. We’d just realized our mistake when, like a magician sweeping a silk cloth from a table, the clouds parted to reveal the hut. We reached it an hour after everyone else.

In the evening, a member of the local mountain rescue party came to our room to sample our brandy and offer some of his Suntory in return. Somehow the talk turned to the Great Waterfall of Tsurugi, which his team had visited the year before. Unfortunately, the river had swept away one of the party on their return journey. 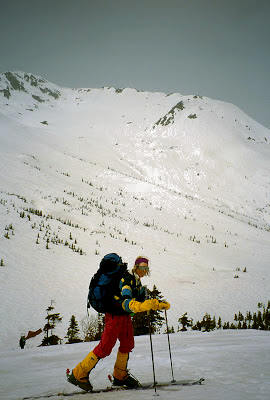 3 May: setting out at 5.30am, we skinned up Kitanomata, traversed a long hillside, then climbed to 2,840 metres up the steep reverse slope of Kurobegoro. The east side of this mountain encloses a huge scoop, carved by an ancient glacier into a shape like that of Ben Nevis or the Snowdon horseshoe.

We skied down the face of this giant bowl, then contoured round to the valley under a pale blue sky, heading for Mitsumata-renge, our next mountain. As we climbed again, we looked back towards Tateyama: the distant peaks faded into the yellow haze of dust blown in from the Yangtze plains. Soon after we reached the hut at Sugoroku, in mid-afternoon, the clouds closed in again ...

Nice read, looking forward to the next installment.