How a pioneer alpinist helped to push the case for Japan’s vanished glaciers.

Summer 1902 was a pivotal season in the history of Japanese mountain exploration. On August 17, the banker and journalist Kojima Usui (1873-1948) scrambled to the top of Yari-ga-take. “For why?” he later explained, “Because Yari is high, Yari is sharp, and Yari is steep.” This was the first time that anybody had expressed a modern, alpinistic impulse in Japanese. Novel though it was, the rationale soon caught on. A few years later, Kojima founded Japan's first alpine club.

In the very same month, a young geographer strode over the summit of Shirouma, another high peak in the Hida mountains. Yamasaki Naomasa (1870-1929) had just returned from Europe, where he'd studied under the greatest glaciologist of the age, and he knew exactly what to look for. On his way down the Great Snow Valley, he found telltale scratchmarks engraved on a streamlined red boulder. To the expert eye, this suggested that an ancient glacier had once scoured the valley.

Back in Tokyo, Yamasaki announced his discovery in a public lecture delivered in September of the same year. “Did Japan really lack glaciers? (氷河果たして本邦に存在せざりしか),” he asked, rhetorically, before setting out the opposite case. This was a provocative thesis for a young academic who’d just started on his first job, as a geography teacher at the Tokyo Higher Normal School.

Few were convinced. Sceptics found plenty of ammunition: where in Japan, they asked, can you find the obvious moraines and “drifts” of pulverised rubble that so obviously marked the extent of Europe’s ancient glaciers? The naysayers had a point: the missing moraines didn't show up clearly until aerial photography revealed them long after the second world war.

Kojima soon got to hear about Yamasaki's first glacier lecture, although he didn’t attend as he’d “only just laid aside his travelling clothes”. Already, an “indelible association” was forming in his mind between Yamasaki, the Hida mountains and glaciers. And he was deeply impressed that the scholar had seen traces of ancient glaciation where they’d been missed by all those expert foreign mountaineers who’d roamed the Japanese mountains in the previous century.

When, in September 1904, Yamasaki announced another public lecture at the Tokyo Geographical Society, Kojima was quick to attend. Before Yamasaki came to the podium, the banker had to sit impatiently while another speaker held forth on the phrenology of natives in the Hietsuno district – not a topic that Kojima had much sympathy for. When the geographer did appear, he'd chosen a less tendentious title for his lecture – “Characteristics of the high mountains (高山の特色)” – but the case for ancient glaciers was, if anything, even more strongly argued.

Kojima made his pencil fly over his notebook as he scribbled down Yamasaki’s observations. “My Yari!” he thought, as the geographer showed a sketch of the spire-like peak. Yamasaki went to mention Kuro-dake, Yakushi-dake and Otenshō-dake – a peak that Kojima had never heard of – mountains that had attracted his attention on a recent trip through the Kurobe river valley. “All these peaks are exceedingly sharp, like the blade of a chisel,” the geographer noted. Could it be that ancient glaciers had shaped them?

Some time after this lecture, Kojima joined the Tokyo Geographical Society. His election was proposed by Yamasaki and Shiga Shigetaka, the author who had inspired Kojima's trip to Yari and who was (or would soon be) an honorary vice-chairman of the Japanese Alpine Club.

For his part, Yamasaki helped to advertise the new alpine club by publishing an announcement in the January 1906 edition of the Tokyo Geographical Society’s journal. And he was quick to join up himself. His support may partly account for the strong showing of scientists within the club’s membership roll. Yamasaki and Kojima became firm friends – it might have helped that they were more or less the same age and were both born in Shikoku – although it’s not recorded that they ever went on a mountain expedition together.

Meanwhile, evidence continued to pile up for past glaciation in the Japanese Alps. On November 22, 1913, Kojima attended a particularly “unforgettable” lecture at the Geographical Society. After Yamasaki had again spoken about glacial action in the Hida Range, the (rather small) audience crowded round a desk to inspect the disputed “Hettner stone”. This scratched-up block of biotite granite had been discovered beside the Azusa river near the village of Shimajima by Alfred Hettner (1859-1941), a visiting German geologist.

As the room darkened on this winter evening, candles were brought out to illuminate the stone, picking out the fine parallel lines on its pale surfaces. The striations were compared with those on similar rocks brought from Europe, while Jinbō Kotora (1867-1924), a geologist best known for his surveys in Hokkaido, fired off volleys of questions. According to Jinbō, such scratches could easily be explained by ordinary weathering processes or the action of avalanches.

In 1915, Kojima’s bank sent him to the United States to run its Los Angeles and San Francisco branches. A prolific letter-writer, he kept in touch with Yamasaki. In late May 1922, the geographer visited San Francisco on his way back from a geological conference in Brussels. By this time, Yamasaki was well established in his career – he’d moved in 1911 to Tokyo Imperial University as a professor of geography within the natural science department and, in 1919, he’d set up an independent geography department.

Checking into the Fairmont Hotel on Nob Hill, Yamasaki wasted no time in paying a visit to the Kojima family at their bank-owned residence in Pine Street. Lacquered boxes of “gomokuzushi” were served and Kojima was gratified to see how Yamasaki cleaned his bowl down to the last grain before laying his chopsticks neatly down: the professor seemed to have a pent-up appetite for Japanese food after subsisting for so long on western fare.

Then Kojima took his guest on a sight-seeing drive round San Francisco. At the Golden Gate Park Museum, they admired a landscape by Sadahide. The ukiyoe print may have intrigued Kojima, the art critic and collector, more than it did Yamasaki, the scientist. At any rate, the conversation during Yamasaki’s stay centred mostly on glaciers. By this time, of course, Kojima had seen plenty of glacial landforms for himself, on excursions to the Sierra mountains.

But what about those ancient glaciers of Japan? Yamasaki reported that Professor Penck, on seeing a photo of Yari, had said that it suggested a glacial horn. As Albrecht Penck (1858–1945) had elucidated Europe’s four most recent ice ages, this was a powerful endorsement. Of course, it was also an endorsement of Yamasaki himself, who’d studied under Professor Penck in Vienna during his European study tour around the turn of the century. By 1922, glacier sceptics were starting to lose ground in Japan; within the geographical community, Jinbō Kotora was the most prominent hold-out. 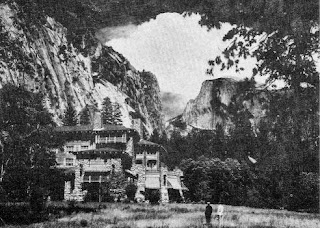 To round off his visit, Yamasaki wanted to visit Yosemite, famous then as now for its towering glacier-carved cliffs. But this could not be; all accommodation in the valley was booked out for a conference of national park employees and not even Kojima’s formidable web of connections could get them a room.

In the end, the Yosemite impasse may have been no more than a minor disappointment. By this time, after all, mountain topography represented only a minor focus within the magisterial sweep of his academic interests: Yamasaki's magnum opus, completed in 1915, was a 10,000-page regional geography covering all of “Great Japan”.

By the same token, it’s unclear what the geographer gained from his contact with the Japanese Alpine Club beyond a sympathetic hearing for his glacial theories. His most important field trips to the Japan Alps appear to have been undertaken independently of Kojima or other club members.

In the opposite direction, though, Yamasaki’s influence was profound. Wielding his ever-busy pen, Kojima was quick to tackle the subject of glaciers. Yamasaki’s theories feature in an essay on “High mountain snows” (高山の雪) published in 1911 in a magazine for students – although Kojima chose to stay neutral in this venue on the question of whether glaciers actually had existed in Japan.

Why should a banker and hobby writer bother with the science of ice and snow at all? As if to justify straying from his usual journalistic terrain, Kojima takes care to explain himself in the essay’s opening section:


I believe that, just as things go in or out of fashion, there are old and new styles of nature. … Modern man can’t be satisfied with appreciating nature in the time-worn shape of famous places and set-piece sceneries such as the Eight Great Landscapes of the Home Provinces or Dawn over Futami-ga-ura. Rather, it is the unknown and the untracked that attracts the spirit of exploration which surged forth so remarkably in the nineteenth century, allied as it is with the spirit of scientific enquiry. As a result, mountaineering clubs have now been established in every civilised nation, first in Europe and America, and latterly in Japan. For what are the mountains but vast vertically framed museums or galleries for the panoply of natural phenomena? Nothing could be more fitting, then, as a subject for investigation than snow.

Viewed in this light, the scientist and the alpinist are kindred spirits. There’s an element of legerdemain in Kojima’s exposition, given that science had played little or no part in the original inspiration for a Japanese alpine club. Yet, once the club was established, scientists did flock to join. And, quite naturally, glaciers did loom large in the minds of the early alpinists. Arguments for and against their former existence in Japan flew to and fro in early editions of “Sangaku”, the club’s journal. And, when it was debated in the same pages whether Honshu’s highest mountains might be dignified as “Alps”, glacial landforms were adduced both for and against the case.

Ultimately, both Yamasaki and Kojima prevailed. The "Japanese Alps" were well on their way to taking root before Kojima left for America. Glaciers took longer to establish. As late as 1918, no less an authority than Walter Weston would side with the naysayers after weighing up the rival arguments. And it wasn't until after Yamasaki's death that the majority of geologists were persuaded that ice-streams had once coursed through the high mountains of Japan.

A final vindication for Yamasaki came just a few years ago when researchers found “live” relic glaciers  under permanent snowpatches on and around Tsurugi-dake. A century or so after the pioneer alpinist and the young geographer explored the Hida mountains, Japan at last has both Alps and the glaciers to go with them.

Walter Weston summarised the debate on Japan's glaciers in "The Playground of the Far East" (1918), Chapter IX "The Northern Alps Revisited", pages 190-96 in the original edition.

Details of Yamasaki Naomasa's academic career are from this outline biography by Brian Welde (University of Missouri) and Mark Eiseman (Valparaiso University).

Posted by Project Hyakumeizan at 9:30 PM

More of Kojima's writing's can be found here, at an affordable price:

Many thanks for this information, Ted. One day, I'm going to score myself a complete set of Kojima's "Nihon Alps" writings. But not soon: it's going to take quite a while to read my way through the two collections of his essays that are still in print - the "Alpinist's Journal" and the (selected) "Nihon Alps"....