In the matter of Mrs Weston

For Japanese alpinism, 1902 marked an epoch. In August, Kojima Usui climbed Yari-ga-take, a feat that led to the founding of the Japanese Alpine Club. And, in the same month, the geographer Yamasaki Naomasa found signs that these mountains had once been glaciated.

The year was no less epochal for Walter Weston (1860-1940). On April 3, the mountaineering missionary at last married - he was now well past his forty-first birthday. The bride was Frances Emily (1872-1937), the second daughter of Sir Francis Fox, a civil engineer.

At this time, Weston was between his first and second stays in Japan, serving as the priest in charge of Christ Church at Wimbledon in Surrey. Later in the same year, Mr and Mrs Weston would take ship for Yokohama, where they would both work for the Society for the Propagation of the Gospel.

Also propagated during this stay, which lasted until 1905, was quite a bit of mountaineering. The couple's alpine adventures were later written up in Weston's second book about Japan, The Playground of the Far East (1918) - which also covers the Westons' second stint in Japan (Walter Weston's third), from 1911 to 1915.

Mrs Weston soon made the acquaintance of Mt Fuji and its notoriously fickle weather. As her husband later recorded,

Early one July, my wife and I were not only imprisoned, at a height of 10,000 feet, by a storm which raged on the mountain for three days, but our coolies refused to go to the actual summit, and we had to finish the climb alone in the tail end of the typhoon … Now, on each occasion my wife has climbed Fuji with me such storms have been our lot .

Even greater excitement awaited the Westons at Kamikōchi, the gateway to what was then being rebranded as the "Japan Northern Alps". In those days, a herd of cattle belonging to the breeding farm of the Nagano Prefectural authorities used to graze the right bank of the Azusa river. It was here, one summer afternoon, that the Westons were confronted by an angry bull:

Suddenly, to our astonished gaze presented itself the form of this fierce monster planted firmly in the path no more than a dozen yards ahead. There he stood, waving his uplifted tail, pawing the ground, and shaking his huge, sharp horns with alarming and increasing energy… At the moment my wife happened to be in front of me … In answer to an agitated exclamation, "He's coming for me, what had I better do?" the only natural reply was, "You take cover to the right, and I'll go to the left," a manoeuvre no sooner suggested than executed .

Frustrated in his efforts to gore the Westons, the bull then chased good old Kamijō Kamonji into the middle of the river. Fortunately, the mishap did nothing to dampen the faithful guide's regard for his missionary client and friend.

As her sangfroid during the bull incident would suggest, Mrs Weston did not shrink from steep ground. A photo shows her taking part in a roped ascent of Yari-ga-take, the spire-shaped peak above Kamikōchi. Just as in Weston's first visit to Yari, two decades earlier, the party was guided by old Kamijō, this time accompanied by his son and Kamijō's dog. (Sorry, Hana, this hound may have scored the first canine ascent of the spire-shaped peak.)

In the summer of 1913, the Westons headed for Shirouma, a peak that had previously eluded him. By this time, modernity had reached the Northern Japanese Alps. Trains now ran where, on his first visit to Japan back in the 1890s, Weston would have walked or taken a horse-drawn basha. A new light railway took the couple as far as Shinano-Ohmachi, from where they hired a "spacious landau" that had seen better days. At Akashina, they stayed at a hotel which advertised itself as a "station of the Japanese Alpine Club". 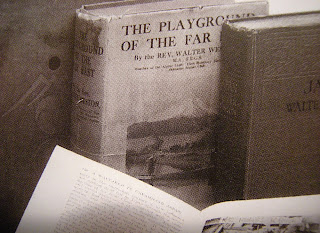 On foot now, they traced the "delightful route" up to Nakabusa. There, with immense pride, their host told them that one of the springs had been found by a government analyst to contain traces of radium - a prospect that the English couple "could only view with sentiments somewhat mixed".

Next morning, a four-hour scramble in the cool air of the fragrant forest took them to the ridgeline south of Tsubakurō-dake. Then they traversed over Ōtensho, before putting up for the night in a comfortable bivouac cave at Ninomata-koya. An eleven-hour tramp on the third day brought them down into Kamikōchi, where the whole onsen crew turned out to welcome them. For this was the first time that a "European party" had ever traversed this route, Weston recorded.

That remark was telling – for Walter Weston, the pioneering days were over. In 1892, he’d climbed Yari years before either the Japanese surveyors or Kojima Usui got there. But now the roles were reversed – it was the gentlemen of the Japanese Alpine Club, led by Kojima himself, who had pioneered the long ridge route that the Westons had just completed.

All this meant that it was a bit late for Mrs Weston to break a trail of her own. The Japanese women of the Taishō era didn’t need role models from abroad – they just went climbing. As for foreign women climbing in Japan, that particular taboo had been shattered half a century before, when Mrs Parkes, wife of the British minister to Japan, accompanied her husband to the top of Mt Fuji.

Curiously, it may have been back in Europe that Mrs Weston helped to blaze a trail. Her climbs in the Swiss Alps made her eligible to join the Ladies' Alpine Club, founded in 1907 by the hard-driving Mrs Aubrey 'Lizzie' LeBlond.

Indeed, that was the only option for a lady mountaineer at the time. The original Alpine Club, of which her husband was a proud member, would not admit ladies until 1974. In Japan, piquantly, the Japanese Alpine Club formed a women's section in 1949, modernising itself more quickly than the model on which it had been founded…
Posted by Project Hyakumeizan at 10:06 PM

You knew that canine picture would catch my eye! Perhaps I will take a copy with me next time we head off up the Kamikochi valley, as ammunition against those rabid "green rangers".

I want to hear more about "Lizzie" Leblond! :)