Book review: how the 10 Classic Alpine Climbs of Japan were scaled and selected 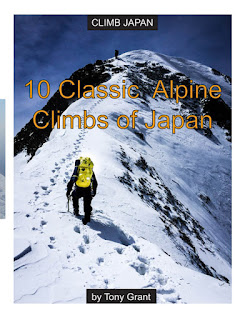 For five sweaty hours, unforewarned that a bridge and much of the path had long ago collapsed, we struggled along a gorge called the Tenjō (Heavens Above!). And this was just the approach to our climb. Alas, Kindles didn’t exist in those days. If they had, we could have downloaded Tony Grant’s 10 Classic Alpine Climbs of Japan and saved ourselves a world of hurt.

Recently released as an e-book, Tony’s book points you up some memorable routes. Just as importantly, it tells you how to get to and from the climbs safely. If you want to scale Yari’s Kitakama Ridge, for example, you’d be well advised to avoid Tenjō-zawa and, instead, to make a slightly less gnarly approach from the east. Naruhodo; had we but known…

Experience is needed to write a guidebook like this. Tony arrived in Tokyo with more than a decade of mountaineering behind him. Starting with a Plas-y-Brenin rock-climbing course in Wales, he gained multi-pitch experience in Poland’s Tatra mountains during a posting with the British Council, a cultural agency. While with the Warsaw University Alpine Club, he took a winter mountaineering course with a Himalayan veteran, who habitually free-soloed icy gullies alongside his roped-up students.

By way of short postings to Bangladesh and Azerbaijan, Tony arrived in Tokyo nine years ago. He now supervises the development of English-teaching apps for the British Council. Despite the Council’s best efforts, though, the English language has yet to seep far into the Japanese climbing scene. So, when Tony arrived, he found next to no resources for foreign climbers either in print or on the web.

Unfazed, Tony did what many gaijin climbers do. He got in touch with one of the Tokyo-based international hiking clubs, and started cragging with two of its leading rock-climbers. He also hooked up with well-known mountain bloggers, Chris White and Hanameizan. Not all these early forays were successful: “In my first few years in Japan,” he recalls, “we’d often be scrabbling around at sunrise for the start of the climb and finding ourselves up the wrong gully.”

One breakthrough came when Tony met a Japanese musician and alpinist on a hike. A few days, later, the British Council’s receptionist called Tony to say a gentleman had left a carrier bag for him – which proved to be full of old guidebooks. These were eye-openers to what Japan has to offer in the way of alpine climbing. At the same time, there were some gotchas – the books were in Japanese, route descriptions were outdated, or said little about those all-important approaches and descents.


Such lacunae led, at least once, to harrowing episodes. Topping out of Tanigawa’s classic Nanryō route, Tony and his companion decided to climb onwards to the ridge above. They thought it would take an hour, at most. Vertiginous rakes of slippery grass, head-high weeds, slimy fixed lines that might or might not hold, and rock steps forced them to triple that estimate and more. “Never again,” says Tony.

To save others from repeating such epics, Tony distilled his experiences into a blog, Climb Japan. And the blog, in turn, has flowed into his e-book. (There's now a print version too.) As you'd expect from the blog, the route descriptions are well illustrated, complete with strategic arrows overlaid on images to point out key turnings and directions. Excuses to find yourself fossicking in the wrong gully at sunrise just got fewer.


How did Tony pick out the ten routes from the much greater number he’s climbed? “Apart from the three routes on Tanigawa, a lower mountain,” he explains, “they’re huge natural lines that run right up to the top of peaks that rise past or close to 3,000 metres. They’re all lines that any mountaineer would want to climb.”

Also, he adds, all ten are on mountains that belong to Japan’s famous One Hundred Mountains. If you need to know what the Hyakumeizan are, Tony has added a brief explanation within the “Japan Extra” sections of his book. These are ten essays that accompany the guidebook chapters, each focusing on a special aspect of the Japanese mountains. The monkeys, snow ptarmigan and kamoshika get mentions, as do practical matters such as mountain huts and hot springs to soak in after your climb.


If Tony ever expands his book, there are quite a few more classics he’d like to include – among them, the Genjirō, Komado and Yatsu-mine ridges on Tsurugi, and the Hida Ridge on Hodaka’s Gendarme, another of those compelling lines to the sky. And then there is the unique Japanese river-climbing sport of sawa-nobori – one famous river gorge, that of Oren-dani on Kaikoma, does make an appearance in Tony’s book, albeit as an ice-climb. But the next project, he hints, might be a guide to climbing on Yatsu-ga-take, a rugged extinct volcano near Tokyo best known for its winter routes.

Nobody would dispute that routes such as Kitadake Buttress or Tsurugi’s Chinne – both feature in Tony’s book – are magic lines. Even their names– Chinne as in Gross Zinne, Buttress as in Lochnagar – invite comparison with European classics. But such comparisons might be misleading, Tony suggests. For, if you choose to climb the Japanese classics, don't expect to waft by cable-car onto retro-bolted tracts of sun-warmed granite.

“Chamonix this isn’t,” says Tony. “The rock is often poor quality, and it tends not to take trad gear, leaving you dependent on crummy pitons. But once you’ve got a handle on it, it develops a character of its own – horrendous in situ pro, tatty slings, grassy slabs, and huge runouts are among the recurring motifs. Anyone coming from abroad will be guaranteed an intense cultural experience.”

Now, thanks to Tony’s efforts, the Japanese alpine climbing experience can be downloaded by a new generation of foreign climbers.
Posted by Project Hyakumeizan at 6:23 PM