Masters of the Mittellegi (1)

Pink is not my favourite colour, least of all when it lights up the night sky. Against this flickering glow, the Eiger brandishes his switchblade silhouette. We’re only an hour out, and already a fiasco looms, if not worse. Now, how did we get ourselves into this? 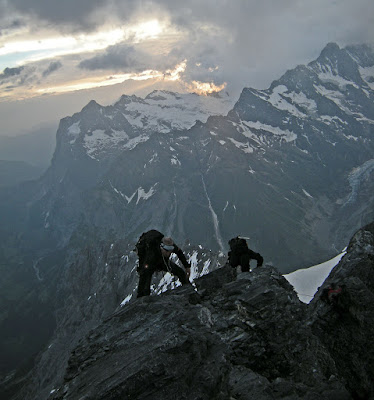 Ultimately, I'm inclined to pin the blame on Walter Weston - even if I have go back a ways to do so. In 1918, the mountaineering missionary was back in England after his Yokohama stint, but he kept in touch with mountaineering friends from Japan. One day, a student from Tokyo called to ask where he should spend his first season in the Swiss Alps. That was an easy question: Weston had fond memories of Grindelwald, where he’d done quite a few climbs in his pre-Japan days ...

Somewhere out beyond Grindelwald, a pink bolt stabs from cloud to ground. No accompanying rumble yet, but I stop trying to kid myself that a power line has shorted, or that somebody is letting off an early-morning fireworks display. This really is a thunderstorm. Now what?

The young Japanese mountaineer was Maki “Yūkō” Aritsune (1894-1989). The son of a Sendai newspaper proprietor, he grew up with both the will and means to climb. After travels with his parents introduced him to mountain scenery, he started his own climbing career with the big volcanoes. Mt Fuji was ascended in 1906, Yōtei-zan in Hokkaidō in 1909 and Aso-san in Kyūshū the following year.

In 1912, now in middle school, he made his first visit to the Japan Northern Alps. That ascent of Shirouma hooked him. After going up to Keio in 1913, he founded a university mountaineering club, Japan’s first. In the same winter, he went to Taguchi to take ski lessons – this just a few years after Major von Lerch had introduced the sport to Japan. Now Maki was a man with a mission.

In 1918, he crossed the Pacific to continue studying at Columbia University. At least, that was the plan. Unfortunately, Maki found the atmosphere on campus so frenetic, after America’s entry into the war, that he couldn’t concentrate on study. So, counterintuitively, he kept going eastwards and sailed to England.

Mountains probably influenced this decision. Not long after his arrival in London, Maki dropped in on Walter Weston, who was always ready to help fellow members of the Japanese Alpine Club, and asked about a good base for climbing.

At last, Maki was there, lodged at the Hotel Adler at Grindelwald. In July 1920, he climbed several of the big peaks in the Bernese Oberland and made a traverse over from the Mönch to the Eiger’s summit via its west ridge. Already, though, it was the ridge on the opposite side of that mountain that interested him – the Mittellegi.

By this time, all the major alpine summits and most of the Bernese Oberland’s big ridges had been climbed. If there was a Last Great Problem, it was the Eiger’s Mittellegi. The ridge had been descended, using long abseils, but so far nobody had managed to climb up the steeper sections. From the grassy meadows of the Faulhorn, Maki studied the serrated ridge through a telescope and planned his campaign. A victory would greatly enhance the nascent traditions of Japanese alpinism…

Yesterday, I’d met up with Martin Burgener at the Eismeer Station, a railway stop hollowed out inside the Eiger. We walked with ducked heads through dripping tunnels to a portal blasted into the mountain’s south face. A delicate move down a corner of wet limestone saw us onto the glacier. A fine afternoon outside, though big bales of cloud were blowing off the peaks across the valley. 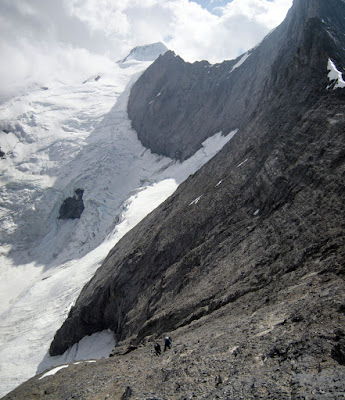 We roped up and set off eastwards across the snow. Let’s move smartly here, Martin said, tilting his helmet to explain why. I looked up – a block of avalanche debris, ponderous as a delivery van, clogged a gully above us. Yes, I agreed, that lot doesn’t seem to have our best interests at heart. Martin laughed, but set off at a swift pace. Welcome to the Eiger. 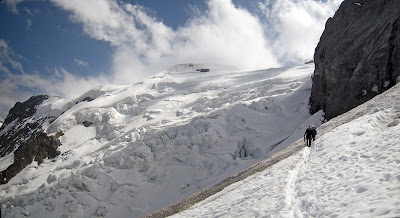 We took off our crampons under a wall of compact limestone. Martin led a short chimney and then, short-roped, we meandered, carefully, across a series of ledges up towards the ridge, as if taking a slantwise stroll across a tiled roof, easy but aerily exposed. Thank goodness we don’t have to come back this way, I thought.

The Mittellegi Hut squats athwart the ridge, braced with steel cables to stop it blowing away. We dropped our gear and went in. The hut warden, bald and bearded, had a genial twinkle in his blue eyes. I didn’t notice for a minute or two that he was wearing a steel leg brace. When we came in, he ticked Martin’s name off on a slip of paper pinned on the back of the door. Only the guides were listed by name – Burgener + 1, Brunner + 1, Andermatten + 1, Bomio + 1, Brawand …


Brawand! Sam Brawand would have to be the man. Maki’s 1921 season had started badly. His usual guide, Emil, went down with appendicitis and then, after Maki had done a few training climbs in Zermatt, the weather turned bad. When he returned to Grindelwald, the Eiger was dusted with new snow. Conditions looked hopeless, but he’d give it a go.

Maki had known Brawand since the winter of 1919, when the young guide had given him German lessons. And they’d climbed several high mountains together the previous summer. Now Maki invited him round to the Hotel Adler and explained his plan. They’d need some help, and so the two Fritzes, Amatter and Steuri, were signed up too. These were Grindelwald’s top men; Steuri had guided more than 400 ascents of 4,000-metre peaks while Amatter had made the first ascent of the Finsteraarhorn’s precipitous east face.

On September 7, Maki met with the guides in the hotel garden to discuss the final arrangements. Apart from the usual climbing gear, they’d need something extra and the village blacksmith was commissioned to knock one out the next day. This ‘secret weapon’ was a three-metre pole with a grappling hook at the top end and spiked feet at the other (see right).

They also amassed about thirty pitons, as well as two thirty-metre and one sixty-metre rope, each braided with the red cord that showed it met the standards of Britain’s Alpine Club. Bivvy gear had to be considered too – a spirit stove, two blankets, extra clothing, and sheets of newspaper for insulation. As for food, there would be raw eggs, roast chicken, ham, sausage, biscuits, bread, butter and jam, and brandy.

On the evening of the 8th, they went round to the blacksmith to collect the climbing pole. Now the tension started to build. From his room in the Adler, Maki watched the sunset steep the Eiger’s north face in roseate light and wondered if it was vainglory or ambition that was driving him into this venture. But, no, that wasn’t it. It was just that the mountain’s attraction was so strong, he had to climb it. Once he’d worked that out, his peace of mind returned, as it always did … 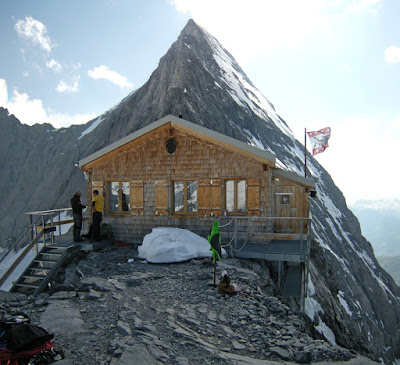 The evening sunlight flooded straight into the hut, untainted at this altitude by any reddish tinge. The western sky was clear; banner clouds still tumbled from the Schreckhorn’s summit opposite. The föhn wind was still blowing hard. We shovelled down macaroni cheese with apple sauce while Martin explained the plan – up at 4am, away half an hour later; no point going earlier, as you need to see what you’re doing when the ridge starts to steepen.

September 9th dawned bright; no clouds in the sky, just a wisp of snow pluming from the Eiger’s summit. The slanting light hinted that autumn was on the way. Maki and his guides stuffed gear into their packs, laced up their tricouni-nailed boots, and double-checked the kit-list.

The Adler’s landlord shook Maki’s hand forcefully; his wife said to come back in one piece, and the maid promised to say a prayer for him. They all came to the station to see him onto the 8.15am train.

At the Eismeer station, the party met up with Steuri, who’d come on an earlier train with the three-metre pole, and made their way down the tunnels. Then they roped down onto the snow and set off across the glacier. 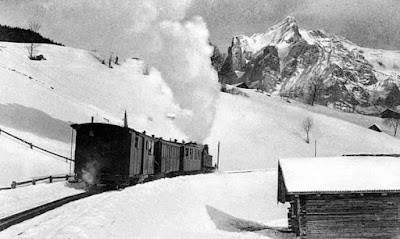 Nobody notices when the stars fade out – we’re too busy watching our footwork as we scramble up and down small rock towers. At 4.30am, we’d left the hut under a starry sky. The air was warm, the rock dry and the plan still looked good. Sign up with a guide – expensive, yes, but this is the Eiger, famed for its suboptimal outcomes – and follow in the footsteps of a pioneering Japanese alpinist. It's a sound plan - what could possibly go wrong?

Now, there it is again – that pink flicker, guttering out beyond the switchblade ridge. A young guide comes clattering down the ridge towards us. Probably an aspirant, he’s yet to master the hallmark imperturbability of the patented Bergführer. “A storm's coming in,” he says breathlessly … 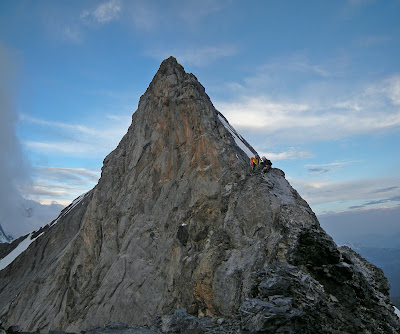 (To be continued)
Posted by Project Hyakumeizan at 9:12 PM

I've been reeled in like a carp on a line by this one! Great stuff, can't wait for the next instalment :)

Great article! Hoping to ask you about your sources. Can you contact me at deuce4 at Bigwalls.net. My research at http://bigwallgear.com. Thank you

John: thanks for the reading. As for the sources, the main one is Maki Yūkō’s account in his memoir, Sankō (“Mountain journeys”), which is still in print from Chuō Kōronsha (in Japanese).