Snow records, past and present

The Financial Times rarely troubles itself with Japan’s hundred mountains. But last week, the pink pages celebrated Ibuki-yama, Fukada Kyūya’s Hyakumeizan no. 89. Writing in the FT’s travel section, Nick Middleton, an Oxford University geographer, marked the anniversary of the world’s deepest-ever snowfall, which was recorded 90 years ago on the summit of this 1,377-metre mountain near Nagoya.


On 14 February 1927, the snow was already more than nine metres deep on Ibuki, when an “astonishing” 230 centimetres fell in 24 hours, bringing the total depth to 11.82 metres. Japanese meteorologists call these large mountain snowfalls “yamayuki” (mountain snows), notes Middleton. They occur when cold, dry air sweeping in from Siberia picks up heat and moisture on its way over the Sea of Japan. You get the drift.

Unsurprisingly, most of that snow falls on the mountains lining the Japan Sea coastline. Yet Ibuki sits as close to Japan’s sunny Pacific seaboard as it does to the traditional “snow country”. This apparent anomaly might be resolved by a glance at the map below. It reveals a gap in the Japan Sea coastal range, through which those cold winter winds can blow through onto Ibuki. (There’s more detail on this blog.) 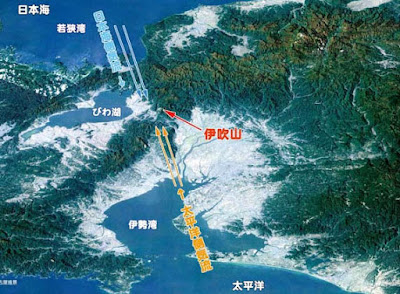 Some years ago, a mid-winter summit climb by meizanologists Chris White and Wes Lang showed that Ibuki-yama still likes to defend her snowy reputation. (The female pronoun is surely justified, as Wes has since named his daughter for the mountain.) If you want to emulate their feat, though, you might want to hurry. Last December, Ibuki set a more ominous record. The first snow fell 22 days after the average date, the most delayed "hatsu-kanmuri" (first snow crown) ever seen on this mountain.

Posted by Project Hyakumeizan at 8:47 PM

How interesting, Ibuki san was always a mountain that totally failed to inspire me mainly due to all the antennae and roads.
I also like the woodblock print and think it's also v similar to the "upturned hull" shape of the other nearby hyakumeizan Ena San.

Good to hear from you, Iain. Of course, Ibuki was very much a "Hausberg" of the Toyohashi Alpinists. I've never set foot on it myself, but I've often been impressed, when passing by on the Tokaido, by how it can wear a snowcap when the landscape all around, and even nearby hills, are all green. As for Fukada, he seems more interested in the mountain's flowers and medicinal herbs than its snowfall. Let's hope they'll tolerate these warming times...

Ah yes, the wonders of Ibuki. The mountain attracts a fair amount of rain the green season as well, and I often use it as a weather gauge for the Japan Alps. Yes, that's right - if Ibuki is covered in cloud then 9 times out of 10 so are the Japan Alps and Hakusan. Of course, my theory has no scientific validity but it definitely warrants some investigation.

By the way, I'm not sure I've ever heard anyone refer to the mountain as Ibuki-san. Even Fukada himself uses the furigana 'Ibuki yama' in Nihonhyakumeizan, and you'd probably be met with funny looks here in Kansai if you used anything other than Ibukiyama

Wes, that's a most interesting "weather-guage" theory you raise - if Ibuki is cloudy whenever Hakusan and the Northern Alps, are, then that goes some way to explaining the exceptional snowfall on the mountain. And, yes, I see from "One Hundred Mountains of Japan" that Ibuki-yama is, indeed, correct. Thanks for picking that one up...