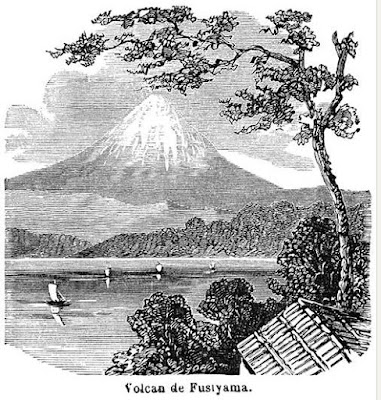 Ink: An early European account of Japan's top mountain, from John Swan's Speculum Mundi; or, A Glasse Representing the Face of the World (second edition, Cambridge, 1643):

"In Japan there is a mountain called Figeniana, which is some leagues higher than the clouds. And in Ternate among the Philippine islands there is a mountain, which (as Mr. Purchas in his pilgrimage relateth) is even angry with nature because it is fastened to the earth, and doth therefore not onely lift up his head above the middle Region of the aire, but endeavoureth also to conjoyn it self with the fierie Element. And of the mountain Athos between Macedon and Thrace, it is said to be so high, that it casteth shade more than thirty & seven miles. Also the mount of Olympus in Thessalie is said to be of that height, as neither the winds, clouds or rain do overtop it. And (although I omit others of exceeding height) it is also written of another mount so high above the clouds, that some who have seen it do witnesse that they have been on the top of it, and have had both a clear skie over their heads, and also clouds below them pouring down rain and breaking forth with thunder and lightning; at which those below have been terrified, but on the top of the hill there was no such matter."