The cross of the Matterhorn (1) 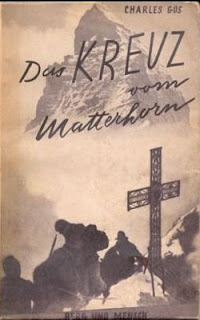 The smuggler must have crossed the Za-de-Zan glacier. He was coming slowly down the moraine, moving with care and taking cover behind the boulders. His odd demeanour was explained by the huge sackcloth bag he was carrying on his back. The rushing stream drowned out the sound of the stones grinding under his feet. Thinking for a moment about his route, he made for the paths and couloirs below the cliffs of the Tour de Creton, as if aiming for the grassy ledges that seam the scree slopes looming over the hamlet of Prarayé.

Let’s not foul up here, Jean-Joseph, the man grumbled to himself as he walked. You’re sticking your neck out a long way as it is, strolling through here in broad daylight. What a life, always creeping around, always on the qui vive, always looking like you’ve got something to hide. Still, a man’s got to live. And it wouldn’t be a bad life without these bastard customs officers. Better put out that pipe, mate; they’ve got good noses, the bastards.

Jean-Joseph tapped his pipe on the handle of his iron-ferruled stick, blew the last ashes out of it and put it in his pocket. The morning was getting on, the sun riding high. Meltwater burbled off the glaciers. Small pools glittered, green and gently rounded. Except for its usual murmurings, the mountainside was quiet. And Jean-Joseph, always wary, bent under his load, paused to think about his route, seeming to sniff the air and his way, and went on, still hugging the rocks.

Suddenly, the whine of a bullet pierced the silence. A shred of white smoke puffed into thin air over by the moraine. A dry report went rolling across the glacier of the Grandes-Murailles, scaring off a covey of snow partridges, and the smuggler fell ponderously backwards.

A kind of trance followed the thunder of the gunshot. Then there were only the groans of old Jean-Joseph, dying alone among the rocks, under the blue sky and the beautiful sun. He was dying, and he couldn’t grasp a thing, not even who’d shot him. The drama had played out, devastating, incomprehensible. And down there, over by the moraine, a customs officer was slowly lowering his rifle, its barrel still smoking ...