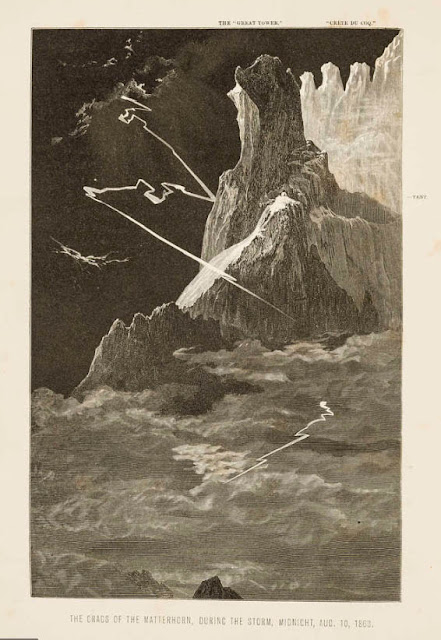 Image: The crags of the Matterhorn during the storm, midnight, August 10th, 1863, woodcut by Edward Whymper, from Scrambles among the Alps in the years 1860-69.

Three Japanese had been overtaken on the Zmutt Ridge by a thunderstorm, and one had fallen, breaking his hip. So the trio had to be brought down the mountain. When the first thunderstorm had gone by, Leo lmesch and I flew off with Sigi Stangier as pilot and a rescue assistant. Before that, the mountain guides Bruno Jelk and Ludwig "Lutschi" lmboden had already been brought to the accident site. Because of the powerful downdrafts, we had to get out of the helicopter as it hovered below the Zmuttgrat’s snow ridge, as Sigi could not fly it any higher up. The next thunderstorm was now coming up from the southwest. Leo suggested leaving our ice-axes here and said "If you have any gold teeth, they’ll be blown right out of your mouth today!" And as he climbed, he sent up a quick prayer: "God save us and the other punters."

We climbed up through the towers on the ridge and joined the others further up. Bruno Jelk and "Lutschi" had already put the casualty on the rope, and we took the other two between us and followed them. Now we were in the middle of the storm. Heavy snowfall and downpours alternated, strong gusts of wind did their utmost. Huge bolts of ball lightning, up to 50 meters across, exploded with deafening thunderclaps right next to us. Every time they did that, blocks of rock started rolling, and it reeked of sulphur. Again and again, the static kept building up in the air, which felt as if a cat was biting the back your neck.

Leo took the lead back through the towers, with me belaying him. Then one of his crampons came loose. He came back to fix it. At that moment, there was another explosion, even more powerful. Just where we’d been before, two man-high boulders slowly tilted out of the ridge. They would have taken us with them down the west face. So God did save us punters. Below, from the snow ridge, Sigi was able to fly first the casualties and then ourselves back to the village.
Posted by Project Hyakumeizan at 8:22 PM