22/23 October, Fukui: typhoons are no respecters of anniversaries. The twenty-first of the season roars into town like a motorbike gang. All night, the Sensei’s house creaks and shudders in the gusts, as the trees in the garden lash to and fro.

Fukui gets off lightly: when the rain stops, one neighbour’s shrubs have taken on a rakish downwind tilt, and the house next door has lost a mosquito screen. Fortunately for our peace of mind, we haven't yet found out how high the river has climbed up the nearby embankment. At mid-afternoon, squalls still blot out the inland mountains while a rainbow stretches over the town.

The anniversary we want to mark is Monk Taichō’s. Thirteen hundred years ago, in the first year of Yōrō (717), he set off over high wooded ridges to climb Hakusan (2,702 metres). That much one can glean from Japan’s most famous mountain book.

According to the Hyakumeizan author, this made our local Meizan one of Japan’s first mountains to be “opened” for religious reasons. But the typhoon will have dumped a good few centimetres of new snow up there; and probably dropped some trees across the approach road too. 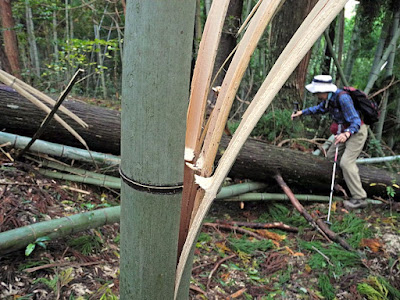 26 October: if we can’t climb Hakusan, we’ll commemorate Taichō Daishi by revisiting Ochi-san (613 metres), the hilltop west of Fukui where he first went to meditate. On a bright morning, the Sensei drives her van over a wooded pass into a deserted valley – not a soul is to be seen around the few houses – to the parking place under the ridge. 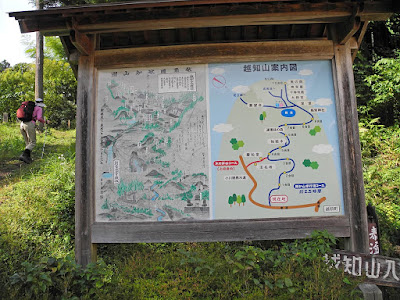 A signboard shows Ochi-san as it was in the heyday of popular pilgrimages, some centuries ago. It’s a quieter place now, with most of its sanctuaries and shrines vanished away. 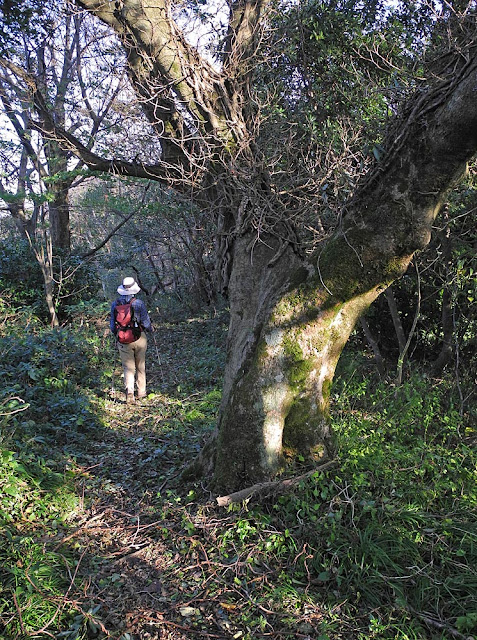 The typhoon has carpeted the path in stripped-off pine-needles and shredded leaves. Half-way up the ridge, we meet a young couple coming down. They’ve turned back, they say, because fallen branches have blocked the path. This is true, but we manage to crawl or clamber through. More attention has to be paid to broken tree limbs hanging, Damocles-style, over the heads of the unwary. 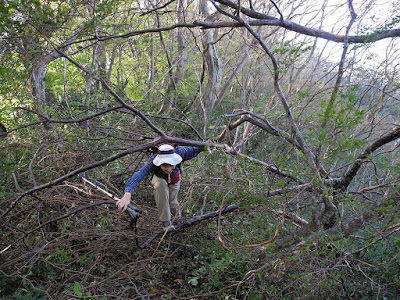 Seeing the swathe carved through the forest, we wonder if we’ll find the priest still in residence at the summit shrine. No need to worry. Ōtani-sensei looks out as we come down into the grove in front of the shrine building. “Still together, I see,” he opens (we happen to be attired in matching blue hiking shirts). To which the Sensei rejoins, not missing a beat “Obviously, your blessing worked then.” 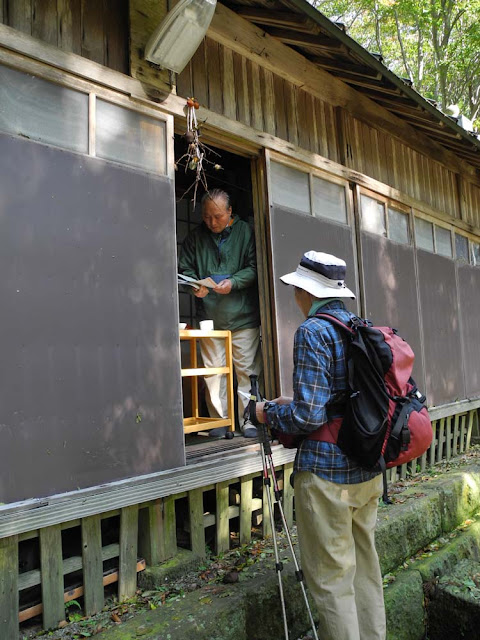 As last year, we’re invited to lunch. Ōtani-sensei shares his delicious cockleshell soup, and we bring out the Sensei’s industrial-grade onigiri, some fruit and a Swiss nut pie. We’re impressed to hear that Ōtani-sensei rode out the typhoon in this very house – the main shrine building went undamaged, but the nearby glass-fronted gallery for jizō figurines had a narrow escape when a red pine bough crashed down just in front, ripping off a roof gutter.

What was it like up here on that wild night, we ask. Ōtani-sensei brings out a large sheet of traditional Echizen paper on which he has ink-brushed his account of the storm. “Surely, this is a fair copy?” asks the Sensei, struck by the elegance of the script – no, he just wrote down his impressions as they occurred to him. He also gives us a copy of a local newsletter, to which he contributes a quarterly essay, one for each season.


The talk turns to Taichō. Ōtani-sensei reassures us that the 1,300th anniversary of his Hakusan climb is being celebrated all over the prefecture, in shrines, temples and museums. He hands us a brochure with a map that shows some of these places: 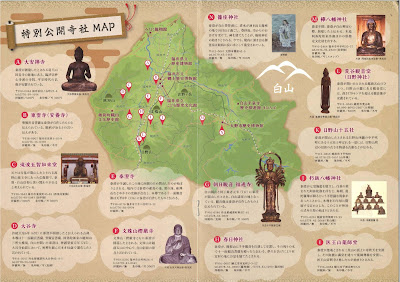 Echizen-chō, the township that surrounds Ochi-san, has even produced a commemorative pamphlet. Who is Taichō?, it asks rhetorically (in English), and one suspects the present tense is used advisedly. The narrative, rendered from the Japanese, begins like this:

Taichō was born in the 11th year of Emperor Tenmu’s reign (682), in the village of Asōzu in the province of Echizen (in the southern outskirts of today’s Fukui City). As a boy, he used to make Buddhist images out of clay, so that he grew up quite unlike other children. One day, a monk who was passing by to spread the Buddhist faith recognized Taichō as divinely inspired, and urged his parents to give special attention to his upbringing. At the age of 14, Taichō was commanded in a dream to carry out austerities on Ochi-san, and so he ran there every night (a distance of 15 kilometres, one way) to meditate, before running home…

I look up from the pamphlet – time is wearing on. We thank Ōtani-sensei for his hospitality, and he hands us two tickets for an exhibition on Taichō at the Fukui Prefectural Historical Museum. Those who are truly in search of the Daishi had better see it. Then we step out into the sunny afternoon and make our way up the stone steps to the summit sanctuary. To the east, Hakusan’s new snows glow numinously through the hazy air. This must be the very spot where Taichō first aspired to that distant summit. 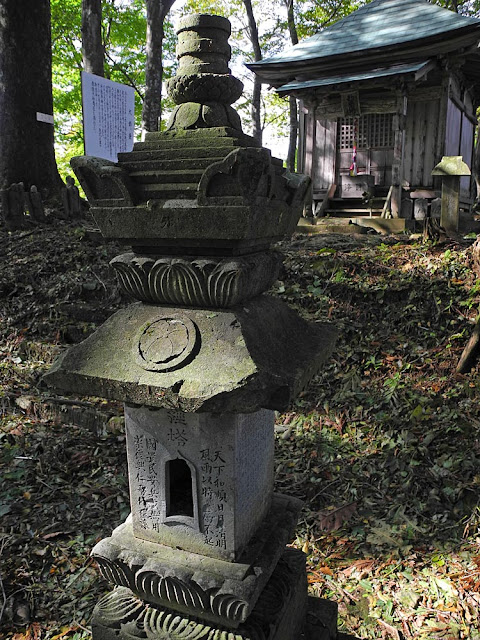 On our way down, outside the storm-damaged gallery with its red-bibbed jizō statues, we meet two middle-aged men from Gifu. In this anniversary year, they are making a round of all the places linked with Taichō, they say. They'll be busy, then: the monk is said to have “opened” five mountains in Echizen alone. And this is to say nothing of all the temples, shrines, lakes and waterfalls that claim some association with him.

One thing is clear. Anybody who wishes to follow the master will have a lot of ground to cover. 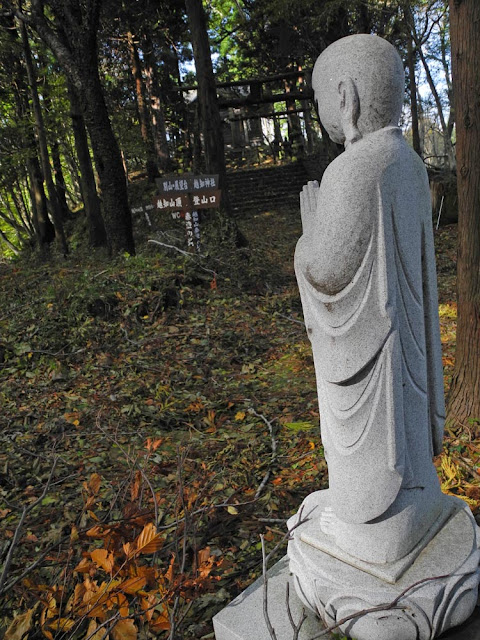 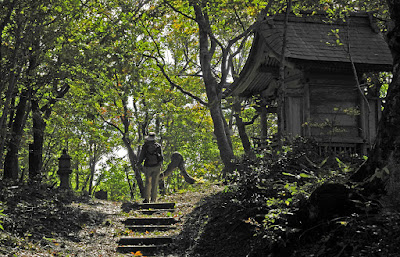 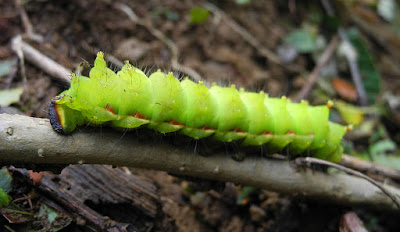 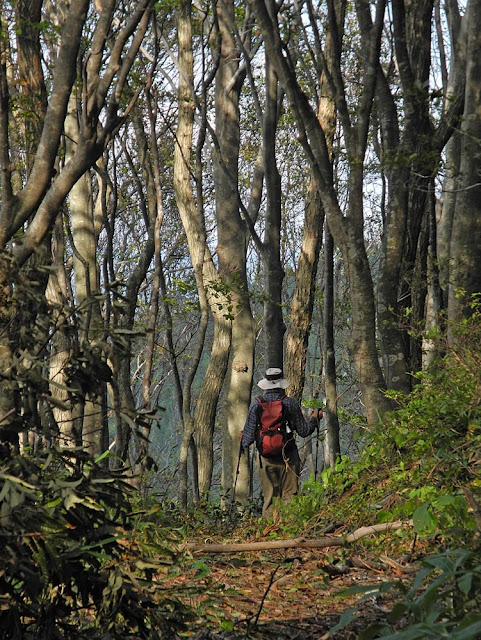 Posted by Project Hyakumeizan at 9:41 PM