"Mode of Travelling in the High Alps" (1) 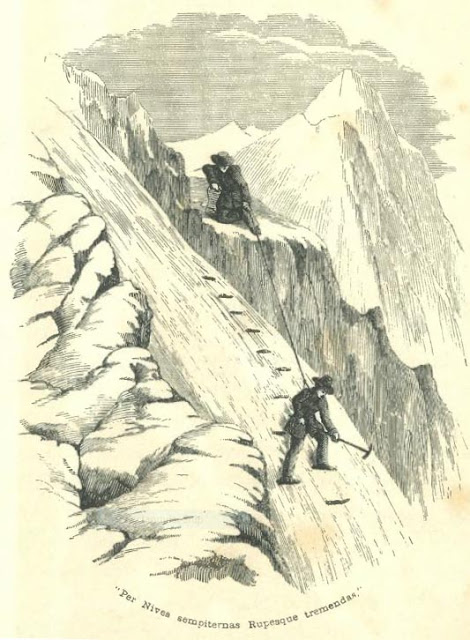 This subject requires a few words of allusion to the difficulties and dangers incident to travelling in a region where excepting steep faces of rock, the surface is covered with snow or ice. These may at once be divided into two classes - the real and the imaginary.

Where a ridge or slope of rock or ice is such that it could be traversed without difficulty if it lay but a few feet above the level of a garden, the substitution on either side of a precipice some thousands of feet in depth, or of a glacier crevasse, makes no real difference in the work to be executed, but may act intensely on the imagination of a traveller.

The only means for removing this source of danger is habit; those who cannot accustom themselves to look unmoved down vertical precipices, and, in cases of real difficulty, to fix their attention exclusively upon the ledge or jutting crag to which they must cling with foot or hand, should forego the attempt to take part in expeditions where they will not only expose themselves to danger, but may be the cause of equal danger to others.

Posted by Project Hyakumeizan at 6:45 PM

There's a parallel here with martial arts. Whether you avoid an incoming strike by 5 or by 50 centimeters, you've still safely gotten out of the way.

Now if only I could convince my fear of heights.