Visitors to this blog will soon come across the term “Meizan”. But what exactly is a Meizan? Those in search of an answer would do well to consult Craig McGinty, a professional Japanese-to-English translator and a pioneer of Hyakumeizan studies in the English language. 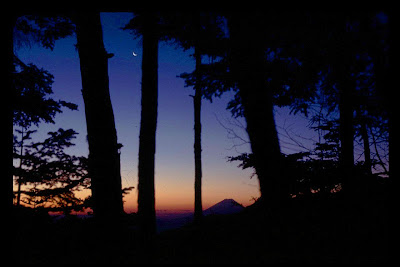 In his paper Making a Mountain of Mountains: The Term 名山 According to Fukada Kyuya, McGinty argues that it is misleading to translate 名山 simply as “famous mountain”, as the Japanese characters for ‘meizan’ might suggest.

Indeed, he points out, some of the mountains that Fukada Kyuya chose for his magisterial “One Hundred Mountains of Japan” were distinctly obscure, at least until Fukada summoned them into the limelight.

So if a Meizan is not necessarily famous, what distinguishes it? The best definition, suggests McGinty, is the one provided by the Hyakumeizan author himself. In the afterword to his book, Fukada stipulates that mountains must fulfil three conditions to be included in his list:-

First, a mountain must have stature. It must be a mountain that anybody would rejoice to see. Height alone is not enough. I reject run-of-the-mill mountains. I reject mountains that lack the severity or the power or the beauty to strike people to their hearts. Mountains have character in greater or smaller measure, just as people do. Mountains, like people, must have character.

Secondly, I attach great weight to a mountain's history. No mountain with deep and long-standing links to humankind could be excluded from my list. A peak that people admire from morning to night, that they crown with a shrine, necessarily qualifies as an "eminent mountain". A true spirit of reverence inheres in such places …

Thirdly, a mountain must have an air of distinction. A mountain with this quality calls attention to itself as surely as a distinctive work of art. What I value is the essence, be it of form, feature, or heritage, that makes a mountain uniquely itself. I do not concern myself with humdrum, run-of-the-mill mountains. It may be true that, as all mountains are different, all have distinguishing features. But this is not enough. What I look for is an extraordinary distinctiveness.

Additionally, I stipulate an altitude of at least one thousand five hundred metres. This does not mean that I respect mountains simply for their height, but only that a mountain must have a certain stature to enter the lists … For the reasoning behind my two exceptions to this rule, Tsukuba-san and Kaimon-dake, I refer you to the relevant chapters.

Yet, as Fukada admits, an element of chance as well as individual taste creeps into any selection like this one. A mountain could only advance into the ranks of the Hyakumeizan if Fukada had himself climbed it.

Thus, he records, “I would dearly like to have included Oizuru-ga-dake or Ō-kasa-yama from the Hakusan range of the Hokuriku. Not only was I partial to these mountains of my home town, but I hoped to introduce their hidden charms to the wider world. Unfortunately, I had climbed neither, so there was nothing for it but to pass on with a sigh of regret.”

Ultimately, Fukada concludes, the One Hundred Mountains of Japan represent a personal choice and he makes no claims for them beyond that. And, he adds somewhat mischievously, “if there is a chance to reprint the book, I may well change a mountain or two.”

For good or ill, it is too late for that now. Marked on every hiking map and enshrined in scores of spin-off books, the Hyakumeizan are now firmly embedded in Japan’s mountain traditions.

Nihon Hyakumeizan by Fukada Kyuya, in the forthcoming translation as “One Hundred Mountains of Japan”

Making a Mountain of Mountains: The Term 名山 According to Fukada Kyuya, by Craig McGinty, in the JLD Times, newsletter of the Japanese Language Division of the American Translators Association

Photo: one Hyakumeizan from another - Mt Fuji at dawn, seen from mid-height on Kaikoma
Posted by Project Hyakumeizan at 9:39 PM

I've heard many say that the proliferation of visitors to the meizan has affected their character for the worse. But I can't help thinking that for some at least the resultant elevated status has also proved a blessing, and maybe saved them from some of the more egregious ravages of modern time. Would Bukozan in Chichibu (formerly a stunning mountain, to judge from the old photos) have been half destroyed by the cement companies were it on the list? Maybe the answer is still yes, but I like to think that meizan aficionados would have at least put up a fight.

That's a most interesting perspective on the effects of Hyakumeizan-ization, Chris. And I think it can definitely be said that not one of Fukada Kyuya's list has (yet) been eroded down to sea-level by the hordes of Hyakumeizan baggers ....

It is very interesting for me to come across this information now. I have been translating the name as 100 Famous Mountains, though by now the list has surely made them all famous. But it is also true that I also came to understand that famous is not the best term to use in translating "meizan". I think there is actually no English equivalent of the term except perhaps words like "noteworthy mountains" or "mountains of interest." Still even these don't satisfy the meaning of meizan.

I confess I have struggled with this translation as I considered how to write in my photo book of the Japan Alps and also as I started (and stalled temporarily) a wordpress blog dedicated to compiling a list of 100 mountains of Canada. Though at first I set out a clear criteria, I have found myself faced with the fact that some mountains that meet two or three of the criteria are still quite obscure and have only been climbed a few times ever. But perhaps that is the nature of mountains in Canada and Canadian culture. We know the names of the lakes better than the mountains that fill the sky in the background. It has occurred to me that, like Fukuda's list, if mine were ever to gain much attention it might just help pull some of those colossal and beautiful but obscure peaks into the limelight, However weak that light might be in a country of Canada's relatively small population and immense size, where national treasures are more locally known than anything else.