Naming mountains after people can lead to unforeseen complications
Johann Wilhelm Fortunat Coaz (1822-1918) has an alpine hut named after him, but no mountain peak. That is probably how he would have liked it. In the Swiss Alpine Club’s yearbook for 1865, the eminent Swiss surveyor, forester and alpine pioneer set out his position as follows:

By and large, naming summits after people is not something that I can favour. I feel that it is presumptuous of our generation to associate our fleeting lives with mountains that are hundreds of thousands of years older than we are, and that will outlive us by an equal span.

Two years previously, Switzerland’s ruling council had summarily rebranded the country’s highest summit, in honour of an even better known surveyor than Coaz. Thus it was that Monte Rosa’s Höchste Spitze transitioned into today’s Dufourspitze (4,634 metres).

Whether or not it was this episode that got Coaz’s goat is unknown to this blogger. But, in general, it seems that most of his countrymen have always agreed with him: mountains should not be named after people.
Yet, even in the Swiss Alps, a few exceptions crop out. As noted in the previous post, the Austrian surveyor Ludwig von Welden (1780-1853) did name a few subsidiary peaks of the Monte Rosa massif after their early pioneers (including himself). This was in the 1820s. But he bestowed these names from the Italian side of the massif, even if they were afterwards acknowledged on Swiss maps too.

Some years later, though, a sprinkling of entirely Swiss family names appeared on those maps. And, unlike the Monte Rosa subpeaks named by von Welden, which straddle the Swiss-Italian border, the mountains so affected lie entirely within Switzerland.

It is here, in the remote Grimsel region, that we find an Escherhorn, an Agassizhorn, a Desorstock and a Studerhorn, among others. These names can be traced back to a sunny evening in 1840 at the “Hôtel des Neuchâtelois”. This was a large boulder that served as a summer bivouac for a group of largely French-speaking natural philosophers while they pursued their investigations into the icy world around them. The work was led by Louis Agassiz (1807-1873), soon to win fame as the leading proponent of a former Ice Age.


After a hard day’s work probing into the secrets of the Unteraar Glacier, the assembled savants asked their guide what the surrounding peaks might be called. Jakob Leuthold, a local man from the Haslital, replied that, except for the Finsteraarhorn and the Oberaarhorn, none had names. Whereupon the savants decided to fill in these blanks on the map. So, starting with the Scheuchzerhorn, to honour an eighteenth-century pioneer of alpine research, they proceeded to memorialise some more recent scholar-mountaineers, including themselves. 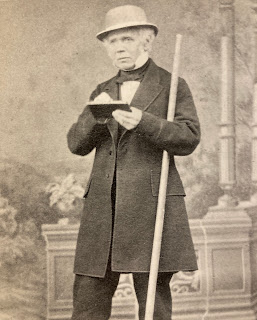 “Memorialised” may be to overstate the matter. For sure, these names still appear on Switzerland’s official maps. But, after less than two centuries, their associations with historical figures are already fraying at the edges. Take the Studerhorn. Already people have difficulty remembering – and agreeing – which of two candidates it might commemorate. Was it Gottlieb Samuel Studer (1804-1890, right), a founder of the Swiss Alpine Club, or, perhaps a shade more likely, his cousin, the eminent geognost Bernhard Rudolf Studer (1794-1887)?

By contrast, nobody can forget whose name adorns the Agassizhorn. And that is the problem. For after catapulting himself to worldwide fame for his glacial researches, the great scholar crossed the Atlantic to become a professor of geology and zoology at Harvard University. And there, much later in his career, he published views about the origins of the human race that have since become incendiary.

As a result, some propose that the Agassizhorn should be “cancelled”. In 2008, Sasha Huber, an artist of Swiss-Haitian heritage, flew in a chartered helicopter to its summit. There she planted a placard calling for the peak to be renamed the “Rentyhorn”, after an ex-Congolese slave whom Agassiz had caused to be photographed in support of his theories.

To date, the Agassizhorn can still be found on the official maps. But even if it were to be rebranded, that would still leave a plethora of geographical features named after the glacial pioneer, including several more mountains, all in North America, to say nothing of a glacier and a creek, as well as a Crater Agassiz on Mars and a main-belt asteroid.

It will probably be a while until the world sorts through all the historical complexities that can arise from naming mountains after actual people. Until then, Coaz’s sound advice, as quoted above, might deserve some wider consideration.

Thank you for the three posts on mountain names. I can't believe I've never given any thought to this topic previously. After reading your posts I went on directionless journey searching on google and ended up on the SAC website Allalinhorn page. I was interested to read that the origin of the Allalinhorn name is a mystery and may have Saracen arabic origins:

"The riddle of the name is the dot on the "i": Allalin ... it sounds strange. It may be a name that the Saracens gave to this mountain over 1000 years ago. In Arabic, ala'i-ain means the source (also "source mountain"). In the Saas Valley you call the mountain "ts Alle'lii". The name remains a mystery."

On a personal level this interested me. I once made an early morning trip from Abu Dhabi out to the town of Al Ain for a cycling ascent of the local peak Jebel Hafeet. Had never considered a link between the UAE town of Al Ain and the Allalinhorn.

Any other Swiss mountains with potential names of arabic origin?

Hoi, Iain, and thanks for reading. Mmm, yes, the Allalinhorn is an interesting case - the thesis that it was named by the marauding Saracens is widely found in the literature. And it's true that the Saracens did maraud around these parts in the ninth and tenth centuries. But if they pillaged and sacked (etc) as far north as Chur, as some records aver, why isn't the whole of present-day Switzerland sprinkled with Arabic-sounding place and mountain names? One surprise that awaited me when I started reading about mountain names is that they are often very impermanent - they drift from one mountain to another, they get transcribed wrongly, they go out of fashion etc etc. So many are more recent than one would expect. I wonder how far back the Allalinhorn name is attested?