The sawa of light

“So you’re not going to take us to Akagi-sawa, as you promised,” said Chiemi at our alpine club’s monthly meeting. Chiemi is from Osaka, a city where they don’t do subtlety. She was also our capable and efficient secretary, who kept the club from falling apart. I did some reckoning. September was almost over and the first snows can fall on Japan’s Northern Alps early in October. There was no time to lose. “OK, we leave on Friday night.” 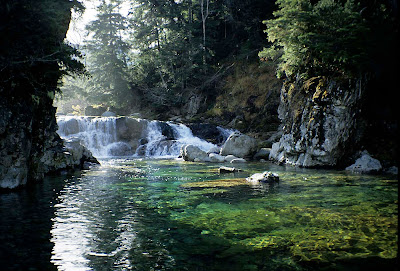 Osaka folk are known for their good taste, as well as their assertiveness. Chiemi had picked an objective that no discerning sawa climber should miss. A “sawa” is the Japanese word for a canyon, a glen, a gulch, you get the drift. Or rather it isn’t. A canyon calls to mind a dusty gorge where cacti and tumbleweed jostle for a thin trickle of water. A glen is a burn prattling its way between heather-lapped granite boulders. As for a gulch, let’s not even go there; the perils of translation are many enough already. 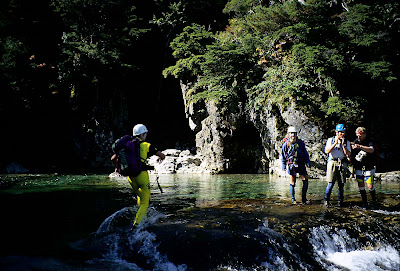 Suffice it to say that a sawa starts as a rill on some cloud-capped ridge, threading its way through thickets of creeping pine, before gathering force, cascading down into forests of beech or cedar, leaping over waterfalls and brawling down rapids. Sawas can be Mirkwoods, sombre and menacing, or light and aery, like Rivendells. Of these, the lightest and aeriest is Akagi-sawa. Small wonder that Chiemi had set her heart on it. 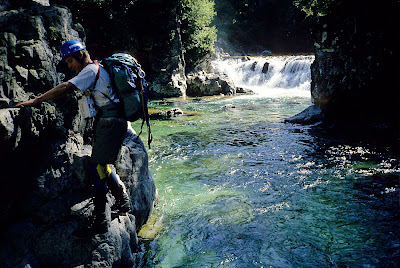 So, at 9pm on October 7th, the Subaru lurched out of its parking bay with a full stick of five mountaineers aboard. Unfortunately, this was the Friday before a fine three-day weekend and the whole of Tokyo wanted out. We crawled for hours in nose-to-tail traffic until, in the wee hours, we broke free and cruise-climbed into the highlands of Shinshu. It took until 7am to reach Oridate, the end of the road. Such are the preliminary austerities that must be performed by city-dwellers who would seek the enlightenment of Akagi-sawa.

After the crowds of Tokyo, this flank of the Northern Alps seemed extraordinarily empty. Once there was a village here, but now it lies at the bottom of a reservoir. The story is told in Fukada Kyuya’s “One Hundred Mountains of Japan” (Hyakumeizan): “This place, Arimine, was the traditional starting point for Yakushi, but we arrived only to find it had fallen into disuetude. The villagers had sold their ancestral lands to a hydro-electric power company and, pocketing the money, had left their mountain home for ever. Here and there remained a derelict hut, propped up on rotting pillars. A row of gravestones in the untended grass completed the picture of desolation.” 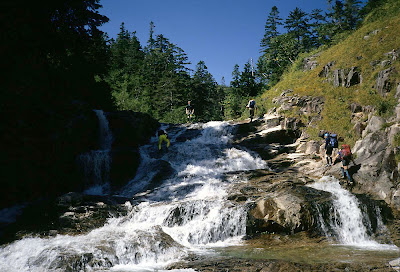 We shouldered our packs and set off up a well-made path towards the Taro-yama pass. Near the top, black-and-white martins (iwa-tsubame) still flitted to and fro, pushing summer to its limits, just as we were. Their big brothers, the alpine swifts, had already flown off south. In the afternoon, we dropped down into the Kurobe valley and arrived to a hospitable welcome at the Yakushi-zawa hut. We may have been the last guests of the year.

We turned in early. As the hut stands on a wooded promontory between the mighty Kurobe river and a lively tributary running down from Yakushi-dake, the sound of tumbling waters is louder than central Tokyo’s traffic. Yet, even at this volume, there is something immensely calming and soporific in the rushing of a mountain torrent. Its sounds must be non-random, something like the contrabass in a symphony. Whereas traffic noise, especially in Tokyo, must be truly “white” or chaotic… I fell asleep before these thoughts could be pursued.

At breakfast (green tea, rice and pickles), the phrase “aki no kehai” (秋の気配) floated into the conversation. Outside, one could indeed smell autumn in the air. Those who had wet suits donned them. We set off upstream. For the first hour or so, we moved in the green shadow cast by the looming massif of Kumo no Daira, the Field of Clouds. Fortunately for those who hadn’t brought them, the wetsuits weren't needed; thanks to the lateness of the season, we could wade passages of the river that would have to be swum in high summer.

A knight’s move across a slab gave us the freedom of the De-ai, the pool where Akagi’s stream flows into the main gorge. Shafts of light filtered between the cedars, conjuring wavering circlets of golden light in the shallows. Is this one of the most beautiful places on the planet, I wondered. If so, it competes for the title with stretches of Akagi-sawa itself. We traversed into the tributary on a rock ledge, then waded up easy slabs through rushing sheets of water. Leaving the stately grove of trees behind, we exchanged its cool green light for the boundless radiance of an open mountain sky. We leapt over boulders, sometimes avoiding waterfalls, sometimes climbing them through the falling water. The mood was pure holiday; we were at play in a sawa of light.

Sobriety was restored by a holdless wall of black rock over which the river plunged free into a foaming cauldron. We accepted the gentle admonition and, switching our heads back into ‘climb’ mode, took to the broken-down cliff to our right. High above the river, we scrambled back onto flat ground through a miniature wood. Its gnarled and stunted pine trees might have graced a temple garden, so faithfully does nature in this sawa imitate art. 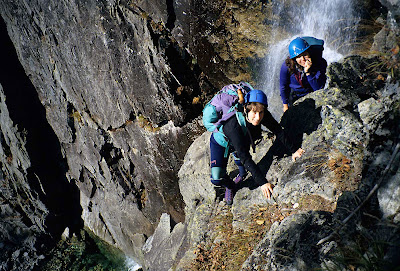 Above the waterfall, we took Akagi-sawa’s right-hand fork, heading directly for the summit of its namesake mountain. By now, we were wading, if at all, ankle deep, the water’s force sapped by every side-stream that we passed. (In this, a sawa climb is somewhat like one of those modern novels where the story is told backwards. To a passing sawa climber, tributaries appear to subtract their water from the main river rather than contribute it.) The stream dwindled to a rill and then a trickle. We stepped out of the sawa just before it ended, or rather began, in a bank of tumbled earth. The guidebook remarks on a “bright field of alpine flowers” (明るい花畑) at this spot, but only withered stems remained at this late season. After divesting ourselves of sawa gear, we walked on towards the skyline ridge. 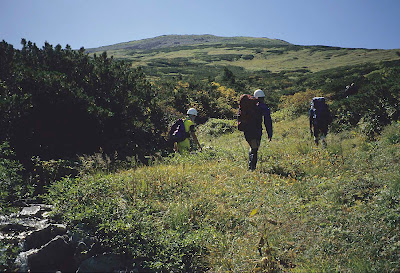 Late that night, the Subaru was running northwards towards the cliffs of Oyashirazu, where the Northern Alps march down to the coast. In the left-hand seat, Chiemi was looking out to sea, where a bright lane of stars arched toward the horizon. “荒海や佐渡によこたふ天の河,” murmured Chiemi, quoting some fusty old haiku master. (“Over the ocean spray, all the way to Sado Island, stretches the Milky Way.”) Our secretary had enjoyed her weekend. 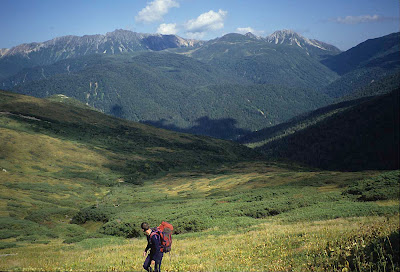 Sawa guidebook to the Kanto and surrounding regions (関東周辺の沢、若林岩雄他著) by Wakabayashi Iwao, Hakusan
Posted by Project Hyakumeizan at 8:52 PM

About a decade ago, I also went there with a friend of mine. The memory of our trip was fondly remembered reading your story. It was as beautiful a trip as yours. Thanks for having me remember that beautiful sawa trip deep in the Japan Alps. I also liked the story of Chiemi murmuring Basho's haiku. What a beautiful ending...

A nice account, and some great photos to go with it (I'm especially taken with the first one). It'll soon be sawa-nobori season again...